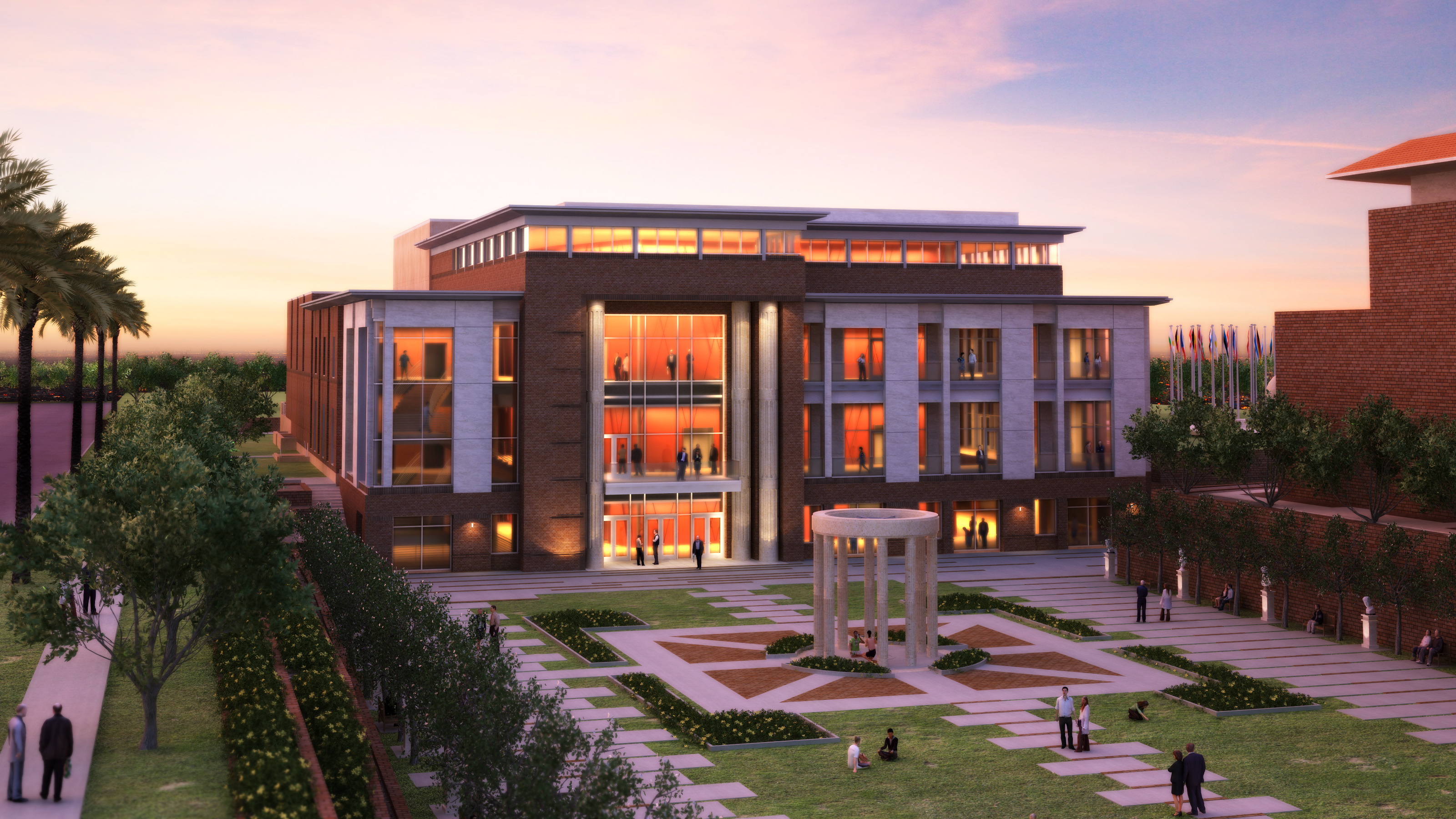 An artist's rendering of the center, designed by Pfeiffer Partners Architects.
Arts & Film

Heralded by trumpeters and shaded by an open-air tent and colorful paper parasols, nearly 300 people gathered Thursday for the groundbreaking of Chapman University’s Marybelle and Sebastian P. Musco Center for the Arts on campus, where opera great Placido Domingo helped turn the first ceremonial shovel of dirt.

Domingo praised the University and its arts supporters for having the passion and generosity to embark on the $64 million facility.

“Unfortunately, the arts are seen as expendable, the first thing to be eliminated when money is scarce,” he said.  But some people, like Paul and Marybelle Musco, understand that our culture is what makes us human.”  A number of Chapman alumni have gone on to work and continue their training with LA Opera, where Domingo is general director.

The Muscos co-chaired the successful fundraising drive to build Musco Center, the naming of which was announced at the groundbreaking. In making the announcement, President Jim Doti recalled a story Trustee S. Paul Musco told of his father buying a $15 RCA Victrola the immigrant Italian family could scarcely afford. But Musco’s father promised that the Victrola would provide “food for the soul.” The Muscos’ support for the Center for the Arts is a bit like that old Victrola, for it will help nurture the arts in Orange County and beyond for generations to come, Doti said.

“It’s dance, it’s theater, it’s music that not only brings civility to the world and makes us happy, it’s the glue that binds our culture and the ties that bind the cultures of the world. And I will go even one more step and say it’s the arts that bring stability and make us happy, but even more importantly bring meaning to our lives and make life worth living,” he said.

In her remarks, Marybelle Musco also underscored the importance of supporting the arts in the community at large and at Chapman, where the couple’s grandson, Alex David, class of ’09, studied theater performance, and applauded those who gave time and resources to the center’s successful campaign.

“Thank you, thank you again and again. We’ll never be able to say it enough. This is a dream come true,” she said. “The arts are the basis of the civility of our society. Without it we lose joy and love for humanity. It is so important.”

When completed, Musco Center will be one of the largest and finest at any university in Southern California, and comparable to professional venues in Los Angeles and Orange County. Thanks to a $4 million gift from the Kay Family Foundation, the new center will be fully equipped with the latest in state-of-the-art technology.  Such new staging mechanics and systems will allow the 83,000-square-foot facility to serve multiple purposes in a single day, said Bill Hall, D.M.A., dean and artistic director of the Musco Center for the Arts.

“Let’s say in the morning we’ll have students from the city schools here in Orange. We’ll have a children’s opera for them, or our youth orchestra, or something that’s going to reach out to them – a ballet for young people … and then in the evening we can have a grand performance of a full opera,” Hall said.

Moreover, Hall added that the cutting-edge acoustics to be designed by Yasuhisa Toyota, celebrated for his work on Disney Hall, will enable Chapman to successfully stage “any show” in the center.

Musco Center for the Arts is expected to be completed in early 2015, with a “soft opening” to allow the hall to be fine tuned. A grand opening will follow later in the year.