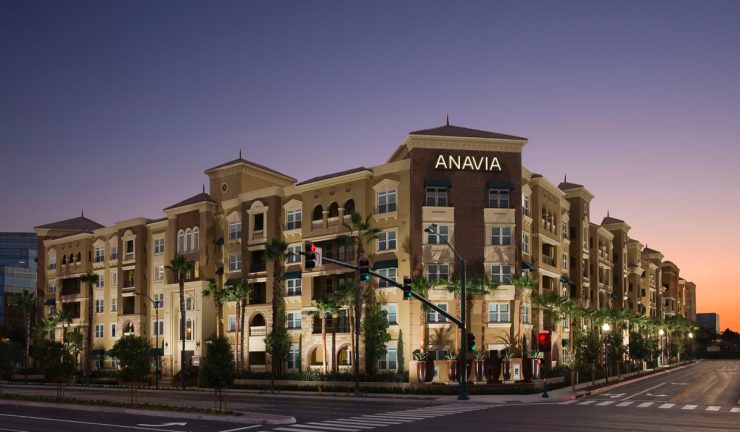 Chapman University has acquired the Anavia building in the Platinum Triangle area of Anaheim, two blocks away from Chapman Grand. The new residence hall will be named Chapman Court.
University News

On Nov. 16, Chapman University announced the acquisition of a new apartment building in Anaheim’s Platinum Triangle that will provide a significant increase to the number of students who can reside in campus housing.

The new residence hall, which will be named Chapman Court when it officially opens, is located at 2045 S. State College Boulevard, just two blocks away from Chapman Grand. The building will offer individual unit amenities, including washers and dryers in every apartment, a full kitchen with high-end finishes and appliances, and a large on-site fitness center. The Chapman Shuttle service will provide transportation to and from campus, removing the need for students to drive personal vehicles to campus.

“The campus residential experience is an important part of what makes the Chapman student community so meaningful,” says Harold Hewitt, executive vice president and chief operating officer. “These apartment-style residences give students a chance to live independently without cutting them off from the campus community.”

“With hundreds of millions invested in student housing over the past several years, the university’s commitment to house 50 percent of our undergraduate students on campus remains strong. This building also has the additional benefit of being self-parked and accessible by our shuttles, which will reduce traffic and parking issues,” said Hewitt.

Increasing student housing is a continuing goal for the university, and the new building will raise the university’s capacity to almost 55 percent of the undergraduate population.

At Chapman, first and second-year students are required to live in campus housing, but in recent years the university has seen a dramatic increase (175% between 2017-2019) in juniors and seniors requesting campus housing due to the appeal of apartment-style housing options.

“I am extremely excited to be adding an additional residence hall of the caliber of Chapman Grand to our student housing options,” said Chapman University President Daniele Struppa. “We have seen remarkable success with the Grand, and I look forward to creating a similar experience with the new Chapman Court.”

The date of student occupancy is yet to be determined.