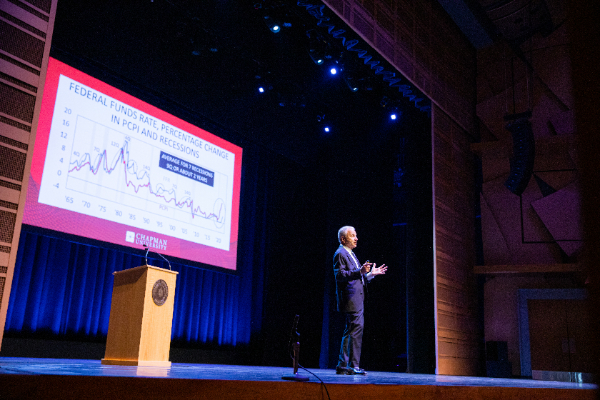 The annual forecast has since become a nationally respected indicator known for its accuracy, but at the time Doti just wanted to “make the class more interesting” by working with students to forecast how the Orange County economy would perform.

“No other forecaster that we knew of was doing that,” says Doti, who served as president of Chapman from 1991 to 2016 before returning to the classroom in his current role as president emeritus. “We had developed an econometric model to forecast Orange County… There were state models and national models but no models for county-wide areas.”

When Doti presents his 45th version of the forecast on Dec. 13 at 3 p.m., the content will resemble his first forecast in at least two ways.

In 1977, he and his students forecasted home prices and job growth for the next year – trends that remain 45 years later. Around that same time, Doti also gave an economic talk to some members of Chapman’s Board of Trustees, including Ambassador George Argyros ’59.

“George and I started talking about it,” says Doti, Ph.D. “And I pointed out how our forecast was different from UCLA’s. He said, ‘Why don’t you present that to a wider set of people in Orange County?’ George countered, and I said, ‘Fine, we’ll put it together and I’ll be there to present.’”

Chapman’s forecast has been No. 1 in accurately predicting real gross domestic product (GDP) from 2004 to 2021.

Doti and his students sent out invitations to Chapman’s first forecast in 1978. It was held at Fluor Corporation in Aliso Viejo.

“We had a folder, and we had the mimeographed forecast inside it,” Doti says.

Eventually, Doti and Chapman’s A. Gary Anderson Center for Economic Research began measuring Chapman’s forecast accuracy against the forecasts of 25 other agencies that measure the same things. Doti’s rankings, which go back to 2004 and are published in the center’s Economic & Business Review, show that Chapman’s forecast has been No. 1 in accurately predicting real gross domestic product (GDP) from 2004 to 2021. Other forecasters – including names like Goldman Sachs, Morgan Stanley and Credit Suisse – all participate in the industry-standard Blue Chip economic survey.

Those who aren’t economically savvy may wonder why real GDP is important.

“It’s the blood pressure for the economy,” Doti says. “It’s a measure of total spending in an economy. It’s consumer spending, investment spending, government spending and exports minus imports.”

Doti believes Chapman’s forecast has been consistently accurate because he, his colleagues and students keep updating the formula, which many models fail to do because it’s so time-consuming, Doti says.

Another unique thing about his model and one reason for its track record of accuracy is its monetarist underpinnings, he says. Monetarist theory holds that money supply is key to the economy’s performance.

Doti didn’t reveal all his cards before heading into the 45th forecast on Dec. 13, but he did say that he and his colleagues will forecast a recession in 2023 and look at whether their projections for the midterm elections were on the mark.

At the end of the day, Doti says he hopes that those who attend, including business owners and chief financial officers, will leave the forecast with confidence in its accuracy.

“Hopefully they can take what we’re saying as a guide to better plan the next year’s budget and strategies in terms of hiring, their strategic plans and growth for the year,” he says. 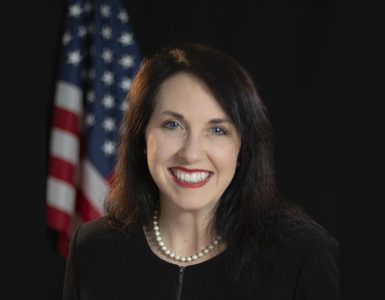