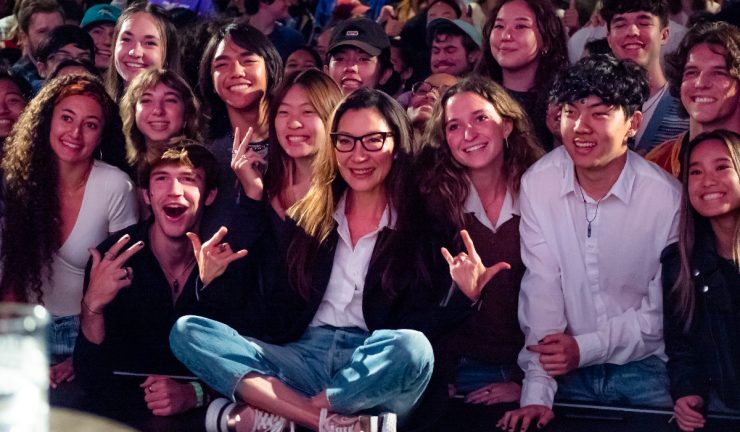 Acclaimed actor Michelle Yeoh ("Everything Everywhere All at Once") is joined by Chapman University students after her master class at Dodge College.
Arts & Film

A difference-making Career Center, immersive master classes with a who’s who of industry leaders, and a collaborative culture bolstered by diverse representation are among the reasons cited by The Wrap magazine in naming Chapman University the No. 4 film school in the nation.

The ranking, announced Oct. 31 in The Wrap’s annual  “Top 50 Film Schools” issue, solidifies Chapman’s position among the nation’s highest-performing film schools. It’s Chapman’s third year in a row at No. 4 – a position it also holds in The Hollywood Reporter national rankings.

“I couldn’t be happier about this,” said Stephen Galloway, dean of Chapman’s Dodge College of Film and Media Arts. “It’s an amazing achievement for a film school this young and a testament to all the work our faculty, staff and students do so brilliantly.”

Noting that “Chapman has been climbing the rankings in recent years,” The Wrap praised this year’s launch of the Dodge College Career Center, under the leadership of former CAA agent Joe Rosenberg,  producer Susan Landau Finch and others.

Reflecting its next-level commitment to alumni and student success, the center this fall began hosting a series of free three-hour workshops for alumni and students on subjects such as “How to Build a Franchise, Fast and Furiously,” taught by “Fast and Furious” producer Neal Moritz, and “Origin Stories: Character Creation for Animation,” with Stephen Silver (“Kim Possible,” “Cloudy With a Chance of Meatballs”).

The Wrap also lauded Dodge for its “top-notch” Master Class Series, which features speakers like Netflix CEO Ted Sarandos and acclaimed actor Michelle Yeoh (“Everything Everywhere All at Once,” “Crazy Rich Asians”).

Successful Chapman film alumni noted by The Wrap include Parker Finn (MFA ‘11), director of the 2022 horror hit “Smile,” which broke the $100 million barrier in just two weeks of release.

“The place has a reputation for making students happy, and it’s also becoming increasingly diverse,” The Wrap said. “Chapman recently hired 25 full- and part-time professors, the vast majority being people of color.”