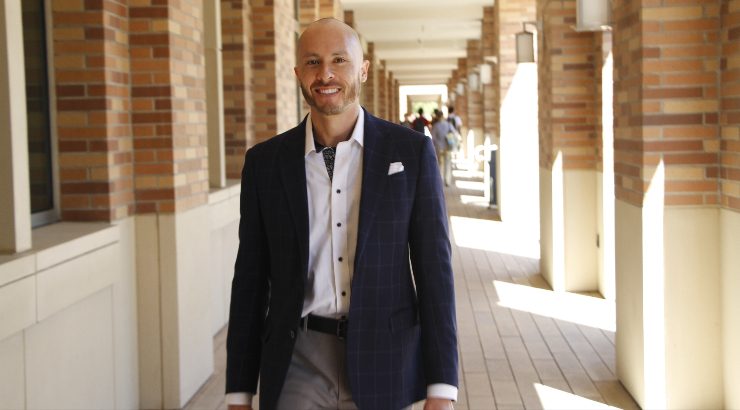 Breakthrough Research Offers Game-Changing Potential for Global Food Security “We can now predict 100% of food crashes and recoveries three to six months ahead of time. This is going to save lives,” says Chapman University Presidential Fellow Joshua B. Fisher, co-author of a paper published Sept. 29.

“No one has done this before – let’s check it out.” That’s how Chapman University Presidential Fellow Joshua B. Fisher describes the inspiration for many of his research projects, reflecting a process that has helped the ecosystem scientist become one of the most cited researchers in the world.

Now his latest unique exploratory project has yielded results Fisher says “could be a game-changer for global food security.”

In a paper published Sept. 29 in the highly respected journal Nature Sustainability, Fisher and three other investigators detail how their breakthrough research model predicted every global food security crisis within record at least three months in advance. What’s more, they accurately predicted the length and magnitude of each food crisis.

Going forward, the scientific advance may allow nations, the UN and humanitarian aid organizations to more efficiently direct resources to areas of drought and famine before those regions tip into full-blown crisis.

“Do you know what this means?” Fisher recalls saying to his former student and lead author Krishna Krishnamurthy at the moment the two realized their model had achieved its predictive potential. “We can now predict 100% of food crashes and recoveries three to six months ahead of time. This is going to save lives.”

Existing predictive systems fail to anticipate many crises, resulting in loss of lives and resources, the researchers said. Droughts are the source of two-thirds of those misses.

The researchers’ model is called SMART, for Soil Moisture Auto-Regressive Threshold. They achieved their key breakthrough by applying a tool of climate change science called Tipping Point Theory to clarify satellite data that measures the moisture content of soil. Other factors are represented in the model as well, including the price of grain, but they are ancillary contributors, Fisher said.

“The project really took off when we found that Tipping Point Theory can be applied to food security,” said Fisher, who, in addition to Krishnamurthy, is joined by Richard J. Choularton and Peter M. Kareiva as co-authors on the paper.

Tipping Point Theory is used to identify when dynamic systems experience incremental change that tips them into another state.

“It’s usually applied to really big climatic things. Like that the Sahara Desert once was all vegetated and now it’s not, or there were huge amounts of Arctic ice and now there aren’t,” said Fisher, a Presidential Fellow of Ecosystem Science in Schmid College of Science and Technology. “Except in this case, we’re able to predict a recovery, which won’t be happening in the Sahara.”

The other key component of the model is data from a NASA satellite mission called Soil Moisture Active Passive (SMAP), which has been providing soil moisture information since 2015. Food security crises identified by SMAP and plotted on the team’s research dashboard range from Guatemala to Ethiopia, Cambodia to Mozambique.

“We analyzed drought-induced food crises globally in the SMAP record – about five per year,” the researchers say in their paper, titled “Anticipating Drought-Related Food Security Changes.”

“The change in soil moisture autocorrelation … signaled an accurate food security transition for all cases studied, including lead time of up to three to six months for every case. The SMART trigger anticipates the timing of the transition and the magnitude of the food security change among small to large transitions, both into and out of crises.”

Reliable early-warning data are a driver of funding for humanitarian response to food security crises, said Krishnamurthy, who works for the UN World Food Programme as an anticipatory action and planning coordinator.

“Donors don’t always want to invest in a setting of uncertainty,” he said. “But if we can show that we’re getting really high levels of accuracy in our model, that will improve the confidence in the data and in the recommendation to act. Investing in early action and not just after the fact is critical.”

It takes about four to eight weeks to mount an emergency response to a food security crisis, Krishnamurthy said. So the chance to prepare for a famine three to six months in advance rather than reacting as many as eight weeks after systems have tipped into crisis is an exciting prospect, the researchers said.

Since their paper was published, they have received outreach from a number of actors who support humanitarian interventions, including the World Bank, “which is quite encouraging,” Fisher said.

One next step for the food security predictive model will be finding a way to more effectively account for the influence of conflict and regime change in a region.

“Our model doesn’t do a good job of predicting wars – at least not yet,” Fisher said.

It’s no surprise that there have been many ups and downs during the five-year history of the project, which began when Fisher was a scientist at NASA Jet Propulsion Laboratory and Krishnamurthy was his doctoral student. They continued their investigations from when both were at Oxford University, and the project has now reached new heights since Fisher joined Chapman in 2021.

The chance to mentor creative students throughout novel research explorations is a key factor that attracted Fisher to Chapman and its teacher-scholar model.

“Results like these drive you,” said Fisher, who ranks in the top 1% of scholars for his citations, according to scientific research service Clarivate. That puts him on a list with 24 Nobel laureates.

“When you get results that give you insight into how the world works, it’s such a rush,” he added. “Moments like this keep everything moving forward.”