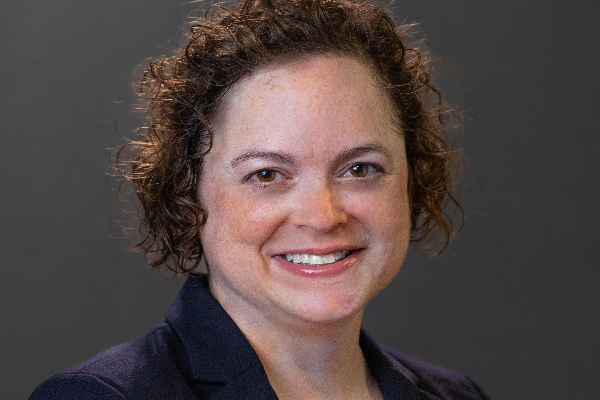 Andrea Siegel Becomes First Full-Time Director of Jewish Life Siegel, who has a doctorate in Hebrew literature, wants to make Jewish civilization welcoming for all.

Andrea Siegel sees herself as a translator – for reasons beyond her doctorate in Hebrew literature.

“Different Jews have different ways of connecting to our traditions and civilization,” says Siegel, who started in July as Chapman University’s first full-time director of Jewish Life. “And so part of my role is to help them translate for each other.”

Translational work that increases connections is a hallmark of Siegel’s experience. She brings a background in academia, nonprofit work and counseling to Chapman, where Hillel and Chabad student groups are active and 8% of undergraduates identify as Jewish.

Siegel was a clinical resident in spirituality and psychotherapy at a mental health center for underserved people in Appalachia, and she worked on interfaith orphan care issues in West Africa. Before that, she directed Jewish global citizenship education strategy for young adults at the humanitarian organization JDC, and she taught Jewish Studies at multiple universities.

A major reason she came to Chapman is to help the university nurture its connections with Southern California’s abundant Jewish resources. She also sees Chapman’s Fish Interfaith Center as an exceptional source of connection.

“There are only a handful of universities in the country that have an interfaith space like this,” she says.

With Fish as a hub of outreach, Siegel wants to expand “welcoming spaces” on campus.

“Jewish identities are so diverse, like whom you love and how you practice or observe. There are so many opportunities to get involved with and create Jewish responses to needs – where everyone is welcome to join regardless of your identity,” she says.

Siegel also looks forward to facilitating respectful debates and questioning conversations in the spirit of “makhloket l’shem shamayim” – Hebrew for “argument for the sake of heaven.”

“The idea is that you can have a debate and when you do so, from a position of deep listening and acceptance of the fact that we’re both created in the image of God, then you can differ in opinions and in that difference both become elevated,” she says. “We may not be able to find a common answer, but the fact that we’re sitting together and talking about this is of itself sacred.”

Siegel notes that it’s up to each new generation to find and amplify voices from the Jewish tradition.

“That’s why it’s really important to me, whether I’m talking with students, faculty, staff, alumni or visitors, to say, ‘Let’s bring in your voice and let’s find what can resonate,’” she says.

‘To Serve, Honor and Respect People of All Faiths’

Siegel first found her voice and connected with her faith traditions growing up in a Jewish household in the Washington, D.C., area. Her grandfather was in the Navy, where his family’s Jewish heritage was respected, Siegel says.

“That’s always touched me because later in my work as a chaplain, just being trained to serve, honor and respect people of all faiths and to see that as part of the American ideal is really important to me,” she says.

Siegel also grew up knowing the importance of social justice and civic involvement. She says her commitment to justice is encapsulated in the Hebrew phrase “tikkun olam” – “to repair the world.”

“It basically means partnering with God to make the world a better place. And that sense of active engagement in the world was instilled in me from a very young age,” she says.

Siegel brings that same commitment to Chapman, saying that she will always be thinking of ways to strengthen the Jewish community as well as ways that she can be a resource for all community members.