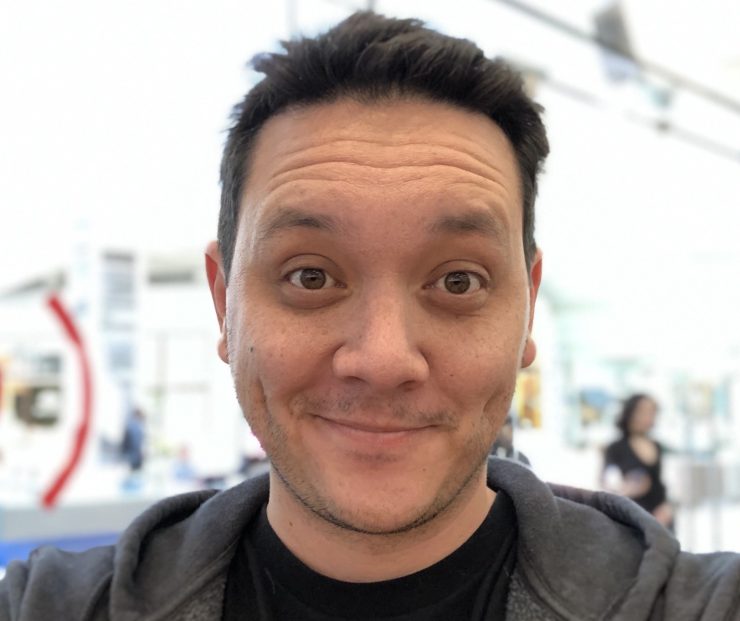 It’s the kind of story that usually only happens in the movies.

Adam Imada ’06, who earned his film studies degree at Chapman University, started his career 15 years ago in the mail room at Sony Pictures Entertainment. Today, he is the executive director of production and post solutions.

“It’s been a very interesting ride,” says Adam. “I started in the sound shipping department then moved to inventory, billing, junior engineer and then management in the span of a two-year period, so it was a steep learning curve.”

Adam manages a department responsible for deploying and supporting picture editorial systems for movie and television production – that’s the hardware and software that picture editors use to assemble a movie in post-production. His department also oversees production sound on the Culver City lot.

During his tenure, he has supported over 400 productions for Sony Pictures Motion Picture group, which includes Columbia Pictures, Screen Gems and Sony Pictures Television, with such theatrical hits as “Spider-Man: No Way Home” and “Bullet Train,” and TV shows such as “The Blacklist,” “The Good Doctor,” and “The Boys.”

Adam is married to Chapman alumna Jennifer Graham Imada ’09, who is a television writer and producer. He says, “Outside of work, I’m just a run-of-the-mill husband and dad. I’m trying to teach my 3-year-old daughter how to play Mario Kart and my son is one year old and just started walking, so it’s a lot of high-stakes boredom. My wife  has been joking around about me being addicted to burritos but I think the jokes are fading to genuine concern after realizing that most of the staff at our local Chipotle recognize me and no longer need to ask me what I want.”

We asked him about his time at Chapman and how it influenced his career.

Both professors Michael Kowalski and Harry Cheney had the most memorable impact while attending Chapman. I recall enjoying their classes and they both approached film and TV with such positive attitudes. I also learned a lot in their classes, which lead to my interest in working in sound.

While there isn’t a specific moment, I did enjoy the first couple of months of my freshman year. I wish I would have done more things outside of my comfort zone, if I could live it again. There’s something kind of magical when you realize you are on your own with a group of people in a similar boat. For me, it was the right mix of excitement, freedom, fear and naïveté.

What do you wish you knew at the time of your graduation that you know now? What advice can you give to the students and/or recent graduates of today?

I can only speak on personal experience because everyone has a different path and goals. Looking back, I wish I wasn’t so narrow in my focus. If I could do it over again, I would have enrolled in classes totally unrelated to what my end goal was. I think it is important to immerse yourself in areas that can be counterintuitive because I found that it helped me develop more well-rounded viewpoints and introduced me to groups of people I wouldn’t have met otherwise.

I like to think I learned a lot in class. I think what was equally important were the people and relationships I developed while there. I know that without those relationships there is no way I would be where I am today.

Were there any major societal issues in our country/world that you recognized or faced as a young college student?

I feel fortunate. I don’t recall many societal challenges while I was a college student. Either that, or I’m just remembering the past with rose-colored glasses.