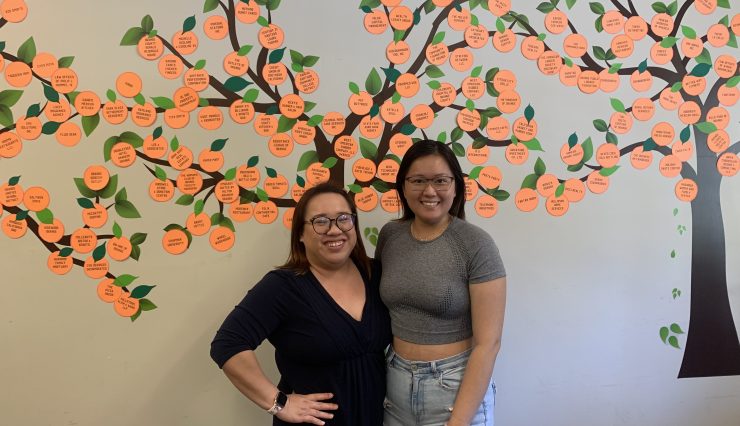 Joey Lin ’23 Works at Orange Chamber of Commerce and Creates the LEO Initiative Fostering the next leaders of the city of Orange and the world.

Joey Lin ’23, a business administration major with an emphasis in marketing, discovered an array of opportunities for herself and other college students working at the Orange Chamber of Commerce. “I have experience with graphic design, website development and social media, and my role was shaped to support the Chamber in those areas. For over a year now, I have held the position of Media and Marketing Coordinator,” says Lin.

At the chamber, Lin supports graphic design, media production, weekly newsletters and  various other tasks. During the recent Orange May Parade she was given the opportunity to design parade banners and merchandise. “Seeing the designs I’ve worked on used in such a beautiful celebration was truly an honor,” Lin states.

After a conversation with her supervisor Connie Chan, Lin realized that she lacked knowledge on certain life skills – such as filing for taxes or submitting a 401k. She was  eager to create something that could help people master these valuable skills and help her learn from working at the Chamber. Thus, the Leaders & Entrepreneurs of Orange (LEO) Initiative was born with the help of James Gerard from Chapman University and Christine Mantyla from South Coast College.

The LEO Initiative gives Chapman and other neighboring college students an opportunity to learn more skills for life after graduation. When working on the LEO Initiative, Lin and Chan focused on catering towards the audience. Their discussions centered around what students would want to learn that isn’t taught in school. “As a student, I was at the forefront of this discussion. We wanted a program for students, by a student, and while there were a multitude of topics to choose from, we also wanted students to gain real experience,” says Lin. This past semester, Lin hosted three virtual workshops that focused on resume building and more. Students who attended all three workshops received a certificate of completion and a letter of recommendation.

“In the future we want it to be a whole semester long, including more volunteer hours and mixers that include discussing topics such as diversity, equity inclusion and more. We would also like to foster internships by pairing students with business leaders in the area.”

Working on LEO has been a fulfilling experience for Lin. “Seeing it turn from an idea to a tangible event has been surreal. We’d spent over a year talking about this project and while COVID put a bit of a dent in our progress, we were still able to host virtual sessions. I am so excited to see where hosting in person will take us in the following semesters.”

While studying at Chapman University, Lin has been able to work towards a more tangible goal. “I always knew that I would be working throughout my entire undergraduate career. However, I did not expect to come across such a meaningful position. To be able to work on such amazing projects has been a credit to my professional and personal development. I could not be more grateful to work at the Orange Chamber of Commerce,” Lin says. In the future, she hopes to start a career in digital marketing that supports diversity and empowering women.

You can learn more about the Orange Chamber of Commerce and the LEO Initiative on their website.