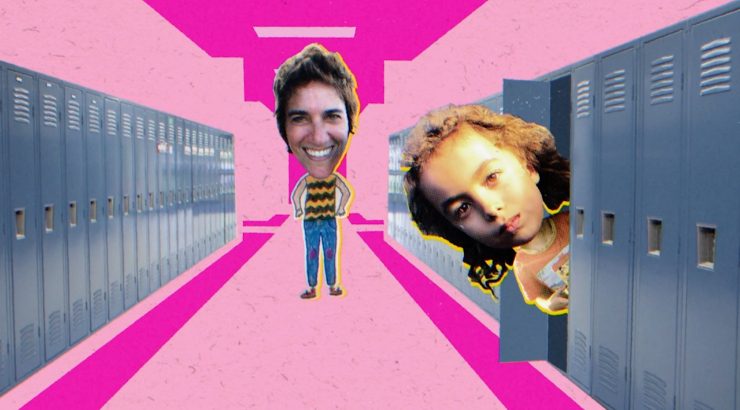 Chapman Professor Sally Rubin takes on a clip-art persona in her funny animated film "Mama Has a Mustache."
Arts & Film

Chapman Filmmaker Sally Rubin Finds That Kids Say the Most Insightful Things About Family and Gender Identity The documentarian’s vision takes flight as a major streaming service picks up “Mama Has a Mustache,” with added plans for a new series featuring young voices.

Documentarian Sally Rubin admits that she’s never been good at picking titles for her films. But this time, a great idea came straight from the hip, which is where she was carrying her then-2-year-old daughter, Millie.

“One day she laughed and said, ‘Ha, ha, Mama has a mustache,’” recalls Rubin, Chapman University professor and acclaimed director of feature-length documentaries such as “Hillbilly” and “Deep Down.” “I remember thinking, ‘Oh, I have to make a movie to fit that title.’”

“Mama Has a Mustache: Kids Talk Gender” is a lovingly quirky 10-minute documentary featuring audio interviews with a diverse group of young children. In their own charming words, the youngsters reflect on identity and family outside the traditional gender binary.

The young voices combine with animated clip art and mixed media “to explore and uncover this exciting new frontier – with lightness, humor, childlike openness and play,” as Rubin says in her director’s statement for the film.

It’s particularly exciting for Rubin that the conversations are just getting started. Her film has been picked up by a major streaming service, which for contract reasons she can’t name yet. But she can share that the media company has plans for an additional series of short films in which Rubin interviews youngsters about race, religion, bullying and other subjects.

Rubin was inspired to make “Mama Has a Mustache” “as someone who identifies as nonbinary but who decided to be pregnant and have a kid,” she says. “I wanted to look at this new gender frontier, especially as I’ve been meeting and working with Chapman students who more and more are identifying not just as transgender but as nonbinary.”

Rubin has long involved her Dodge College of Film and Media Arts students in her process by showing them rough cuts and inviting their critique. This cycle, she compared notes with students as fellow filmmakers – “as they were working on their cuts, I was working on mine,” she says.

“I think it’s nice for students in any discipline to have a professor who is actively creating new work and is in the trenches with them.”

The reception for her latest film, by her students and the film festival-going public, “has been way better than I could have imagined,” Rubin says. “Mama” has screened at more than 25 festivals, from Outfest to the Oscar-qualifying New York International Children’s Film Festival to the San Francisco International Film Festival and, most recently, MountainFilm in Telluride, Colo. 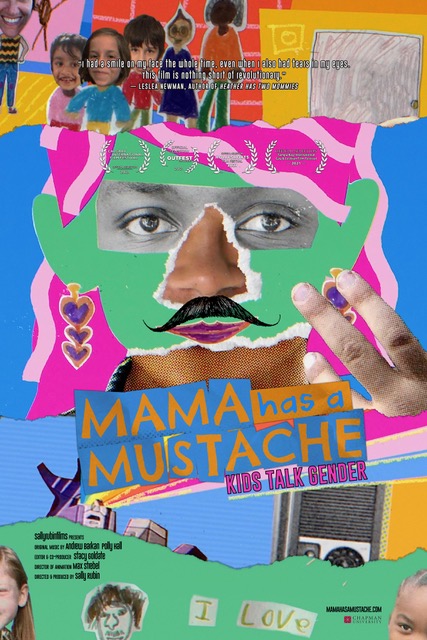 Observations Are “Honest, Hilarious and Always Straight From the Heart”

IndieWire called “Mama” one of 10 must-see films shown at Outfest. Reviewer Jude Dry calls the children’s observations about growing up with trans and gender-nonconforming parents “honest, hilarious and always straight from the heart.”

Of Rubin, Dry writes that “Mama Has a Mustache” “marks a more playful but just as vital side to Rubin’s work.”

After conducting more than 40 interviews for her feature-length 2018 documentary “Hillbilly,” which to a great extent traces the origins of the current rural-urban divide in America, Rubin was ready to show her playful side.

“After ‘Hillbilly,’ I definitely wanted to offer the world something that’s fun and playful but still gets people thinking,” she says. “It was really fun to dive into animation without knowing anything about it.”

Now the impact of “Mama Has a Mustache” has a chance to grow even more.

Thanks to Chapman scholarly research and outreach grants, as well as support from the New England Foundation for Psychoanalysis, the Perspective Fund, Chicken and Egg, and private donors, Rubin and her team have created a teaching toolkit and discussion guide for use in classrooms and at conferences on education, child development, psychology and gender studies.

As “Mama Has a Mustache” sparks a dialogue about gender identity, Rubin acknowledges that other forces – in legislatures, on social media and elsewhere – are pushing back against a nonbinary understanding of gender.

Bring on that conversation, too, Rubin says.

“Controversy is great,” the filmmaker adds. “Not everyone has to feel like I do, or like the kids in the movie do. I understand that people have very strong opinions about how kids should be raised. I just want ‘Mama Has a Mustache’ to be out there as an option for parents and school systems to decide.”