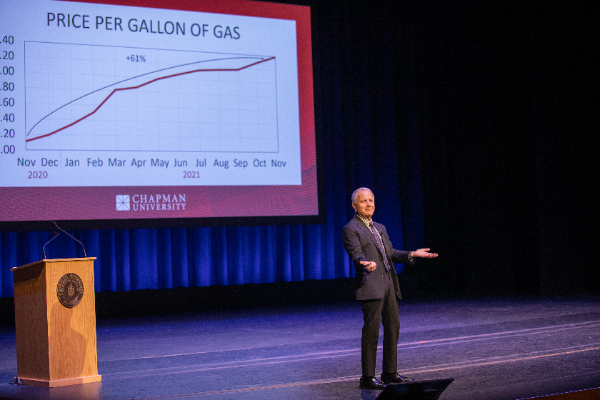 The midterm elections, likelihood of recession and housing market are among the topics economist Jim Doti will discuss at the Economic Forecast Update June 23.
University News

Jim Doti thinks Chapman University’s Economic Forecast Update may be “the most important and useful in the 45-year history of the event.”

Doti, an economist and Chapman’s president emeritus, is planning to speak about the likelihood of a recession and “shocks to the economy” that are affecting things like home prices. The Forecast Update – scheduled 3 p.m. PDT Thursday, June 23 at the Musco Center for Performing Arts – will add the feature of Doti’s forecast of November’s midterm elections.

The Forecast, presented annually in December, gives insights into the economies of Orange County, California and the U.S. The Forecast Update in June revisits the data shared in December and Chapman’s econometric model is updated accordingly.

In 2020, the forecasts went virtual and reached nearly 10,000 people. This year, people can attend the June 23 Forecast Update in person or online.

All proceeds support scholarships. Edwards Lifesciences is the title sponsor.