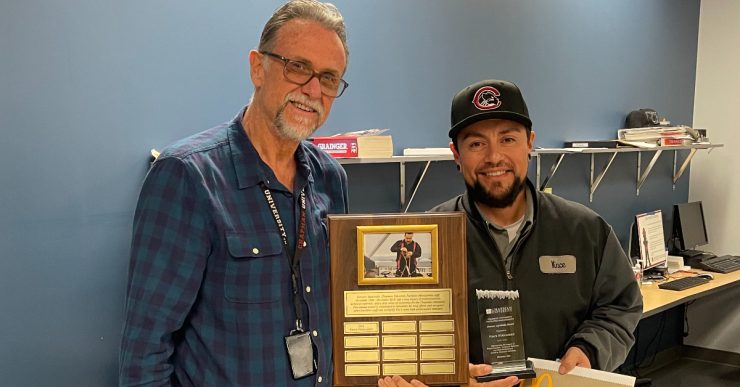 In May 2020, at the height of the COVID-19 pandemic, the work of HVAC technician Vince Fernandez took on a whole new meaning. His manager summoned him to a meeting where he issued him a single order: “Get MERV 13 air filters and UV lights right now, and get them everywhere on campus.”

Fernandez, per his usual calm and confident demeanor, didn’t ask questions. He dropped everything, and in record time he had secured and installed the highly coveted MERV13 filters and UV lights throughout the entire campus.

“While everybody else was still trying to figure out what was going on with the pandemic, Chapman had MERV 13 air filtration and UV lights installed campus wide. I attribute that largely to Vince,” says Fernandez’s supervisor, building controls manager Evan Spotswood.

Fernandez’s relentlessness in helping to secure the vital equipment needed to keep the campus community safe during the pandemic is just one example of why he was named the first recipient of Chapman’s Facilities Management Doroteo Sepulveda Award.

Chapman’s Facilities Management team established the award in 2021 to honor the legacy of Sepulveda, a 35-year Chapman employee who worked his way up from set-up crew member to electrician, and whose service to the university is hailed as representing the highest standard of work ethic and integrity. “Teo,” as he was often referred to by colleagues and friends, passed away in 2019 after a battle with brain cancer. The new award builds on his legacy by honoring Chapman facilities staff members who embody Sepulveda’s values-centered spirit, integrity and work ethic.

“Teo represented the university in the highest level that you possibly could,” says Rick Turner, vice president of Facilities Management, Property Management and University Services. “By establishing this award, we want to honor Teo and also acknowledge those who demonstrate Teo’s same integrity, work ethic and service.”

“If you want to find someone who checks every single one of those boxes, it’s Vince,” says Spotswood. “Like Teo, he takes ownership of his work. Chapman to him is not just a place to work. It’s a place he owns and takes pride in.”

“I’m very thankful to be recognized for my work,” says Fernandez. “The honor and privilege that is tied to this award is very gratifying, but the real prize is to be seen as someone who has a similar work ethic and character as Teo. To be recognized as someone who is living up to the high standards that Teo left behind for us to follow is truly humbling.”