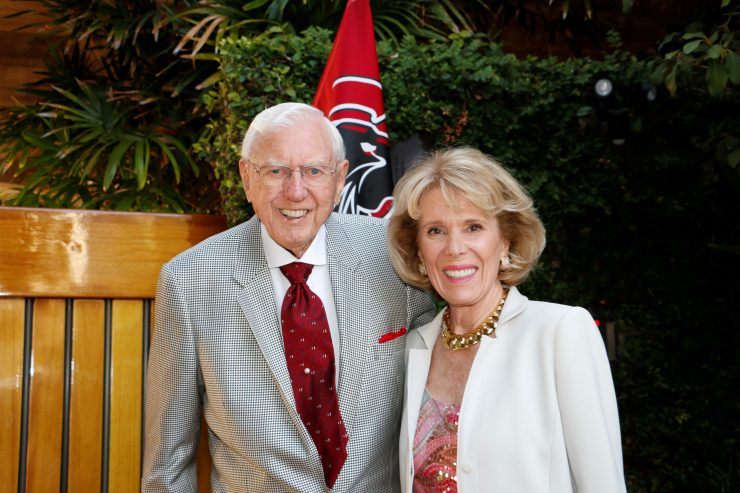 Trustee Harry S. Rinker, a titan of the real estate industry and generous philanthropist who helped drive the growth of Chapman University, died Aug. 22. He was 100.

“Harry was an individual of incomparable integrity and a catalyst for tremendous change in Southern California. Honesty, generosity and community were his core principles,” said Chapman University President Daniele C. Struppa.

Rinker’s philanthropy reflected his passion for education and helping others realize the California dream. In 2013, he and his wife Diane made a $15 million gift to name the Harry and Diane Rinker Health Science Campus in Irvine, significantly addressing the critical need for a new generation of health care professionals.

“His visionary gift built a foundation for Chapman to help and lead during unprecedented times. I’m so grateful he could see his generosity in transforming Southern California into a hotbed for the sciences, especially health care, bear fruit,” Struppa said.

He served Chapman for decades, becoming a member of the Board of Trustees in 1976 and provided his service and leadership for more than four decades, impacting scholarships, annual events and numerous other critical areas of the university.

A boundless enthusiasm for Chapman was among his hallmark traits, said Sheryl Bourgeois, Ph.D., executive vice president and chief advancement officer at Chapman.

“Harry was such a gracious person and so devoted to Chapman. You would have thought he was an alumnus,” Bourgeois said. “Any time something good was written about the university, he would send a note of congratulations. And his notes would always end with an encouraging phrase, such as, ‘Thank you for all the wonderful things that you are doing for Chapman.’ He knew just how to make someone feel appreciated and proud of their efforts. He was a great man, and I will miss him.”

Indeed, earlier this year Rinker marked his 100th birthday in a letter to friends to commemorate the occasion, remarking on his and Diane’s long friendship with Chapman.

“I have thoroughly enjoyed watching Chapman grow … to a nationally ranked university that has nearly 10,000 undergrad and graduate students, features one of the most beautiful campuses around, and is one of the finest and most respected institutions in this country,” he wrote. “Diane and I are honored to have been a part of this growth and even more honored to have a campus in Irvine named the Harry and Diane Rinker Health Science Campus.”