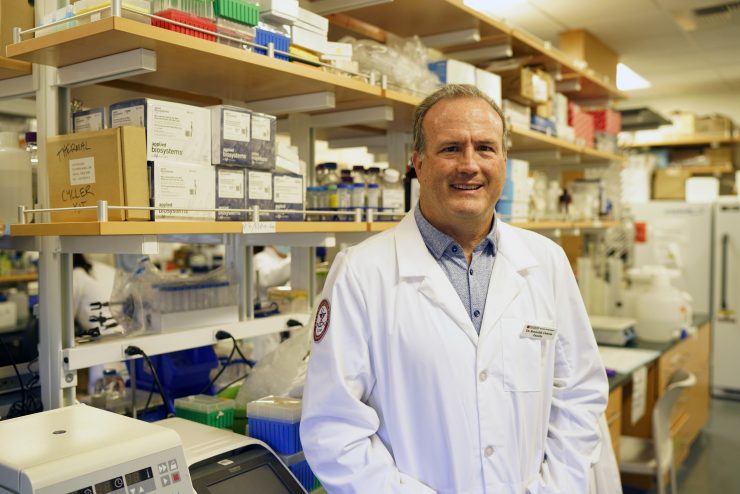 Aided by a grant from the National Institutes of Health, School of Pharmacy Professor Rennolds Ostrom seeks to learn more about the science behind treatments for asthma and COPD.
Fall 2021 Chapman Magazine

For years, physicians have prescribed fast-acting inhalers and other therapies to treat asthma and chronic obstructive pulmonary disease, or COPD. Once inhaled, treatments bind to receptors on the surface of airway cells and “tell” them to relax.

These drugs work pretty well for most people. Until they don’t.

Over time, the treatments lose their effectiveness and even worsen patients’ conditions. Finding solutions to that problem is the focus of a Chapman University School of Pharmacy professor who studies the inner workings of the cells at play in those ailments that together afflict more than 40 million Americans.

Funded by a grant from the National Institutes of Health, Rennolds Ostrom aims to learn more about the complex signaling mechanisms deep within cells that scientists suspect influence the dwindling efficacy and long-term harm of those medications.

“We need better drugs that open up airways and give people relief but don’t trigger these long- term effects,” says Ostrom, Ph.D.

This work builds on a program he developed at the University of Tennessee Health Science Center before bringing his research to Chapman. The element he studies is a signaling molecule called cyclic adenosine monophosphate, or cAMP. Specifically, he looks at how it works within the sub-compartments of cells. Understanding these functions will help scientists create new therapies for cardiovascular disease, asthma and other diseases.

Indeed, there is great potential for widespread application. Signaling systems utilizing cAMP exist in all human cells, stimulating myriad responses throughout the body – from appropriate ones like a burst of adrenaline in a fight-or-flight situation to less apparent reactions that can trigger disease or defeat medications. More knowledge about these mechanisms could offer insights into factors driving cell behavior in a multitude of diseases.

“Every cell in all organisms uses this signaling molecule,” Ostrom says. “In a fundamental way, what we are investigating could have applications across all cell biology.”

Scientists understood the basics of this molecule some 50 years ago, when they identified cAMP as an internal signaling molecule. Ostrom’s work dives deeper, aiming to learn how different proteins are altered by cAMP signaling within discrete areas inside the cell. The work is vital because the traditional strategy of drug design is to target a specific protein or receptor. But scientists need more targets.

“We need better drugs that open up airways and give people relief but don’t trigger these long-term effects.” – School of Pharmacy researcher Rennolds Ostrom, Ph.D.

“We’re running out of targets. We need to get down to the finer, nitty-gritty details. We need to target the compartments within a cell,” he says.

The technical compartments challenge is that those within compartments are too small to see. Nevertheless, Ostrom, who has published more than 70 peer-reviewed publications, review articles and book chapters as well as 80+ meeting abstracts about cAMP, says scientists know the compartments are there because of laboratory observations.

So what might those compartments be like? Ostrom says they are likely an assemblage of pre-arranged complexes of molecules. Or think of an office chock full of work cubicles, where the activity of one might trigger a reaction that affects everyone across the office, or might not because the cubicle walls contain the activity.

“Does disease happen because something goes wrong with these compartments? The bottom line is we don’t know yet,” he says. “Once we know the normal biochemistry of those compartments, then we can problem solve.”

In his Chapman lab and in collaboration with Drs. Robert Harvey (University of Nevada, Reno), Raymond Penn (Thomas Jefferson University) and Reynold Panettieri (Rutgers University), Ostrom is puzzling out those biological mysteries through experiments with human airway smooth muscle cells to see cAMP patterns in both diseased and healthy tissue.

He hopes to have new findings in publication later this year. 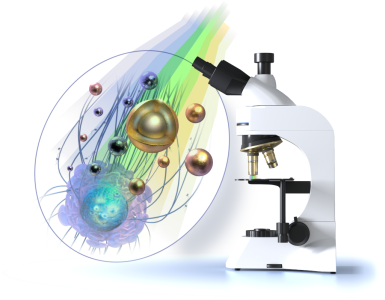 Qamar Alshammari (Ph.D. ’22) had her research on spectral imaging published in Nanoscale, a prestigious journal by the Royal Society of Chemistry, while still a doctoral candidate in Chapman University School of...