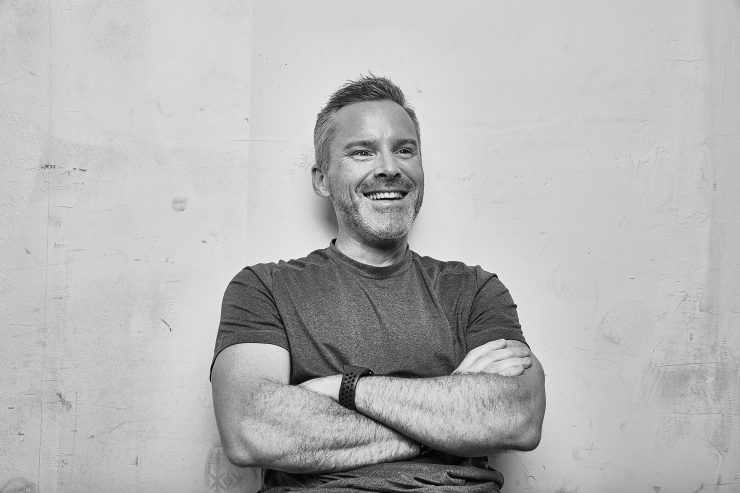 The Voice of Batman Is the Voice of Chapman From Cartoon Network to CU Commencement, Roger Craig Smith ’03 brings distinctive talents to a variety of projects.

What do Sonic the Hedgehog, Captain America and the announcer who welcomes you to Ernie Chapman Stadium all have in common? They are all the voice of Roger Craig Smith ’03, a voice actor and Chapman University alumnus who’s been featured in some of media’s most prominent properties over the last decade and a half.

A screenwriting major at Chapman’s Dodge College of Film and Media Arts, Smith was aiming for a career in stand-up comedy when he discovered a talent for making funny character voices. His first official voiceover job was decidedly “un-glamourous” — a training video for a medical device company in Cypress.

“They wanted a versatile guy who could just do a bunch of different character voices,” he says. “It was a perfect blend of all the things that I’ve done in life — performance in musical theatre as a kid, theatre arts in high school, stand-up comedy and education in screenwriting.”

Smith has made a career providing voice- overs for ads, movies, television and video games, giving voice to such prominent characters as Captain America, Batman and Kylo Ren. In 2013, he was the voice of the villain Ripslinger in Disney’s hit animated feature “Planes.” He is the longest- running voice actor of Sonic the Hedgehog — including in Disney’s “Wreck-it Ralph” movies — and he’s played more than 170 characters for the Emmy-winning Cartoon Network series “Regular Show.”

In the video game market, he is Ezio in “Assassin’s Creed,” Chris Redfield in “Resident Evil” and Mirage in “Apex Legends.” If cartoons or video games aren’t your thing, you may have heard Smith as the announcer on NBC’s “World of Dance,” TLC’s “Say Yes to the Dress” or the DIY Network series “Crashers.”

Still not sure where you might have heard his voice? Smith contributes to a wide variety of regional promotional campaigns and has been the voice of Ram Trucks for the last 10 years.

You can also hear Smith in a number of recent promotional videos for Chapman. For the last five years, he’s been creating voiceovers for the university’s marketing efforts, and he recorded the stadium announcements used during Commencement.

“Roger Craig Smith embodies the spirit of the Chapman Family,” says Heather Breen, the university’s video and photography manager. “Not only is he incredibly talented, but he is also generous and humble. I always look forward to working with him on projects.”

“I enjoy being connected to the university and still try to help out wherever I can,” says Smith, who has also helped out as a mock guest for broadcast journalism students. “It’s strange to go from being a student to being an alumnus of note because of something that you’ve done in the industry. I was more than happy to come back and help out in any way that I can. It’s always flattering and kind of surreal to be asked.”

What’s next for Smith? You’ll just have to keep your ears open.

“The worst part about my job is that anything that I know that is actually coming down the pipeline is stuff I can’t talk about,” he says.