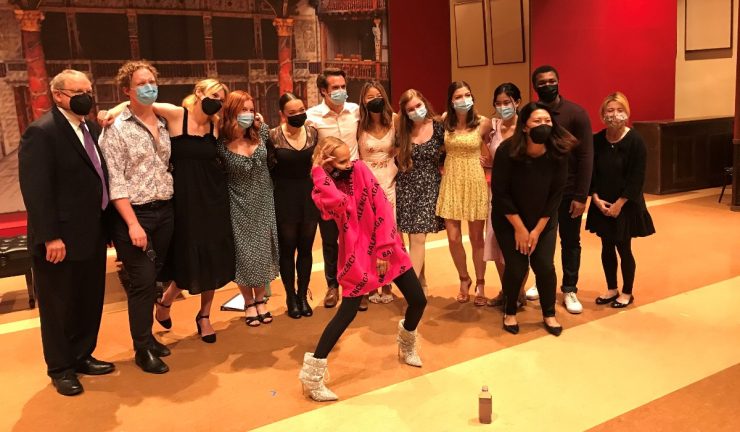 Kristin Chenoweth is an Emmy and Tony award winning actor and singer with a new Christmas album, a show-stopping part on Apple TV’s hit “Schmigadoon!” and a leading role in the upcoming STXfilms sports drama “National Champion.”

But on a recent afternoon at Chapman University, she was all teacher.

With her characteristic energy, wit and playful humor, Chenoweth spent more than two hours with vocal, dance and acting students from Chapman’s College of Performing Arts conducting a master class and sharing insights from a career that spans film, television, voiceover and Broadway. Within minutes, starstruck students were at ease and soaking up every word and bit of advice.

Celebrity Teacher for a Day

“We were all nervous, but once she came into the room, she’s so comfortable with herself she didn’t give off a vibe of intimidation,” said Evelyn Pham ’22, one of the students selected to perform during the master class.

On tour in Southern California, the actor-singer made time to visit campus at the invitation of her former professor at Oklahoma City University, Stephen Coker, DMA, now associate professor and director of choral activities in the College of Performing Arts. Chenoweth joked that she was the one who was most nervous of all.

“He’s still my professor,” she said in a stage whisper, nodding toward Coker.

But if students were expecting a chatty visit and perfunctory compliments for their performances, that notion quickly exited stage left. Wrapping up a brief Q&A, Chenoweth – who holds a master’s degree in opera performance – dug in for a roll-up-the-sleeves master class. She donned reading classes, turned to the roster and called students forward to perform their prepared pieces.

Most students sang musical theatre standards, including several Chenoweth had famously performed herself. Two performed monologues. Everyone earned praise, along with coaching, guidance and more than a few “let’s-hear-it-again” commands to get the character, song, movement or dialogue just right. Several times, she turned to the audience, applauding the faculty who had trained the students and developed their talents.

“I can’t tell you how much I love doing this, because I love talent,” she said.

As the afternoon wore on, the class ran over schedule. The final student on the list was an alternate performer, so cutting her number seemed likely. But Chenoweth wasn’t having it.

And that’s how Pham, a senior vocal performance major found herself winding up the class with a performance of “The Girl in 14G,” an ambitious number written for Chenoweth’s debut album and which features jazz and opera elements, including arias from “The Magic Flute” and “Swan Lake.”

Learning From a Pro

Pham glowed when Chenoweth praised her musicality and rose to the challenge when the singer coached her to put more movement into the performance to add a visual boost to the lyrical storytelling. Pham described it as an unforgettable experience.

“It was a once in a lifetime opportunity,” she said, adding that the song was special to her because she had first sung it in high school and found it to be transformational.

“It’s a big song and it really got me out of my shell and made me feel like I had something,” she said. “So it’s like coming full circle at the end of my time at Chapman, to be able to share it with the original singer herself. I’m so glad they decided to go overtime.”