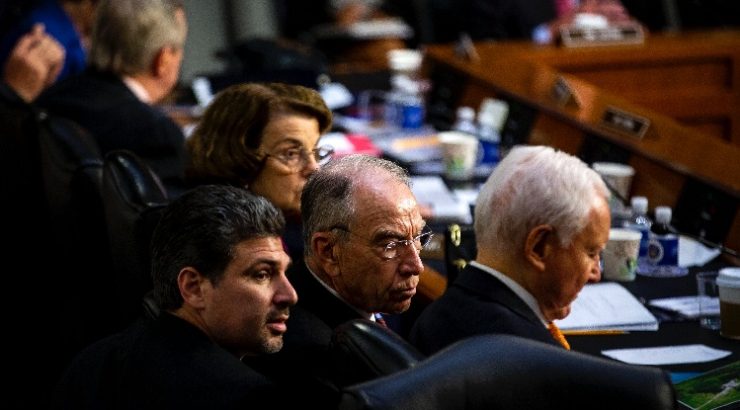 As a Fowler Law student and later as a fellow in Chapman’s Military and Veterans Law Institute and Legal Clinic, Joshua Flynn-Brown felt a growing “pull toward public policy,” he says.

Now Flynn-Brown ’07 (JD ’11) is in Washington, D.C., working for Sen. Chuck Grassley as his deputy chief investigative counsel on the Senate Judiciary Committee. The oversight role working for Sen. Grassley is “a perfect job for me,” he says, “because I have a passion for ensuring that the federal government is operating efficiently and isn’t abusing its authorities.”

Through oversight of the Department of Justice and its components, including the FBI, Flynn-Brown says he works to protect civil liberties.

“When it comes to investigative techniques and enforcement, the federal government has an awesome power,” he says. “We need to make sure that power is used properly for the American people.”

Flynn-Brown developed a passion for his work thanks to the mentorship of Kyndra Rotunda, JD, professor of military and international law and executive director of the Military and Veterans Law Institute at Chapman. As a Fowler School of Law student in the AMVETS Legal Clinic, Flynn-Brown represented clients and litigated cases, with Rotunda guiding the clinic team.

“By the time I graduated, I had real cases under my belt,” he says. “Every day I draw on those experiences and what Kyndra taught me.”

Clinic work is “where I cut my teeth as a lawyer,” Flynn-Brown adds. “We even started working on legislation with some Air Force officers who had been illegally terminated. All of that whet my appetite for moving to Washington.”

Rotunda says Flynn-Brown was a go-getter from his earliest days at the clinic, “and he never took his foot off the gas,” she adds. “I always knew he was going places.”

Flynn-Brown also excelled during his undergraduate experience as a standout on the Panther men’s basketball team. A three-point sharpshooter, Flynn-Brown was the Association of Division III Independents Player of the Year and Student Athlete of the Year as a senior. His 20.5 points per game still ranks as the highest scoring average in Chapman’s Division III history.

The rigors of his Fowler Law and Panther basketball experiences helped prepare him “to thrive on competitiveness,” Flynn-Brown says, “and, of course, Washington, D.C., is a very competitive place.”

Explore the Fowler School of Law legal clinics and the Military and Veterans Law Institute. To learn more about competitive, funded fellowships with the institute, contact Professor Kyndra Rotunda at krotunda@chapman.edu.