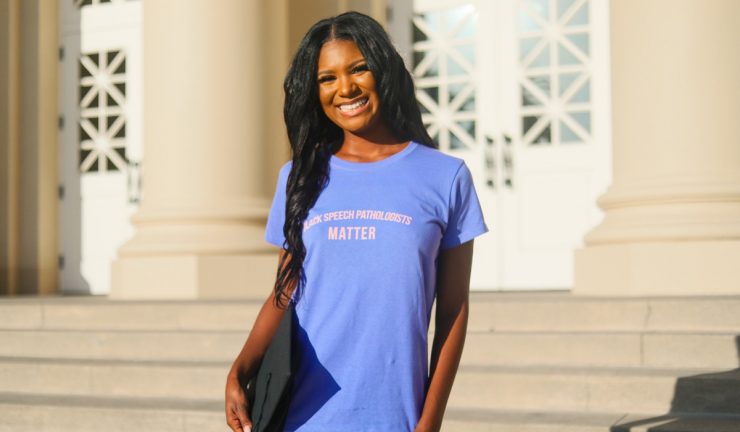 “I really wanted to help kids who looked like me or came from the same environment as me,” says speech language pathologist Kiera Johnson Jenkins (MS ’20).
Crean College

As a Black speech language pathologist, Kiera Johnson Jenkins is used to getting questions about African American English (AAE). But she considers such queries a good sign.

Jenkins is a new speech language pathologist in the Los Angeles Unified School District, excited to enter a field where people of color are sorely underrepresented. She chose the career, in part, to advocate for children who are sometimes misdiagnosed with speech disorders because they follow AAE dialectical pronunciation rules – for example, pronouncing the “th” on word endings as “f.”

Speaking Up for the Underserved

And as is typical with new graduates from Chapman’s Communication Sciences and Disorders program, she’s close with her classmates, the people with whom she worked and studied through demanding coursework and clinical rotations. They grew especially tight in the days following the death of George Floyd, as they struggled together to understand the impact Floyd’s brutal killing had on Jenkins, then one of their few Black students in the program.

Now, they stay in touch, offer support and share professional advice. So when they have one of those questions about dialect, Jenkins is happy to provide insights.

“I know that they’re all about diversity and being progressive in the field, and that’s important to me as a Black within the field — to know that people are working for equity and equality,” Jenkins says.

That’s just one way Jenkins is striving to make positive change in an area of education where children of color are often either underserved, or disserved because of cultural unawareness. The passion for her career sprang from her experience teaching at a preschool attached to a public elementary school in her Compton, California, neighborhood. There, the Spelman College alumna who graduated with a degree in sociology saw a two-pronged problem. Services were often either inadequate or misapplied.

“I really wanted to help kids who looked like me or came from the same environment as me,” she says.

She returned to school to earn a bachelor’s degree in communication disorders from Utah State, and for her graduate work she chose the Communication Sciences and Disorders program at Chapman’s Crean College of Health and Behavioral Sciences.

Crean College’s nationally recognized track record for preparing its students for state exams and post-graduate success impressed her. But she was especially smitten by the program’s cohort model, which places students together for the duration of their studies — in effect creating a community whose members are invested in each other’s success.

“We’re like a family and we got each other through it. When we were feeling down, there was always someone who could pick us up and encourage us, which was important because it’s not an easy program,” she says. “They’re awesome. We still lean on each other.”

That cohesiveness proved to be a surprising strength in the days following the killing of Floyd, a 46-year-old Black man who died after a police officer pinned him to the ground outside a Minneapolis convenience store.

The event devastated Jenkins, who was disappointed that no one around her spoke of it or the protests that swept across the nation. Frustrated and hurt, she emailed the department chair with her concerns.

That step produced a moment of awakening, says Mary Kennedy, professor and chair of the Department of Communication Sciences and Disorders. After a conversation with Jenkins, Kennedy, Ph.D., organized an online meeting of the entire cohort.

“It was a really good experience for all the other students to hear how Kiera felt. And they were able to show empathy and compassion toward her,” Kennedy says.

Then they broke into groups to discuss times when they had felt marginalized or scared, and to imagine that feeling magnified through the experience of lifelong racism. From there, the students also formed a book group to expand their understanding of white privilege.

“There was a lot of emotion that night,” Kennedy says. “It was just eye-opening for them.”

It also deepened the program’s curriculum, which includes a course in multicultural awareness. The course was recently moved from the second-year lineup to students’ first year, to bring that experience to the forefront earlier in their training, Kennedy says.

“Until you really know someone who’s outside your community, you don’t necessarily have the ability to put yourself in their shoes. That’s especially important for those of us who are in any kind of caring profession,” she says.

These days Jenkins is busy with the day-to-day work of a speech pathologist in one of the nation’s largest school districts. She serves three different schools, as well as an early-education center. Some of her most challenging students bring her the greatest joy, such as when she works with a nonverbal child with autism, helping them master enough sign language to convey their needs.

“That makes my heart sing,” she says.

She and her cohort share those stories, too. Because they know well the value of listening, learning and speaking from the heart.