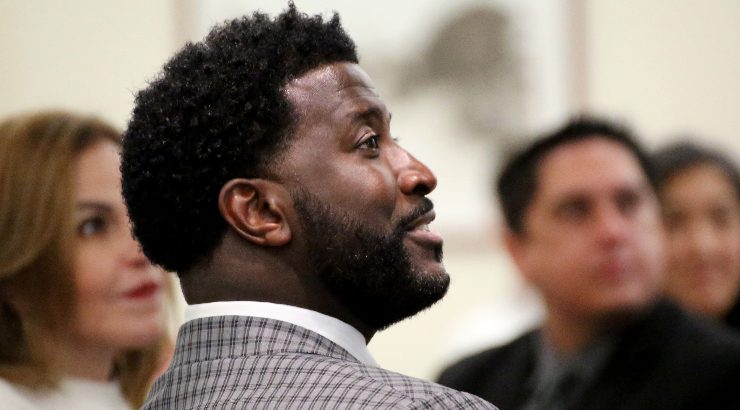 September is always special to Jimmie C. Gardner. In 2016, that was the month when charges leading to his wrongful conviction and a legal nightmare lasting nearly 30 years were finally dismissed.

This year the anniversary is especially extraordinary. Gardner, now a motivational speaker and advocate for prison reform and inmate rights, became a full-time student at Chapman University, his attendance made possible with a full-ride Presidential Scholarship.

“I had the opportunity to enroll and be a part of Chapman University and the Panthers. I jumped right in with five classes,” said Gardner, who is a communication studies major.

Like the vast majority of Chapman students, Gardner is attending remotely this semester, but his connection with the university began in January when he attended Fowler School of Law’s annual Law Review Symposium, where his wife the Honorable Leslie Abrams Gardner, U.S. District Court Judge for the Middle District of Georgia, was the keynote speaker.

“I just felt at home and loved,” he says. “I’ve had opportunities to go to other universities, but when the Chapman offer came, I didn’t hesitate.”

Gardner shared details of his tireless fight for justice as one of the special speakers in a Sept. 29 event co-sponsored by Fowler School of Law, the Black Law Students Association and Wilkinson College of Humanities, Arts, and Social Sciences. His talk is part of the law school’s Dialogue Series and Wilkinson’s semester-long initiative “Engaging the World: Leading the Conversation on the Significance of Race,” a multipart series of events and programming

“Engaging the World” explores social justice and other societal issues through a variety of programming, from films to an art exhibition. Among the events – all virtual – is a Nov. 2 panel discussion, “Working for Racial Justice and Human Rights,” that will include faculty member Ahmed Younis (Ph.D. ’16), former Principal Deputy Assistant Secretary of State and Deputy Special Envoy, U.S. Department of State.

Those themes have long galvanized Gardner, a former minor league baseball player who spent 27 years in prison for a crime he didn’t commit, wrongfully convicted on false evidence delivered by a corrupt forensic laboratory technician.

Since his release in 2016,  he has made public speaking about those topics an occupation and a passion.

“I just want to be in a position to help others grow and get through discomforts and disadvantaged situations in their lives. People hear my story and get hope and inspiration,” Gardner says.

“His story is extraordinary, and when he shared it to over 700 people through the first Chapman event, its impact was clear,” Takaragawa says. “Because of the dozens and dozens of audience questions and responses, which could not possibly be answered in the 90 minute frame, he offered to come back the following week just to answer questions.”

Fowler Dean Parlow shares that admiration. It’s one reason why he asked Gardner to be part of the university’s larger discussion of racial injustice in the wake of the George Floyd killing, including the diversity-focused fall season of the Chapman Dialogue Series.

“He’s one of the most special people I’ve ever met, and I’m thrilled he’s now part of the Chapman Family,” says Parlow. “His optimism, his faith, and his ability to overcome a stark and sobering reminder of how unjust our criminal justice system can be is a true inspiration. It shows that there’s more work to be done to create a more just system.”

Now, in these early days of the semester, Gardner, who attends Chapman as a Presidential Scholar, is focused on classes, building on his associates degrees in management and restaurant management as he completes a B.A. in communication studies. Having visited campus as a guest speaker prior to COVID-19 travel and gathering restrictions, he says Chapman felt like a natural fit.

“I just felt at home and loved,” he says. “I’ve had opportunities to go to other universities, but when the Chapman offer came, I didn’t hesitate.”

While he may be a new student, Gardner will be a teacher of sorts as well, as all students are when they enter a Chapman classroom, Takaragawa says.

“He helps people to understand what incarceration and the judicial system looks like from his perspective of having been wrongly incarcerated for over 25 years, and it’s not from bitterness, but from a genuine desire to help create change and justice,” she says. “I imagine that he will also equally be educating students in these classrooms.”

Tune In to the Rest of the Series

View the full schedule: “Engaging the World: Leading the Conversation on the Significance of Race.”