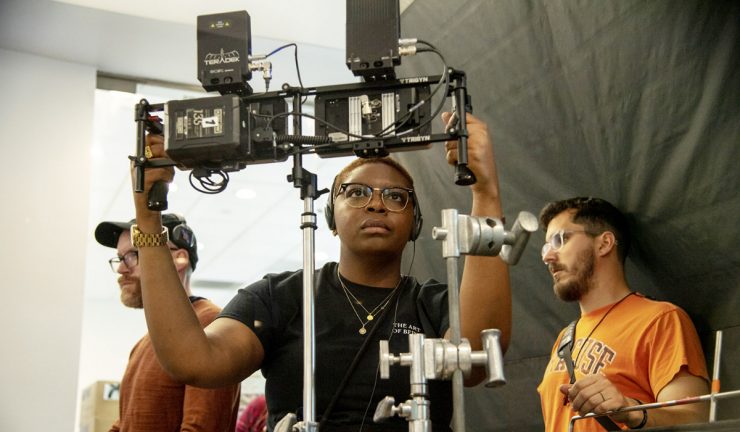 Chapman Alumna Could Make Emmy History With ‘A Black Lady Sketch Show’ Dime Davis would be the first Black woman to win in the directing category.

“Incredible” and “surreal” are two words Dime Davis (Class of  ’08) uses to describe her Emmy Award nomination. But beyond the excitement, the Chapman University alumna is also aware of the opportunity to make history.

If Davis wins the Emmy for directing HBO’s “A Black Lady Sketch Show” when the awards are announced on Sunday, Sept. 20, she will be the first Black woman to receive such a directing prize.

“We didn’t set out to be nominated, but we did set out to make something that we’d never seen before, something where we felt like we could fully express ourselves in this comedic way that’s typically not a space dominated by women or specifically Black women or women of color at all — so it was really cool,” Davis told National Public Radio.

In addition to directing all six episodes of what show creator Robin Thede calls “a cinematic narrative sketch series,” Davis is nominated as co-executive producer of the show.

“Dime just has such a cinematic eye that when I told her, OK, I want this to look like ‘The Bourne Identity,’ she’s like, got it,” Thede told NPR. “She’s gonna be one of the greats in her generation. I really believe that.”

“Dime’s just one of those people that’s just been so ready for this moment,” Simien said, adding that her opportunity is “a big deal.”