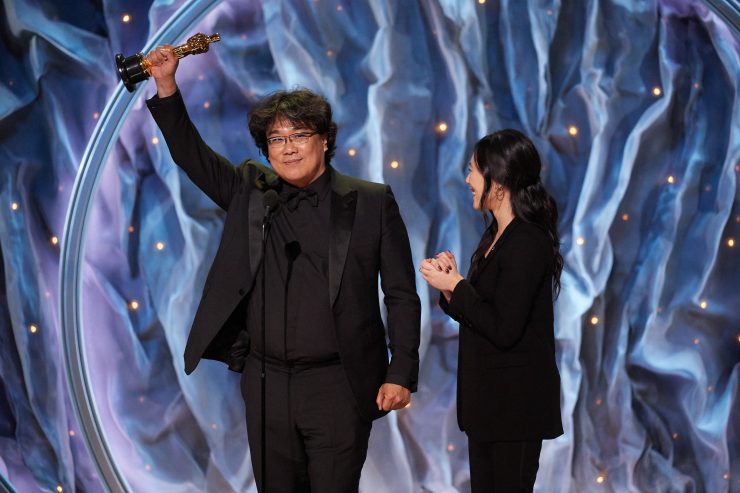 Chapman University Professor Nam Lee is a scholar of Korean cinema and is writing a book on the films of her friend, “Parasite” writer-director Bong Joon-Ho. But even she didn’t see this breakthrough moment coming.

The Academy Award victories for Bong as Best Director and “Parasite” as the first non-English-language film to win Best Picture caught Lee by surprise. On Sunday night, she and some Korean-American friends gathered to watch the Oscar telecast, and before the ceremony they tried to predict the number of awards “Parasite” would win. Only one of the eight saw the film snagging four Oscars, including Best Original Screenplay as well as Best Director for Bong.

The prescient forecaster wasn’t Lee. As a film historian, she knew that Oscar hasn’t been kind to films facing barriers of language and culture.

“I was more conservative,” Lee says. “Others were more hopeful.”

But now that “Parasite” has reset the Oscar paradigm, Lee is eager to consider what comes next, including the release later this year of her book, “The Films of Bong Joon-ho,” from Rutgers University Press.

For South Koreans and the Korean filmmaking community, the Best Picture Oscar is like “Parasite” won the World Series, she says.

A Pivotal Moment for Korean Cinema

Lee couldn’t be happier for Bong, whom she first met in 2011 when she helped organize the Busan West Film Festival at Chapman’s Marion Knott Studios, home to Dodge College of Film and Media Arts. Bong attended as special guest for a mini retrospective of his films.

During Bong’s visit, he stayed on campus and particularly enjoyed having breakfast with students.

“He really gave us a lot of time with students,” Lee recalls. “The students just loved him.”

In the nine years since the festival, Lee’s admiration for Bong’s filmmaking has only grown as she and the director have continued to correspond.

“In his films, the settings and sensibilities are very Korean, but the films are also very transnational,” she says. “His films are entertaining and funny, but in other ways sad and serious. They can be enjoyed without knowing all the various layers of subtext.”

With “Parasite,” Bong digs deeper into themes of class conflict and economic disparity that are familiar to his fans, Lee notes.

“One of the reasons ‘Parasite’ is appealing to a lot of audiences is because we share the same social issues,” she says.

A year ago, as “Parasite” started gaining industry buzz at festivals like Cannes, where it won the top prize, Bong also got new chances to share his artistic vision as well as his engaging personality.

“He’s never about himself – always humble and inclusive,” Lee says. “You could see that in his Oscar acceptance speeches. He wanted to share the moment with others.”

When “Parasite” won the Golden Globe for Best Foreign Language Film, Bong now-famously referenced “the one-inch tall barrier of subtitles” that typically keeps non-English-language films from enjoying U.S. box-office success. Lee’s conversations with her students tell her that such impediments are disappearing.

“I think the barrier is getting lower with a new generation,” she says. “I had this discussion with a class, and one student said it’s because they grew up playing Japanese video games that have subtitles.”

Whatever the reason, Bong’s films resonate deeply with many of Lee’s students. That point hit home Sunday night, when her email inbox filled with notes from students and alumni who had taken her classes. They felt as if they had shared in Bong’s Oscar success.

“One thanked me for teaching how important Korean cinema is,” Lee says. “That was a really rewarding email.”