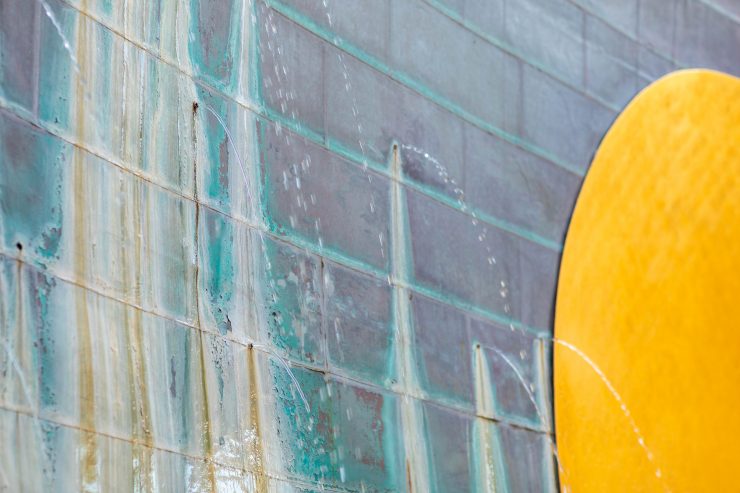 It was Bryleigh Blaise’s second day of classes at Chapman University, and the first-year student wasn’t sure she belonged here.

“I was stressing out,” she says. “I was thinking, ‘I’m gonna’ drop out of college, I don’t have a major —I can’t make it four years like this.’”

Then Blaise ’20 decided to go to the Fish Interfaith Center. When she’d visited previously on a campus tour, she’d noted its peaceful atmosphere. Now, as she returned, she discovered that the labyrinth, a meditative floor path, was open. So she started walking.

‘It was one of those moments that changed my course.’

“I just walked the labyrinth. And I thought, ‘OK, well, I’ll get to the end of the semester, we’ll just see what happens.’” She continues, “I sat in the Columbarium afterward and had a nice conversation with God. I said, ‘What are we doing? We’ve got four years to figure this out — help me out here.’”

Blaise laughs as she recalls the memory. “It was one of those moments that changed my course.”

Experiences like hers are what define the Fish Interfaith Center. For the past 15 years, the center has offered support and inspiration to countless students and other members of the Chapman Family. It’s more than a building — it’s a safe place for students to express themselves and their spirituality.

Today, Fish continues to grow and seek new ways to serve the Chapman community. Its chaplaincy staff has grown to include five chaplains: Rabbi Corie Yutkin, Shaykh Jibreel Speight, the Rev. Gail Stearns, the Rev. Nancy Brink and the Rev. Cisa Payuyo.  The recent hiring of a new director of contemplative practice, Jay Kumar, Ph.D., is an exciting step forward as the center expands its mindfulness programming. Underscoring it all is the same vision that inspired its founding — to be a vibrant hub of interfaith community and spiritual dialogue that welcomes people of all traditions, from the devout to those who find meaning in a secular world view.

“We see spirituality as a significant part of students’ identity,” says Stearns, Ph.D.

Spirituality has always been part of the University’s mission. In 1861, Hesperian College, later Chapman University, was founded by a forward-thinking group of Christians called the Disciples of Christ. The University’s founding was planned in coordination with the inauguration of President Abraham Lincoln, and the Disciples actively recruited and welcomed women as well as students from diverse backgrounds.

“The Disciples chose to go from being a Christian college to a church-related college,” says Payuyo, associate director of Church Relations. “They encouraged people to nurture their spirituality, whatever that may be — you don’t have to be Christian.”

For years, students of faith gathered at the nearby Chapel of Orange (formerly Chapman Chapel), but the chapel wasn’t the space for an interfaith community that the Disciples originally envisioned.

“There were a lot of discussions — do we go Christian? Do we go interfaith? In the end, they landed at both because of the Disciples’ vision,” says Stearns, dean of the Wallace All Faiths Chapel and associate professor of religious studies at Chapman. “The disciples have always been very inclusive.”

Inside the Interfaith Center

Every element of the Fish Interfaith Center reflects universal spiritual themes. Designed by the architect David Martin, the space and art feature themes of cosmos, light, nature and water instead of explicit religious symbols.

“Walking in, people don’t realize they’re walking on artwork,” says Blaise, now a student docent at the center. “Everything has a really large purpose.”

“This space makes you want to take a step back,” says Blaise. “And with nature, sound, light and water, you can take a deep breath and know that at the end of the day the stress isn’t going to matter, because all these things are fundamental.”

Lining the center’s hallway is a collection of sculptural inlaid showcases by artist William Tunberg containing sacred texts from major world religions, including the Torah, the Bible, the Book of Mormon and the Qur’an. A replica of the Golden Temple in Amritsar, India, a chief pilgrimage site,  is on display in the showcase dedicated to the Sikh faith.

A Safe Space for Many Voices

Putting students first is at the heart of the center’s work, Stearns says. The dean transformed a rarely used “Bride’s Room” into a prayer and meditation room with a washing station for Muslim students. Now the space is in high demand.

“During my freshman year, I had a really life-changingly terrible day,” says Mona Asadi ’22. “I went to the meditation room and cried my eyes out. I also used that space to say several prayers in the Baha’i faith — and these are very long prayers. I was able to do that with no interruptions. It was a very healing space for me in that moment.”

Programming at Fish is diverse, from the Sikh Film Festival and “speed-faithing” events to quantum physics conferences and Kristallnacht memorial services, not to forget the annual Baccalaureate service for graduates and their families.

“It was just the coolest thing to recognize that these two faiths do spring from a common root but are very different,” says Blaise. “But in this moment we shared this common bond. There’s always a common tie.”

Staff members are prepared to assist students with a variety of needs, says Payuyo.

“We’ve had situations where a Christian student needed to talk to somebody, but our Rabbi was available instead to talk on that human level of need and grief that the student had,” she says.

During times of crisis, the Fish Interfaith Center holds vigils and memorial services that are open to all.

“When I’m going through a rough time, I want to be here,” says Blaise. “I like being here and knowing that there’s always someone in the office who can talk me through a situation.”

Each week, students gather for the Interfaith Council, a student group that builds bridges, breaks down stereotypes and encourages difficult conversations through interfaith dialogue.

“It’s my hope that if there is some kind of conflict, our students will have a connection to each other that helps them through that issue,” says Stearns.

These efforts have impact. In 2019, Chapman was voted as one of the safest places for Jewish students, second only to Brandeis University.

“To be global citizens, our students must understand the impact of different religions, and be able to speak to someone who has different views,” says Stearns.

In the three-year Interfaith Diversity Experience and Attitudes Longitudinal Study (IDEAL), 86.6% of Chapman students reported socializing with someone of a different religious or nonreligious perspective, and 84.7% agreed that Chapman is a safe place to express their worldview.

Go Out Into the World

Four years after she first walked the labyrinth, Blaise is now a member of the Interfaith Council, past president of the Newman Catholic Fellowship and continues to be grateful for the support she receives from the chaplains and the center.  As her Commencement nears, Blaise says she is grateful for the center’s role in her student experience.

“I’ll always think about what I’ve learned here, which is respect for the diversity of all religious traditions and spiritualities,” she says. “I can’t move forward without thinking about that,” she says. “You can’t come here and not feel like you’re cared for and loved, because someone has given you a helping hand. Those are things I’ll take with me after Chapman.” 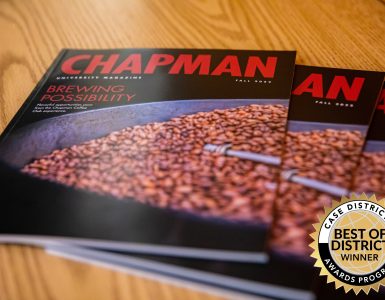