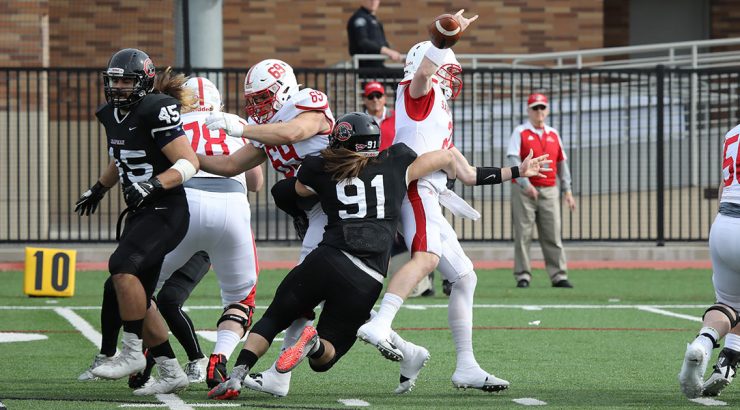 Historic season finishes with Second Round loss to Saint John’s

The historic run for the 2019 Chapman University football team came to a close with a 55-26 loss to No. 8 Saint John’s in the Second Round of the NCAA Division III Football Championship. The Panthers finished the season with a 10-1 record overall – setting the new program record for wins in a season.

The Panthers couldn’t have asked for a better start defensively. The first three Johnnie drives ended with a fumble, an interception and a blocked field goal. However, the Panthers only turned the three opportunities into three points and held a 3-0 lead at the end of the first quarter.

The second-ranked passing offense in Division III took off in the second quarter, scoring three times for a 21-6 halftime lead. The Johnnies scored another three touchdowns in the third quarter to pull away and found the end zone twice more in the fourth.

SJU quarterback and reigning Gagliardi Trophy winner Jackson Erdmann completed 24-of-41 passes for 458 yards and five touchdowns. The Johnnies compiled 646 yards of total offense while Chapman ended the game with 413 yards of offense and just 46 yards on the ground.

The Chapman defense sacked Erdmann four times, forced three fumbles and picked off one pass. Senior Ricky Medeiros was the first to get to Erdmann, taking him down on the Johnnies’ second play from scrimmage and forcing a fumble deep in SJU territory. It was the first of three sacks in what turned out to be the defensive end’s final game. He also broke up a pass.

Senior defensive back Nathan Parkin picked off his seventh pass of the season – and sixth in the last five games – to end the Johnnies’ second drive. Junior Dillon Keefe ended the game with five tackles but got to Erdmann for one sack and forced a fumble, which the Johnnies covered up. He also blocked a field goal and an extra point try.

Saint John’s didn’t turn the opportunity into points but began the second quarter on their next drive with a seven-play, 70-yard march down the field that ended on Henry Trost‘s 13-yard run. The Panthers responded with a 22-yard field goal from freshman Ken Baierl – his second field goal of the game – to make it 7-6.

The Johnnies went on to score twice in the final three and a half minutes of the second quarter to take a commanding 21-6 lead into halftime and continued to light up the scoreboard in the third.

Sophomore Reed Vettel was 16-of-31 in the passing game for 193 yards and a pair of TDs. Junior Jonston MacIntyre threw for 174 yards and a touchdown on 13-of-19 passing. Sophomore Tanner Mendoza ran for 85 yards on 17 carries.

Th Johnnies had three receivers account for over-100 receiving yards, led by 164 yards on nine catches from TJ Hodge. Trost needed just three catches to gain 103 yards – the bulk of which came on a 70-card catch and run on a screen. He also ran for 51 yards.

The Panthers’ season came to a close but not without plenty of history made. Chapman was the second SCIAC program ever to advance to the Second Round of the NCAA Tournament and just the third to host a postseason game. At No. 12 in the latest national poll, the Panthers earned their highest ranking in program history in 2019.

A historic season that won’t soon be forgotten. Thanks for the ride @chapman_fb #weCUpanthers👀 #ChapmanU

Orientation for Fall 2022 Begins Next Week

Chapman University is excited to welcome our new and returning Panthers to campus! Join in on the fun of getting new students familiar with their campus and surroundings. Events kickoff Tuesday, Aug. 23. Visit the...

Campus Community- Late last week, we learned the Center for Disease Control and Prevention (CDC) removed its guidance for institutions of higher education. This guidance has been the primary source for California’s...

COVID-19 Vaccination and Booster Clinic set for Aug. 31 in Orange

Campus Community — We’re looking forward to seeing you on campus soon for the start of the fall semester and trimester. Last week we welcomed our Fowler School of Law students, and as we prepare to begin our fall term...