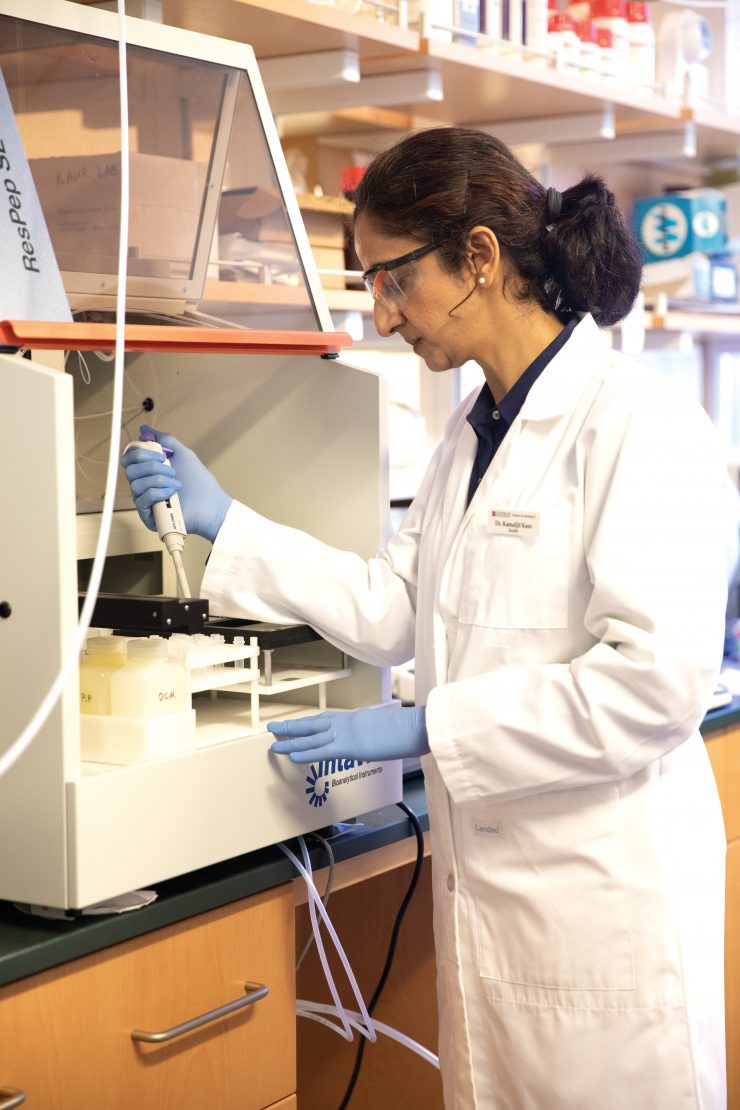 Working in her lab, Professor Kaur reassembles selected peptides drawn from amino acids contained in larger proteins. The result is a binding peptide that can attach to cancer cells, unleashing a tumor-killing payload where it's needed. Photo by Gerald Carter
Science & Engineering

Triple-negative breast cancer is a perfect storm of challenges for both patient and physician.

It generally strikes women under 40, spreads beyond the breast and reoccurs after treatment. Unlike other varieties of cancer, it isn’t driven by hormones, so the one-two punch of chemotherapy partnered with newer therapies that target hormone-sensitive tumors isn’t an option. Hence, chemotherapy is the linchpin of treatment against this particularly aggressive disease, which strikes African American women and Latinas and carriers of BRCA gene mutations in disproportionate numbers.

A scientist at Chapman University School of Pharmacy is working to improve how those powerful cancer-killing drugs reach their targets, potentially increasing survival rates for millions of women while easing the abysmal side effects of treatment. Her work is so promising that it earned a three-year, $400,000 grant from the NIH-National Cancer Institute on which Kamaljit Kaur is the principal investigator.

“It’s a very simple idea, really. I’m not doing any fancy laser treatment or radiation. This is just using existing chemotherapy, but making it much better – many times better,” says Kaur, Ph.D., director of the Center for Targeted Drug Delivery and associate professor at Chapman.

In essence, Kaur has engineered a kind of molecular radar system and attached it to the therapeutic drugs. Working in her lab with sophisticated robotics and software, she reassembles selected peptides drawn from amino acids contained in larger proteins. The result is a cancer-cell-targeting (binding) peptide.

When connected to medication molecules, this structure helps the chemotherapy agent travel intact until it meets cancer cells. That encounter triggers the peptide to attach to the cancer cells, unleashing the tumor-killing payload where it’s needed, rather than throughout the body.

Sparing healthy cells the ravages of chemotherapy is just one reason targeted drug delivery systems like Kaur’s are a rising area of interest in cancer research.

“These chemotherapy drugs are beautiful,” Kaur says. “They are very powerful, and their mechanisms of action are highly effective in combating cancer. However, when they are not targeted, they wreak havoc on ‘good’ cells, and that is the main problem of conventional chemotherapy. If these drugs can be targeted, they could be significantly more potent in fighting carcinogenic cells.”

In the case of triple-negative breast cancer, targeted therapy could also allow for more intense treatment, often the key to battling this cancer. Many patients can’t tolerate elevated amounts of the potent drugs, though, so doctors are forced to reduce the level of treatment, which can lower cure rates or lead to the development of drug resistance, Kaur says.

But if engineered peptides prove workable, the breakthrough could be transformational.

“It is a win-win situation, if it works,” she says.

Kaur and her collaborators at the City of Hope are still testing the engineered peptide-drug conjugates, also known as PDCs, in mice and say it’s too soon to report even early findings. But results Kaur published in the Journal of Medicinal Chemistry showed that PDCs prepared in her laboratory were four times more effective against drug-resistant cancer cells than the drug itself.

That promising direction excites Kaur, who is hopeful such work will contribute to other areas of cancer research. The field captured her attention when she was in graduate school, and like so many people, family members have been touched by the disease.

“Cancer is a very difficult problem to address, and I thought I should probably understand one form better, and then we can go to others,” she says. “So, I’m focusing on breast cancer to basically learn as much as I can. Then, my research can potentially be applied to any other cancer.”