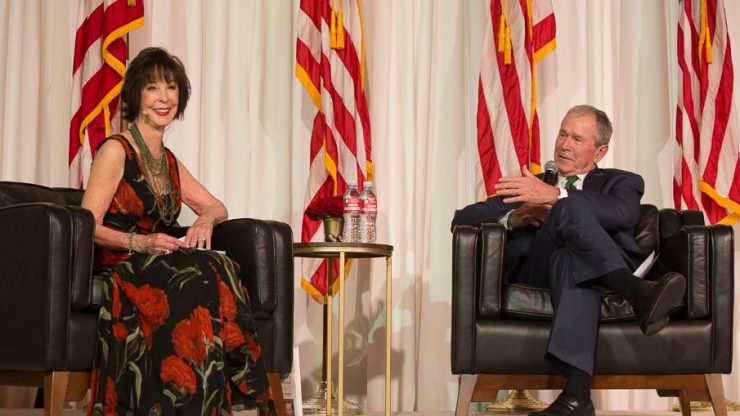 Julia Argyros and former President Bush enjoy a light moment during their Q&A dialogue at the dinner celebrating 20 years of achievement at Chapman University’s Argyros School of Business and Economics.
University News

To mark the occasion of 20 years of achievement and growth since the naming of the George L. Argyros School of Business and Economics at Chapman University, the Argyros Family announced a surprise gift of $10 million to the Argyros School’s endowment.

Julia Argyros and Lisa Argyros ’07 unveiled the news during a special fundraiser featuring former President George W. Bush on Wednesday, Oct. 9. President Bush’s visit was part of the University’s celebration of the 20th anniversary of the transformational naming gift made by Julia and George Argyros, who served President George W. Bush as U.S. Ambassador to the Kingdom of Spain and the Principality of Andorra.

Lisa Argyros, daughter of The Honorable George L. Argyros ’59 and chair of the event, announced, “We as a family are so inspired by all of you, by the money that we’ve raised here tonight and so moved by being with all of the people that we love, and we love this school so much that we want to donate $10 million toward the future of the Argyros School.”

“George and I see three Argyros children involved in Chapman today,” said Julia Argyros. “and it now looks like you’re stuck with us for a long time.”

The unexpected gift was met with applause by the crowd of 350 business leaders and CEOs.

“I don’t know how to express the gratitude,” said Chapman President Daniele Struppa. “You have been a tremendous support to this school, and once again you have demonstrated your love. I want you to know we are grateful for the university, but we are grateful for our students.”

Today the Argyros School is among the top business schools in U.S. News & World Report rankings and offers five graduate programs. The school graduates some 600 students every year, compared with about 180 two decades ago.

Such a culture of achievement was precisely what Argyros envisioned for the school named in his honor 20 years ago. In his remarks during that naming dedication, he called for greatness.

“Dare to dream. Take advantage of the ability to think big and reach high. Be willing to take risks. Fight courageously for the principles you believe in,” Argyros said.

Argyros had already long embodied that spirit in his dedication to Chapman, providing leadership and generosity that has played an unparalleled role in Chapman’s rise to national prominence. Argyros was first elected to the Chapman Board of Trustees in 1976 and went on to serve as chairman for 26 years – the longest tenure of anyone in the role.