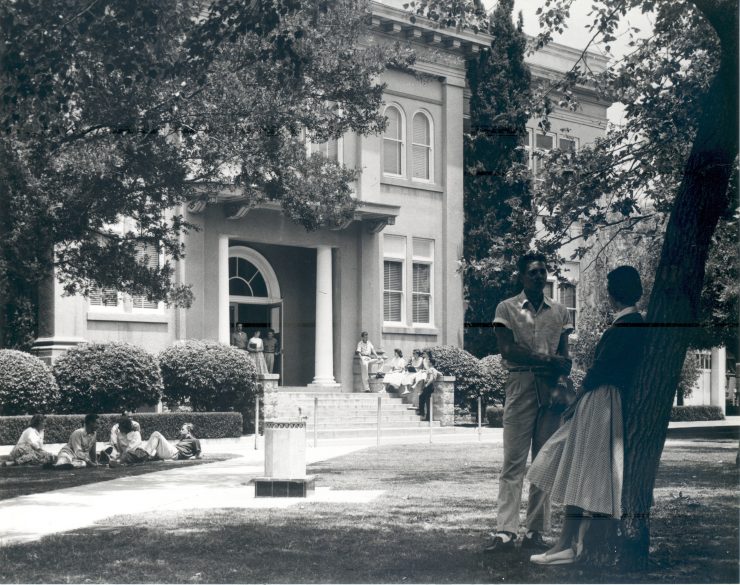 Chapman University hasn’t always called Old Towne Orange home. In fact, it wasn’t until 1954 that the university, known then as Chapman College, made its historic move from Los Angeles to the city of Orange. By purchasing land and buildings from Orange Union High School, Chapman College was able to expand and become the university enjoyed by Chapman students today.

Orange Union High School (now Orange High School) first opened with a temporary site on September 21, 1903, with 86 students enrolled in its first year and four areas of study: Classical, Literary, Scientific, and English. This temporary site, located on the Dobner Block on South Glassell Street, served the city until the construction for the permanent Orange Union High School building finished in the first week of July 1905. Orange Union High School opened its new and permanent location on September 4, 1905, with 110 students enrolled. Over the years the school expanded, having added three new buildings during the 1920s. One of those buildings was the auditorium, constructed in 1923.

In the 1950s, due to the growing student body and aging buildings, Orange Union High School’s board of trustees developed a building proposal that would bring existing buildings up to code, create new buildings at the current site, and create a new campus at a new site. Construction for the new high school site, located near the northeast corner of Walnut Avenue and Shaffer Street, began in 1952. Although there were still several finishing touches to be made for the new campus in 1953, Orange Unified High School changed its name to Orange High School and set the moving day for May 15, 1953.

For the next two years, Orange High School still used the old high school’s gym, athletic fields, and other facilities while construction was still being completed until 1955, as part of an agreement with Chapman College. Several buildings from Orange Union High School, still used by Chapman University today, were registered in the National Register of Historic Places in 1975.

Display Image at Top/Students on the shady quad outside of Wilkinson Hall, Chapman College, Orange, California. This building was the first on the campus of Orange Union High School, designed by local architect, C.B. Bradshaw and constructed in 1905 by R. J. Noble. In 1921 it was moved 250 feet and turned 90 degrees to its current location. Acquired in 1954 by Chapman College, it houses the Provost’s office, Academic Affairs, English & Comparative Literature, Graduate Studies, and the departments of Religion and Philosophy. It is listed in the National Registry for Historical Buildings.