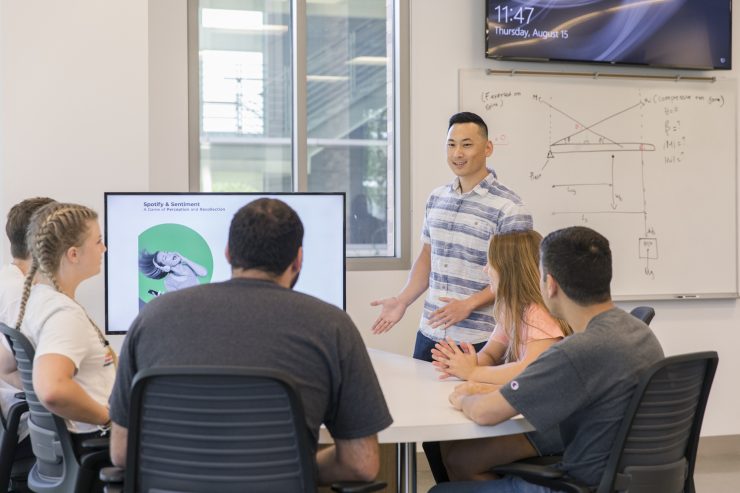 Jin Jung speaks to his classmates about an app he designed.
Science & Engineering

How This Marine Found His Passion for Cybersecurity Experience in the Military and at Chapman University showed Jin Jung his path.

Some know exactly what they want to do by the time they’re in high school — many need a little time to figure it out. That’s why Chapman University student Jin Jung ‘20 enlisted in the Marines after high school. He wanted more direction. Self-discipline. And maybe some help paying for college.

Jung became part of the Marine aviation program, where he calibrated aircraft software. As an aviation support equipment manager, he worked within several military databases. He began developing a deep interest in computer science and cybersecurity.

“I didn’t realize how interesting the field was until I got my hands dirty and started to explore data security in a real context,” he says.

He also had the realization that he wanted to help make the systems better. “In my opinion, their database access was a bit too lax,” he says. “That’s when I started to think a lot more about data security.”

Now Jung is continuing his education in cybersecurity at Chapman University, earning his B.S. in Computer Science.

Experts project that by 2020, more than 200 billion devices and objects will be connected through software and technology. And with more connected devices come more potential cybersecurity threats.

“When you watch the news you hear about massive data breaches at these big companies, like with Facebook and Instagram,” says instructor Rene German of the Fowler School of Engineering.

“At Chapman, we start our cybersecurity students off with a strong foundation: here’s the terminology, here’s the equipment, here are the tools — now here’s this potentially vulnerable network,” German says. “How would you get in? And once you can, flip your hat and figure out how best to defend.”

Getting Ready for Success

As a Marine, in addition to discovering his passion for computer science, Jung found the self-discipline he wanted.

“We worked 12-hour days,” he says. “I realized if I dedicated even 60% of that time to school, I would be setting myself up for success.”

By the time Jung finished his service, he was ready for the next step – he wanted to enroll in college and, thanks to his GI Bill funding, he had the financial resources. After talking to multiple counselors, he applied to Chapman University, a Yellow Ribbon School that provides additional financial support beyond the GI Bill as well as a caring community of veteran students.

The Art of Computer Science

Creativity and art aren’t always associated with computer programming, but those are two skills Jung brings to his field of study.

“The way I think about it, writing a computer program is creating something from nothing,” he says. “You start with a blank screen, create an algorithm and the possibilities are endless.”

Jung tests these possibilities at Chapman, like when he created a budgeting app for his Visual Programming class taught by Derek Prate, or when he learned more about computer science and security on a macro level. “My data communication and networking class with Dr. Michael Fahy gave me a holistic view of how the internet works and data security fits into the big picture,” he says.

“The way I think about it, writing a computer program is creating something from nothing. You start with a blank screen, create an algorithm and the possibilities are endless.”

Understanding the framework for things people use everyday — but often take for granted — only increased his interest in the field.

Forward Into the Future

The days when Jung wasn’t sure about what he wanted to do seem distant to him now, he says. Now, looking toward the future, he wants to create a remote server-hosted database with a focus on creating a secure environment.

To keep the engine of motivation running on all cylinders, Jung plans to embrace every stage in the creation of computer programs and processes, from brainstorming and exploration to design and implementation.

“Computer science is its own universe,” Jung says.  “I’m excited that there’s always more to learn.”