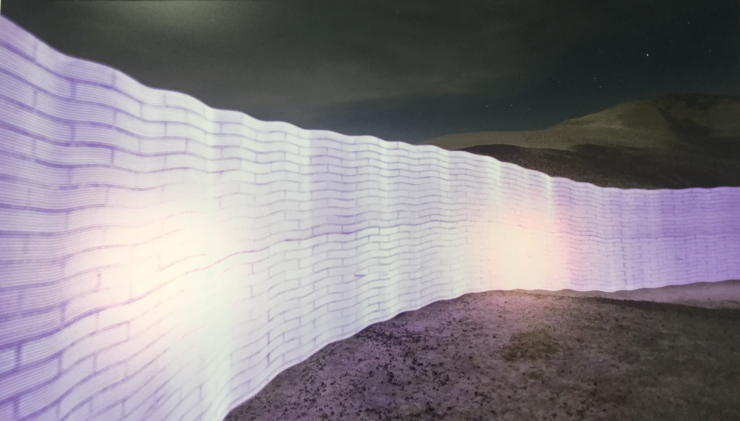 Typically, borders are meant to divide. This fall, the Chapman University campus community will unite to explore the concept of “borders” and numerous issues surrounding the U.S.-Mexico border.

Featuring four curated art exhibits and 12 events, “La Frontera – The Border,” also known as, “The Border,” culminates in the “Border Conference” in November with keynote speaker and former Border Patrol agent Francisco Cantú, author of “The Line Becomes a River: Dispatches from the Border,” which won the 2018 LA Times Book Award.

Of special interest is an on-campus performance by Fandango Fronterizo, a transborder singing group that meets annually to sing to each other across the U.S.-Mexico border. Additionally, the University will host the first Undocumented Students Conference.

The purpose of “The Border” programming is to allow students and the community to engage with border issues through works of art and thoughtful dialogue.

“Right now, border issues are being debated at kitchen tables and online. They’re being debated in our Congress. Our hope is that by doing this, we’re creating space for informed and civil debate to model for our students. And I think being informed comes from all of the different perspectives, including the arts,” Says Lisa Leitz, Ph.D., associate professor and Delp-Wilkinson Endowed Chair in Peace Studies and one of the coordinators of the project.

“We think of exhibits and events like these as an educational opportunity where we introduce students to topics that may not normally be introduced to them in the classroom,” says Essraa Nawar, development coordinator at the Leatherby Libraries and the chair of the arts, exhibits and events committee. “It captures their attention and provides them with an ‘ungraded’ learning opportunity that inspires their minds and opens their world to different cultures and political views.”

The Power of Art

The idea to create border-based programming rooted in art was inspired by the Escalette Permanent Collection of Art, Chapman’s “museum without walls.” Curators of the Escalette Collection have intentionally collected works that engage with border issues. As the collection grew, it became apparent that students would need help contextualizing the artwork in order to experience it more fully. The programming, like the current border debate, continues to expand.

Lindsay Shen, Ph.D., director of art collections at the University and one of the event coordinators, comments on the power of art to shift perspectives. “There’s a really nice photograph in the library by  Mexican photographer, Pablo López Luz, and I think it shows you that art can really disorient us in a very helpful way. It’s an aerial photograph of the border. In the photograph, you can’t tell which side is the U.S., and which side is Mexico,” says Shen. “And I think that can profoundly impact us to say, Oh, I thought I knew this, but actually the artist has disoriented us and helped us to step away from what we think we know,” says Shen.

All works of art on display have been carefully curated to create this helpful “disorientation,” and to allow students to engage with border issues in creative ways. Notable opportunities range from BorderClick Tijuana art, which features photography by transborder students, to former U.S. Border Patrol facilities worker Tom Kiefer’s photography of objects confiscated from detained migrants.

“There are different ways of knowing. There are stories and maybe certain currents within a piece of information that can only be understood by a creative utterance,” says Marcus Herse, Guggenheim Gallery Coordinator and organizer of a photography installation in Beckman Hall.

While the central focus of “The Border” programming is art, there will be numerous opportunities for interdisciplinary exploration of border issues. Throughout the semester, professors, guest lecturers, artists and authors will speak on topics ranging from peace studies to health issues to economics. Additionally, several First-year Foundations Courses have been created in conjunction with the programming to make use of the art exhibits and discussions happening across campus.

“We wanted lots of opportunities– not everybody’s going to respond to visual arts so we wanted some performance pieces, too,” says Leitz. “We also wanted to reach people who maybe wouldn’t go to sit in on a political discussion about this topic, but the arts would pull them in, in a very different way.”

The impact of the programming will be far-reaching. Foot-traffic alone will allow hundreds of students to engage organically with intentionally-placed artwork throughout the course of a day.

But “The Border” isn’t just for Chapman students; instead, the leaders of this project hope the community will engage with the art exhibitions and events, too. Plans are under way to create outreach books clubs for local high school students. Jan Osborn, Ph.D., associate professor with the Smith Institute, the department of english and leader of this initiative, will incorporate readings from authors featured in “The Border” programming and even arrange opportunities for the students to meet some of the guest speakers.

Shen and Leitz hope the programming will lead to greater understanding of border issues and, ideally, greater empathy.

“Personally, as an immigrant, I would like people to be aware of those of us who cross borders. We’re human beings, we come with our own skills and talents, we’re not a problem,” says Shen.

“What I want out of this is to help is for our students to be better informed citizens. I don’t want to dictate their politics, but I do want them to be informed and engaged,” says Leitz. “And that’s why I’m in education. And that’s what I hope that, as a university, this is what we’re providing.”

To see a full list of events and exhibitions, visit the La Frontera – The Border information page.