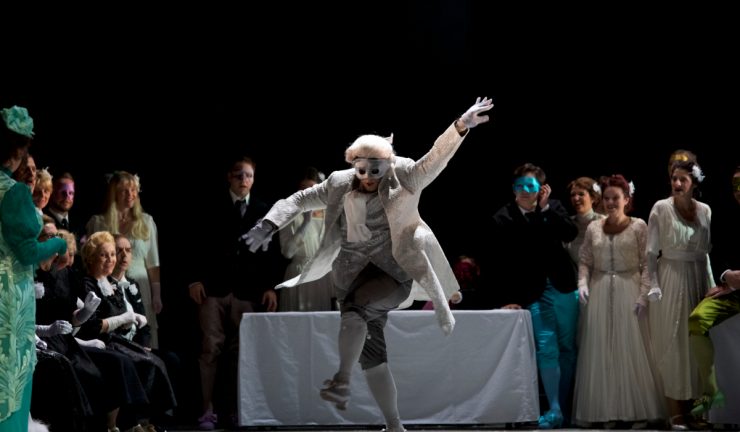 Tenor Brett Sprague ’10 took a big leap this year in his opera career, moving across nine time zones to Munich, Germany and launching a two-season engagement at the Theater Erfurt.

The College of Performing Arts graduate credits his conviction to focus on music performance to Chapman’s Dr. William Hall.

“Dr. Hall’s belief in me and my talent gave me the confidence I needed to chase a very scary dream when I was only seventeen years old,” said Sprague. “I do not know where I would be today without Dr. Hall — not only for recruiting me to Chapman but in also being an incredible mentor and artistic inspiration.”

What experiences at Chapman unexpectedly helped you in your career path?

The campus community experience taught me about respectful interaction, making connections and how to respectfully, and effectively, converse with donors and benefactors. I learned how to work in a team — which is every production — how to adapt to new ideas and styles and how to communicate clearly. In short, I learned how to be an adult because that was the expectation. I always felt respected, and in turn I always try to show respect — that is not always the case in music training programs.

Contrary to common belief, opera is vibrant and thriving in today’s culture. We will always have the classics, produced in big glitzy theaters with period sets and costumes, but there is a lot of modern innovation of the art form.

There is a new movement in production — that I love — of taking operas of all eras and sizes and producing them in site-specific locations.

What are the biggest misconceptions about what you do?

The most difficult misconception to counter is this idea that opera is a dying art and nobody cares about it — that is so far from the truth. It is not boring, or only for rich or older audiences.

We are telling very real, human stories — it can be enjoyed by everyone.

On a personal level, the hardest things to hear from people who don’t understand what I do is, “OK, you sing, so what is your real job?” or “Well, anyone can sing, why did you get an education in that?” This is my real, full-time job.

“Art, of all kinds, is essential to the survival of culture; diminishing it and taking it for granted can only adversely impact society.”

This move is a huge step in your career, was this something you saw yourself doing when you were a student?

Actually, it was my time at Chapman that inspired me to perform in Germany. When I chose to go to Chapman, I didn’t know if I would focus on performing, but my experiences and mentors at Chapman developed my dream of being an opera singer.

I studied German throughout my undergraduate work and traveled to Munich for a summer language course. During that summer I decided someday I was going to perform in Germany.

How fluent are you in German?

I’m certainly not fluent, but I’m working on it. My understanding is better than my ability to speak. Rehearsals are conducted in German, which has been no problem. Without an incredible and thorough instruction from the German faculty at Chapman, I would have been completely lost when I got here!

When weighing your decision to move to Munich, what were your chief concerns and how did you get past that?

I knew moving to Europe would isolate me. Starting over in a new culture, language and people was definitely my biggest concern. Luckily my family and friends are amazing. In the age of FaceTime and WhatsApp, we talk a lot and that keeps me from feeling isolated. My mom, in her infinite support, told me that opportunities like this don’t come often so I should absolutely go for it.

What differences do you notice between European and American theatrical work?

The music is the same, the general idea is the same, but from a business perspective, it is much different. German theaters are subsidized by the government, whereas American arts funding relies almost entirely on donors and grants.

From a personal perspective, I am able to work as a guest artist in theaters all over while having a fixed position in one theater, starting next season. This type of fixed position is incredibly rare to find in the U.S. I can make a regular income without having to constantly freelance, which provides me more security. Also, here I can get high-quality health care and pension plans through my work, unlike back home.