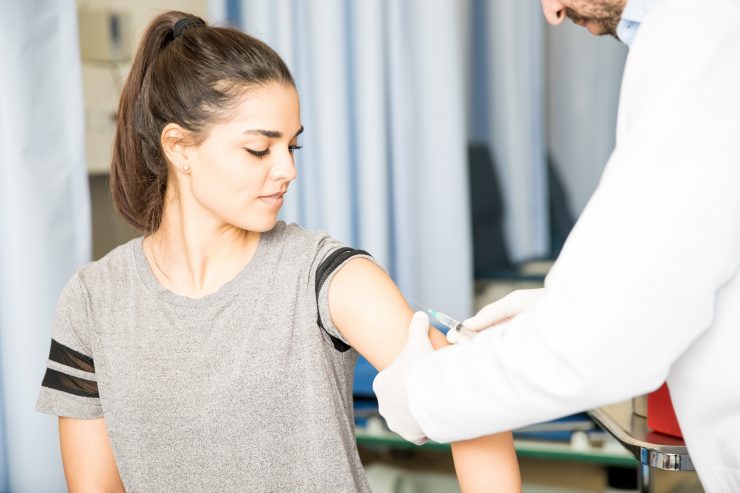 Vaccination Is Best Protection Against Measles, Say Chapman Health Experts No reported cases at Chapman, but students are encouraged to check immunization records.

It’s the souvenir nobody wanted. The high number of measles cases spreading across the United States had their origin in unvaccinated international travelers bringing the virus home, says Jeff Goad, Pharm.D., professor and chair of the Department of Pharmacy Practice at Chapman University’s School of Pharmacy.

Starting in 2000, measles was considered extinguished in the U.S. But the combination of unvaccinated travelers visiting countries where the virus still flourishes and homegrown populations that eschew immunization has given the bug a new foothold.

“If only vaccinated people were the ones traveling, it’s highly unlikely we would have imported measles cases. The outbreaks we’ve seen recently have resulted from unvaccinated individuals bringing measles back and exposing communities with low vaccination rates, such as the Israeli travelers who infected Orthodox Jewish communities in New York. These imported cases are then sustained by transmission to populations of unvaccinated children within the U.S.,” Goad says. “Israel, Ukraine, Japan, Brazil and the Philippines are all experiencing measles outbreaks.”

To date, no measles cases have been reported at Chapman, says Jacqueline Deats, a nurse practitioner and director of Student Health Services. Students, staff or faculty members who develop symptoms should immediately contact their health provider. Anyone who suspects they’ve been exposed should call Student Health Services at (714) 997-6851. Students can confirm that they have submitted immunization records through the online Health Record Form.

There are myths that vaccines cause autism or that getting the disease is the best immunity. Nothing could be further from the truth.

Other communities with low vaccination rates include those who believe immunizations are risky, a faulty perception that endangers public health.

“There are myths that vaccines cause autism or that getting the disease is the best immunity. Nothing could be further from the truth. Vaccines do not cause autism, and vaccine-preventable diseases kill people,” said Goad. “In California, the first baby this year has already died of pertussis, a disease completely preventable by vaccinating the pregnant mother.”

Protection is straightforward – get the measles-mumps-rubella vaccination, commonly referred to as MMR, Goad says. It’s available at your pharmacy without an appointment or at your doctor’s office.

Recommendations from Goad and the Centers for Disease Control include:

Some people should not get the MMR vaccination or should wait. To learn more, visit the online information page for the Centers for Disease Control and Prevention.