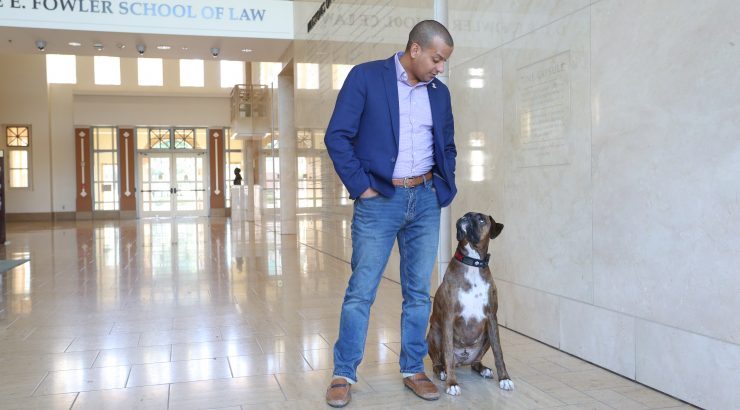 Robyn Norwood
9 min read
The newest students at Chapman University’s Dale E. Fowler School of Law are not only the most diverse class in the law school’s history, they also are among the most highly qualified, with a median LSAT score of 157 and a median GPA of 3.42. Their resumes include experience as a city council member, a White House intern, a university professor and a professional athlete. This is the first in a series highlighting their stories.

Marine Lance Corporal Juan Valdez volunteered to carry the radio that day in 2006 on a patrol that led down a muddy road in the city of Karma, Iraq.

From a perch nearby, a sniper marked Valdez’s position by the movement of the 10-foot radio antenna Valdez had been forced to raise for better reception, and squeezed off a shot. The bullet entered Valdez’s right arm, tore through his lungs, ricocheted off a rib and exited through his back, fracturing a vertebra.

“He or she was either trying to shoot me in the face or shoot me through the chest and into my heart,” Valdez said. “But he or she wasn’t that good of a shot.”

Twelve years later, Valdez is a first-year law student in Chapman University’s Dale E. Fowler School of Law  after recovering from his injuries enough to return to Iraq as well as serve in Afghanistan before retiring with the rank of sergeant in 2013.

Sitting in the lobby of Donald P. Kennedy Hall with his faithful companion Tank, a service dog that helps him manage his long-term symptoms of post-traumatic stress disorder, Valdez talked about the difficult, winding path that has brought him to law school and a role as an advocate for veterans.

“I need a fight. I like standing up for people,” said Valdez (JD ’21), who will speak at the City of Mission Viejo’s Veterans Day celebration on Sunday, Nov. 11. “I joined the Marine Corps for altruistic ideals, and I still carry those with me. I like the idea of standing up for the defenseless.”

Valdez, now 34, was rescued that October day in Iraq by his squad leader, Sgt. Jesse Leach, who dragged him to safety and stanched his wounds until he could be evacuated. New York Times reporter C. J. Chivers and photographer Joao Silva, embedded with the Marines on the patrol, captured the attack and rescue in vivid detail from incredibly close range. Valdez, with two collapsed lungs and blood and air seeping into his chest cavitites, had life-threatening injuries.

“By the time I got to the operating table, I just wanted to die, I was in so much pain,” he said.

But he woke up the next day, and his long journey to recovery had begun.

“What he went through was traumatic to say the least,” said Antoinette Balta ’03 (JD ’06, LL.M ’11), president and co-founder of the Veterans Legal Institute, an Orange County nonprofit for which Valdez has volunteered. The institute provides pro bono assistance to low-income veterans. “But he continues to have such a positive outlook on life, and he really thrives on this notion of public service. He’s an incredibly special human being,” she said.

A Yearning to Serve

Born in the Dominican Republic, Valdez came to the United States with his family at age 4 and grew up in Boston. At 19, he enlisted in the Marine Corps at about the same time he became a U.S. citizen.

“I always wanted to be in the military since I was a kid,” he said. “I remember playing soldiers and bad guys. I always loved American history, when we talked about all the sacrifices these men made for a higher purpose. That really attracted me. I really enjoyed the idea of doing something for someone other than myself.”

His first deployment was to the Middle East on the USS Kearsarge, and he was aboard the ship in port when a missile attack narrowly missed the ship, killing a Jordanian sentry. His second deployment was to Iraq, where he was shot. His recovery was a longer path than he had hoped, but by 2008, an opportunity to return to Iraq arose.

“I canceled all my appointments, told the doctor I was fine,” Valdez said.

He wasn’t. Valdez still struggled with back pain, shortness of breath and symptoms of PTSD such as anger, forgetfulness, hallucinations, nightmares and feeling uncomfortable in crowds.

“It’s what I wanted to do,” he said with a shrug. “I felt like I owed it to my friends to go back. I felt like I let them down when I was hurt, so I carried guilt. And I just loved what I did.”

By 2010, Valdez had transferred to Camp Pendleton, and in 2011, the Purple Heart recipient served his final deployment in Afghanistan, a country he remembers as at moments both beautiful and serene.

Serenity was hard to find when he returned to the U.S.

“I started having a lot more pain,” Valdez said. “I had physical therapy, saw a chiropractor. Nothing really changed. It was at that point my doctor said, ‘This is about as good as you’re going to get. We’re going to try to get you medically retired.’”

Valdez officially left the military in December 2013 and began pursuing his education on the GI Bill, first at Saddleback College and other community colleges before transferring to the University of California, San Diego, where he earned a degree in political science.

While at Saddleback, he met Balta through the Veterans Legal Institute’s work with the many current and former military students on that campus, and he continued as the organization’s San Diego outreach coordinator while at UCSD.

Valdez and Balta talked at length about the possibility of him attending law school, and she pointed him toward Chapman, arranging an introduction to Dean Matt Parlow.

“I remember meeting with Juan when he was applying to law school, and I was really impressed with him and his life experience,” Parlow said. “Juan is a relentlessly positive person who has brought so much to the Fowler School of Law community during his first semester here.”

Valdez’s legal education is being paid for by Veterans vocational rehabilitation benefits, but in addition to the GI Bill, there are other benefits and supports available to former service members through Chapman’s Veterans Resource Center.

Around Kennedy Hall, Valdez is hard to miss with Tank close at hand.

It was during his readjustments to civilian life that Valdez learned to appreciate the support a dog provides. His first was Midas, a boxer like Tank, but not a trained service dog at first.

“As a puppy, 10, 11 weeks old, he’d cry and whine in his crate whenever I was having nightmares,” Valdez said. His wife, Christy, picked up on something.

“She thought he was crying and whining to get out, go potty, so she’d let him out, and he’d run to the side of the bed and jump on the bed and wake me up. He just picked up on my anxiety. He started doing the tasks without being trained. He was checking things out for me, he was creating space automatically between people and me. He was watching my back, waking me up from nightmares. I slipped and fell and threw out my back in Boston, and he dragged me up a flight of stairs.”

Valdez also credits Midas — eventually a certified service dog — with sensing the distress of a suicidal Marine buddy who had written out a note before a visit to Valdez. Midas wouldn’t leave the friend alone.

“Sat on the couch with him, on his lap, had to be next to him. And I said, ‘Well, dude, looks like somebody wants you to stay over.’ The next morning, he told me he had been ready to commit suicide that night and didn’t do it because of Midas.”

Midas passed away in 2016, shortly after Juan and Christy’s first daughter was born. (They welcomed a son in October, and Juan has two older daughters.) With no need to be convinced of the value of a service dog, Juan got another boxer, this one trained for his duties.

“Tank helps with hearing alerts,” Valdez said. “I can’t hear certain tones. Someone knocks on the door, rings the doorbell, I can’t really hear it. I have tinnitus, so I hear a ringing in my ear.”

Tank walked across the stage with Valdez at commencement at UCSD – “I wanted to get him a cap and gown but I couldn’t find one,” Valdez said – and is a near-constant companion in law school. Valdez expects Tank to be at his side when he is an attorney, perhaps in politics. Valdez has served as a military legislative intern to Florida Congressman Matt Gaetz in Washington, D.C., and he worked in the Orange County office of State Senator Patricia Bates in Laguna Hills.

Or perhaps Tank will join him in a courtroom.

“If I’m a prosecutor, maybe I’ll put Tank up there with the witnesses to help calm them,” Valdez said.