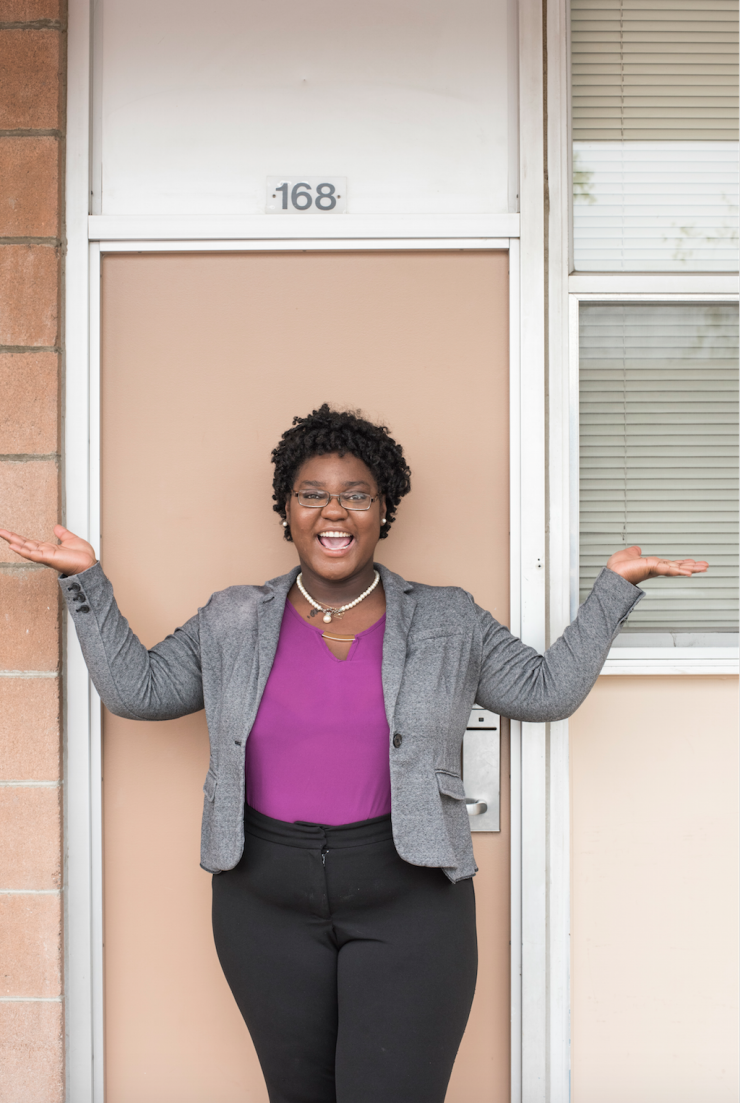 It’s often in the supermarket checkout line when Jasmine Johnson ’15 is filled with memories of growing up as a homeless child.

She looks down at the cart with the $5 carton of ice cream and the $4 wedge of cheese and thinks about how she’ll carry the groceries to her own refrigerator, ready to keep them clean and safe in a place she calls home.

She can’t help but shake her head, recalling days when home was a car or a succession of shelters, and stocking up on perishables was impractical and unaffordable.

“I used to say, ‘When I get older and I have my own refrigerator, it’s going to be filled with block cheese.’ Now I look at my cart when I’m checking out and I say, ‘Oh, my gosh, Jasmine, what is this?’ It used to be the dollar store and 20 cans of raviolis, 30 packs of ramen noodles and two big old liters of Shasta soda. So yeah, things are definitely different,” she says.

But the Chapman alumna, who still considers the University’s student housing her first real home, knows things aren’t different for many others. The people on the streets, in cars and shelters, struggling to overcome homelessness, tug at her heart.

So telling her story is an important part of her life now, along with working full-time and guiding her younger brother through community college and young adulthood. She speaks to local groups and clubs in an effort to raise awareness about homelessness as she also adds polishing touches to the second draft of a memoir she expects to publish next year.

She volunteers, too, as a Big Sister for Big Brothers Big Sisters of Orange County. Her aim? Not sympathy, thank you very much. Rather, she hopes to raise awareness that might lead to action.

“My goal, one, is showing people that homelessness has multiple faces. And two, letting people know that there are so many kids out there and it wasn’t their choice to be in this situation, who didn’t bring this on the family. When you say you don’t want shelters in your community, or this is not your problem, you’re affecting them as well,” she says. “Making life easier for kids in this situation is my goal.”

Like many who have been homeless, Johnson recounts a complicated and snowballing series of events. The breaking point came when extended family members forced her mother from the family house they were renting while Johnson and her brother were small, she says.

“The constant struggle broke her in a way, and ever since she hasn’t been the same. That’s when we became chronically homeless,” she says.

Solving root problems took a back seat to day-to-day survival.

“It’s really lonely, even though you’re with your family. You reach out to people, they ostracize you or push you away. When you’re panhandling, they look at you nasty, like you have the plague or something,” she says.

“It’s stressful, and it starts to take a toll on you. When you try to get into a shelter and they don’t return your call, or they put you through so many hoops to get into the shelter, in the back of your mind, as the sun gets closer and closer to setting, you start to worry: Where am I going to sleep?”

Thanks to guidance from a high school counselor and Chapman scholarship assistance, Johnson found a home at the University. Today she and her brother, Leland, both work and share a subsidized apartment in Fullerton. Their mother is not able to be part of their daily lives and remains mostly homeless, occasionally finding space in a shelter, Johnson says.

“You do everything that you can,” she says. “But when there are few resources or very, very few affordable places, it’s just a cycle.”