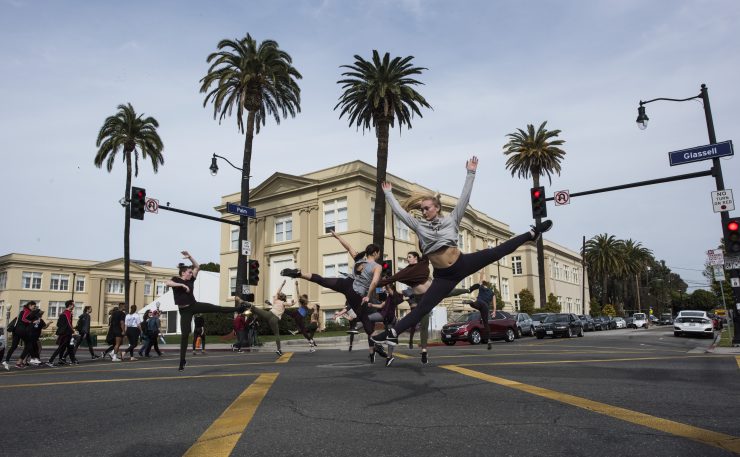 Crosswalk morphed into stage, as motorists and pedestrians became instant audiences to a moveable feast of creativity.

While fellow Chapman University dancers performed in other unexpected campus settings– amid the paintings in the Hilbert Museum of California Art and alongside a Tony DeLap sculpture outside Leatherby Libraries – about a dozen students glided across the asphalt at the corner of Palm and Glassell.

Called “Three Site-Specific Dance Performances,” the project made location and presence as much a part of the show as the dancers’ graceful movements.

“We were adapting the whole time,” said dancer Ashleigh Koenig ’18. “I liked being close to people so I could see their reactions. They felt like they were a part of it.”

With each “walk” sign, dancers leapt into the street, performing brisk crosswalk choreography before loping to the curb. As the light changed and traffic resumed, the dancing continued on sidewalks, with one group snaking into nearby Smith Hall, then reemerging down its back steps.

The experience was fleeting, but high school students who witnessed the mashup of life and art said the memories would endure.

“They’re such unique ideas,” said Zachary Hernandez, who was among the high school visitors taking in the dances as part of a day of exploration that included workshops, lectures and studio performances.

“It’s like a new message of what dance is.”