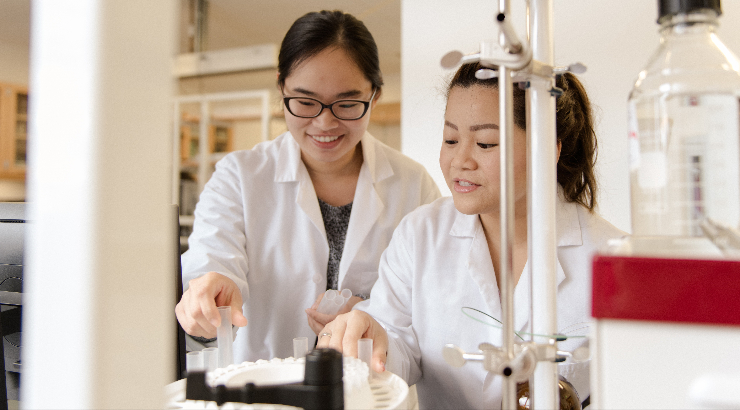 Chapman University’s School of Pharmacy (CUSP) has received full accreditation from the Accreditation Council for Pharmacy Education. This changes the status of Chapman’s Pharmacy School from Candidate Status to Fully Accredited.

“We have met every milestone along the way to achieving this goal on time and on plan,” said Ron Jordan, R.Ph. FAPhA, founding dean of Chapman’s School of Pharmacy. “I am grateful for the hard work and commitment of our faculty, staff, pioneer students and the support of Chapman’s leadership. The investment in this school is already producing graduates who are getting jobs in the health care and pharmaceutical industries.”

The accreditation news coincided with an announcement that the five-year-old School of Pharmacy already ranks among the nation’s top pharmacy schools in total research funding. CUSP rankings soared in a new report from the American Association of Colleges of Pharmacy, which ranked CUSP at No. 46 in all funding, a leap of 13 places from last year.

In addition, CUSP’s funding from the National Institute of Health earned it a ranking of No. 43 in that category, a jump from No. 64 last year. The association report ranked CUSP at No. 4 in total research among California pharmacy schools.

The rankings were based on data from 96 pharmacy schools, including several affiliated with medical schools and major research institutions.

Established in 2013 as the first School of Pharmacy in Orange County, the school received precandidate accreditation status allowing it to open in the fall of 2015.

Operating year-round on a trimester system, this most recent trimester the school had 248 Pharm.D. students, 30 M.S.P.S. students and 12 Ph.D. students; and graduated its first cadre of 74 students in the first Pharm.D. cohort in May this year. The school previously graduated three cohorts of masters students.

The School of Pharmacy is located at Chapman’s Harry and Diane Rinker Health Science Campus in Irvine, Calif., and has 44 faculty who teach, perform clinical work in the community and produce research.