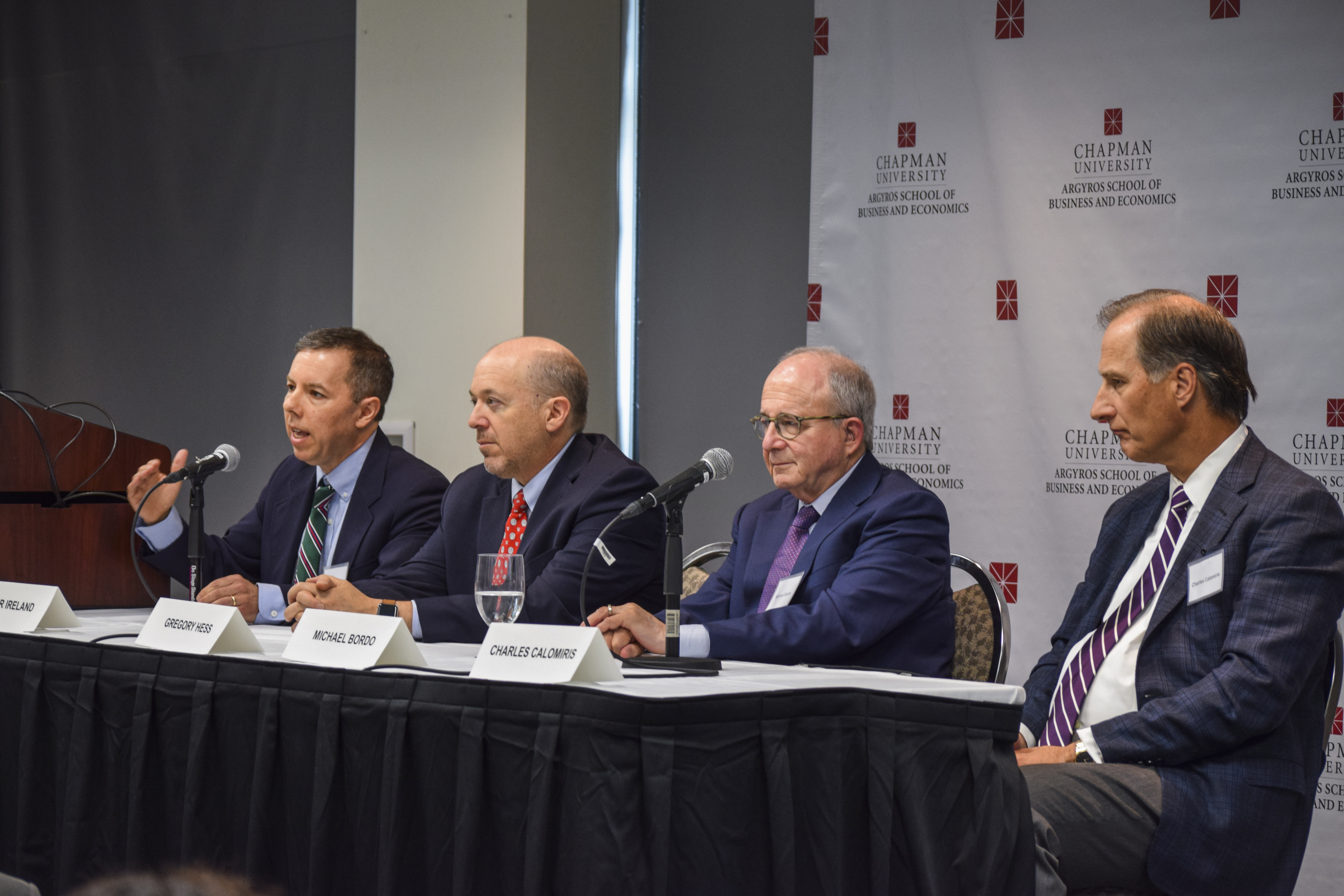 Since its creation in 1973, the Shadow Open Market Committee (SOMC) has met semi-annually to discuss these types of questions about the policy choices and actions of the Federal Reserve’s Open Market Committee. Founded by Karl Brunner of the University of Rochester and Allan Meltzer of Carnegie Mellon University, the SOMC is comprised of distinguished monetary economists drawn from academic institutions and private organizations. For the past 45 years, these conversations have taken place exclusively in either New York or Washington, D.C., but for this summer’s conference, the SOMC chose Chapman University as the location for its West Coast debut.

The theme of the conference, “The Fed’s Return to Normalcy,” had presenters and discussants talk about central banking and monetary policy during and after the financial crisis fade away. The SOMC members in attendance were Michael Bordo, professor of economics and director of the Center for Monetary and Financial History at Rutgers University; Charles Calomiris, the Henry Kaufman professor of financial institutions at Columbia Business School; Gregory Hess, the president of Wabash College; and Peter Ireland, the Murray and Monti professor of economics at Boston College.

“They are very busy people and famous in the economics and finance world so we are very honored that the SOMC chose Chapman for their first meeting outside of the East Coast,” said Marc Weidenmier, Ph.D., professor of finance at Chapman’s Argyros School of Business and Economics and one of the lead organizers.

The conference began with a breakfast meeting, where faculty, graduate and undergraduate students from various universities across Southern California exchanged ideas with local business leaders and the SOMC presenters. This led to a question-and-answer (Q&A) panel with the SOMC members that Thomas Turk, Ph.D., dean of the Argyros School, described as “informative and incredibly interesting” in his opening remarks.

The rest of the day consisted of the SOMC members presenting their position papers for 20 minutes and an assigned discussant analyzing the paper for 10 minutes, followed by a short Q&A. The discussants for this conference included: Charles Kahn, professor emeritus of finance and economics at the University of Illinois; David Andolfatto, vice president in the Research Department at the Federal Reserve Bank of St. Louis; William Lastrapes, professor of economics at the University of Georgia; and Mark Carlson, senior economic project manager at the Board of Governors of the Federal Reserve System.

Bordo, the first presenter, established the environment of what a typical SOMC meeting looks and feels like.

“The way we do things in the Shadow is that we actually do not use slideshows,” he said. “We really give presentations.”

Although Sanjana Goswami, an attendee of the conference, was used to having a PowerPoint to guide her during academic presentations, she thought that the no slideshow format was a refreshing change of pace.

“I really like the concept because we can get distracted and caught up on the slides during these types of presentations,” said Goswami, a fifth-year doctoral student in economics at the University of California, Irvine (UCI). “It’s a nice to just sit back and listen on what they have to say.”

Weidenmier notes that the SOMC members are especially talented in their expertise as they are able to boil down technical, academic economic topics for the layperson to understand. And it is this aspect that presenter Peter Ireland finds the most rewarding in this conference setting.

“In academics, you get used to writing really technical research papers and in the classroom. And you wind up spending just a lot of time on indifference curves, budget constraints in economics or the models in finance.” Ireland said. “So it’s rewarding to take a step back and ask, ‘How can we use economics in finance to address policy issues?’ And also, ‘How can we speak about those issues in a way that will reach not only colleagues in academics and not only students that are specialized in the field but also members of the business community in banking and finance?’”

Padma Sharma, a doctoral student studying economics at UCI, sat in the front row throughout the conference and commented on how valuable it was for students to be present at the event.

“Compared to other academic conferences, it’s very unusual because it’s a good mix of academic content and real policy applications,” said Sharma. “Honestly, since this conference usually happens in the East Coast, I didn’t think I would’ve been able to ever go, but since it was at Chapman, I was able to experience it and it was very useful for me.  I really hope the SOMC comes back again here next year.”