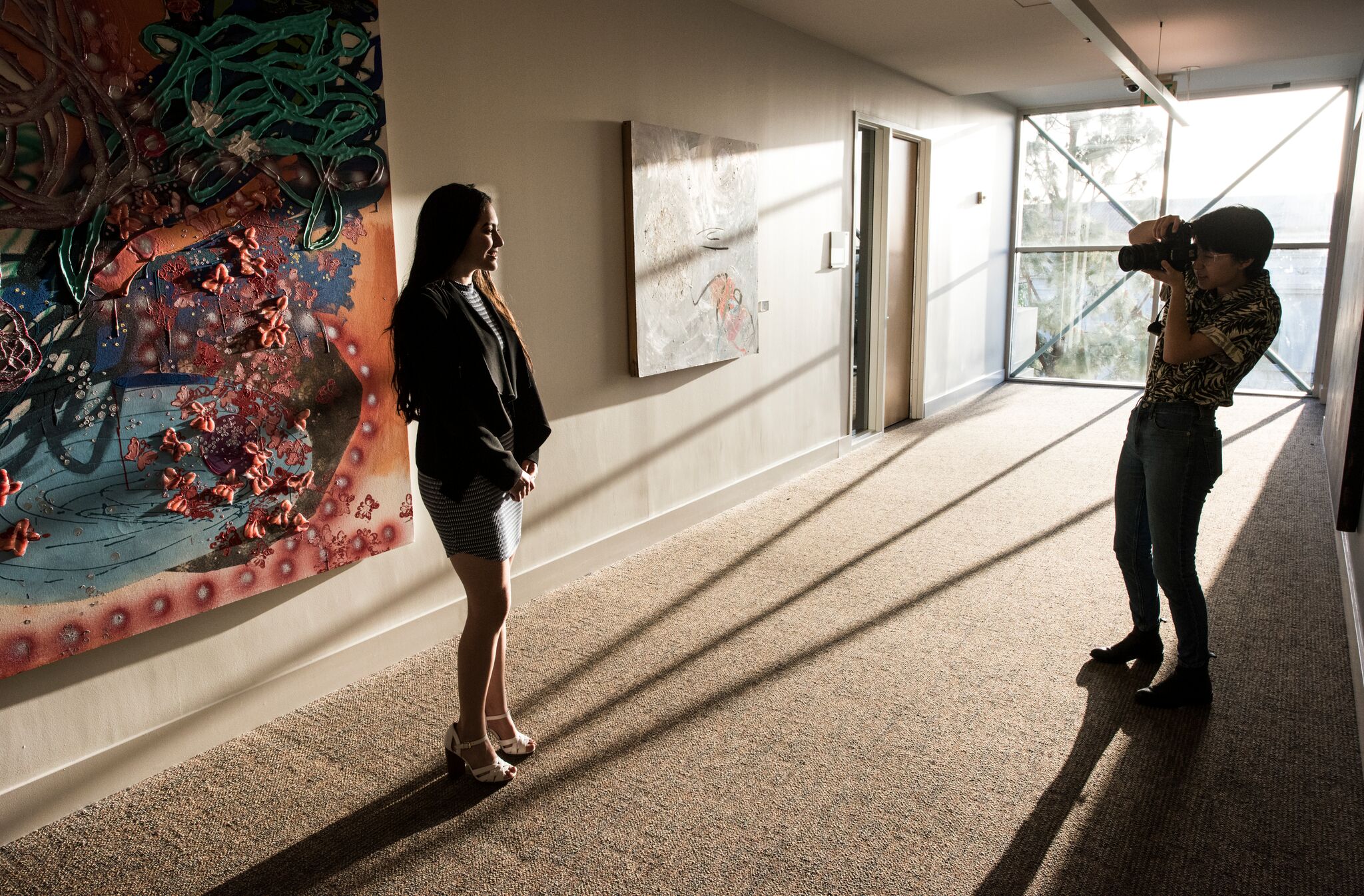 Her achievements in high school helped Nathaly Del Real ’19 earn a full scholarship to a small New England liberal arts college, but she felt as adrift there as the snow. A first-generation college student, she was nearly 3,000 miles from her family in Santa Ana before transferring to Chapman University.

“There was a full ride, but it was very different, very foreign to me. That was the cost of it all,” said Del Real, who transferred after two years. “I really did fall in love, not only with Chapman, but I wanted to be here, more connected to my community. Here, I feel a lot of support.”

Christian Castillo ’20 grew up in the Harbor City area of Los Angeles and finished high school with a diploma and two associate degrees he earned through a program with L.A. Harbor College. But the University of California schools he considered seemed far too big to him as he prepared to become the first in his family to attend college.

“Chapman, I call it a leap of faith. Its location was a prime reason and I just felt the small size would give me a closer community,” Castillo said.

“My parents, they’re always like, ‘You have to set an example for your siblings. It adds a little bit of pressure, but I do like having that identity of being the one.”

Del Real and Castillo are just two of about two dozen students who have taken part in the first sessions of Chapman University’s new First and Foremost program, a semester-long exploration of potential majors and career opportunities for first-generation students that is also meant to provide them with a community as they begin a journey their parents never made.

One in every six students offered admission to Chapman’s Class of 2022 would become a first-generation college graduate, and about 19.5 percent of current Chapman undergraduates are first generation. First and Foremost and the First Generation Summer Bridge Program are just two of the programs offered through the Promising Futures Program to support them.

The First and Foremost students, about a dozen each semester beginning in fall 2017, participated in six two-hour evening sessions at which they learned about creating their own “elevator pitch,” networking, interview skills and creating resumes and LinkedIn profiles, even coming away with headshots. They also completed assessments such as the Myers-Briggs personality inventory and The Paw, an interest and ability analysis designed to help suggest career paths, and attended campus-wide events such as Career Expos and Mock Interviews.

“You guys all deserve to be here,” program coordinator Crystal De La Riva ’09 (M.A. ’17), herself a first-generation graduate, told the students one evening as they paired up to practice skills making connections with potential employers. “You deserve to network. You have the right to own this. I don’t want you to think, ‘I don’t want to bother them.’ The worst they can say is, ‘I’m kind of busy right now.’”

First-generation students might once have entered college with academic deficits, but De La Riva said that is no longer the case at Chapman.

“Our first generation-students come in extremely prepared, intelligent – they’re set, especially compared to when I started college. They’re light years ahead of me,” De La Riva said, noting the abilities of first-gen students fall on a spectrum, as do those of all students. “The program focuses a lot more on the cultural capital, the social capital, really developing their confidence that they belong in an institution like this and that they have something, if not more than what their peers have, to offer.

“That’s why our program focuses on tapping into that, and their sense of community. I think that’s one of the things I notice for the students, is feeling like they’re not alone,” said De La Riva, who is assisted with the program by Sahzeah Babylon (M.A. ’03), a career educator in Chapman’s office of Career and Professional Development.

Many of the students already are starting to have visions of their futures.

Roxane Cociu ’21, a student from Romania majoring in kinesiology, is interested in sports medicine or pre-med studies.

Castillo, a business major, wants to help communities that are struggling economically rebuild themselves from within.

“I think of it as being against gentrification or having this outside investment, and the idea that the people in these areas can invest in themselves and that protects their community,” he said.

De La Riva watches and waits expectantly to see what her students will do with their educations.

“They’re creating this opportunity, creating a legacy,” she said. “I always tell them when they graduate, ‘You know, you’re the last first-generation student in your family. Your children are not going to be first generation.’

“It’s really kind of a bittersweet moment. There’s a pride, but also a recognition what that means for them culturally, and how they want to pass that down.”

Featured image at top/Helen Cabrera ’21, a First and Foremost participant, is photographed by Amanda Galemmo ’20 to provide a headshot for her LinkedIn profile. (Photos/Dennis Arp)