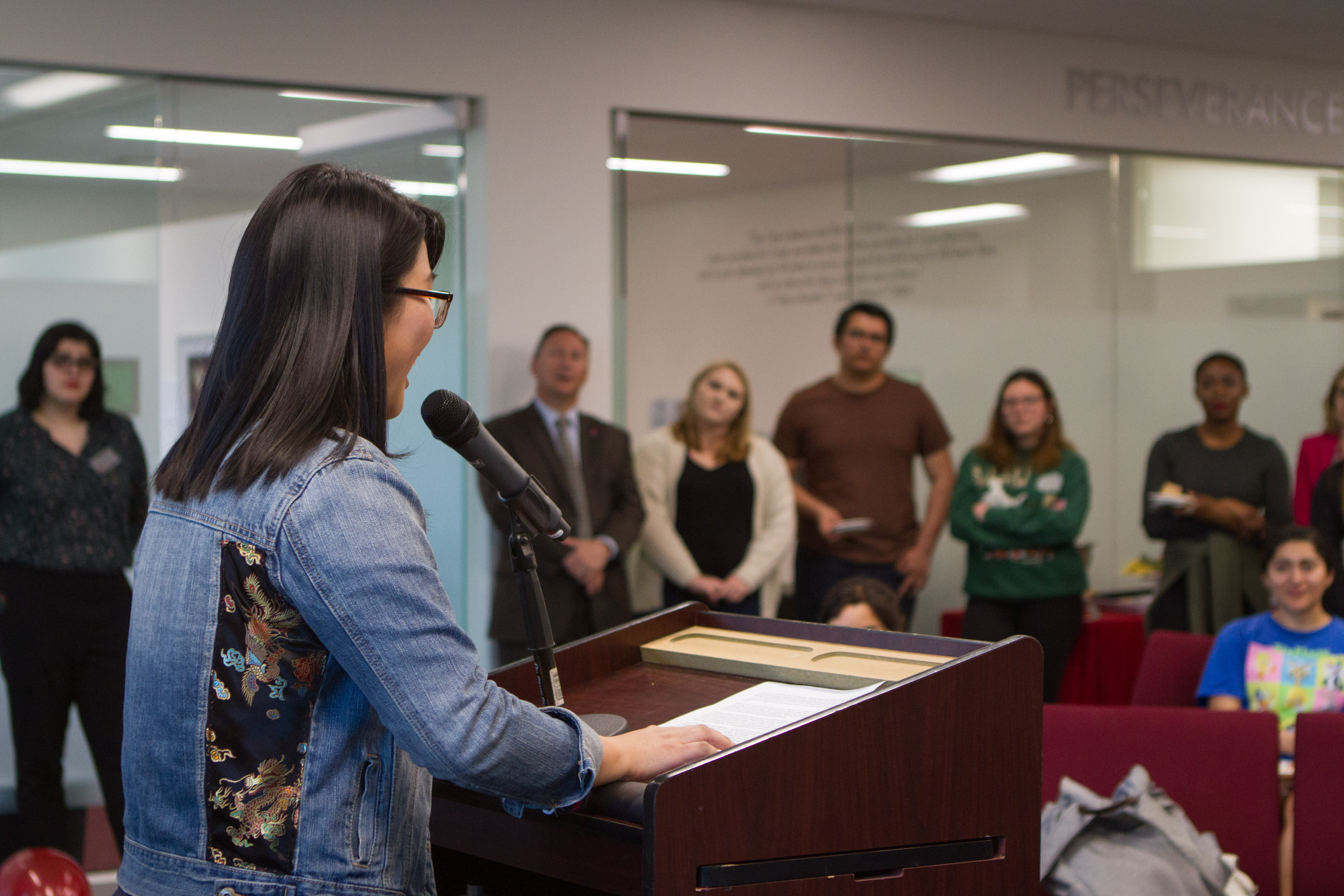 Cross-Cultural Center Celebrates First Birthday Center organizers reflect on an inaugural year of providing a safe haven for all identities.

When asked to describe the spirit and energy of Chapman’s Cross-Cultural Center, communication studies student Beatrice Lam ’20 chose the words, “vulnerability” and “reassurance.”

“When I walk into this room, there’s no negative vibes and judgment goes out the door,” Lam elaborates. “That makes it very easy to be yourself.”

Lam’s experience with the Cross-Cultural Center is one of many students whose college careers have been impacted by having a physical space on campus where they can feel a sense of belonging.

Located on the third floor of Argyros Forum, the Cross-Cultural Center features a central lounge area designed for informal gatherings and four unique conference rooms, each focused on an underrepresented cultural identity as depicted through the room’s artwork and an assigned theme that encapsulates that identity. Since its opening on Feb. 27, 2017, the Cross-Cultural Center has aimed to bridge divides and foster a more inclusive campus climate.

Jerry Price, Ph.D., vice president for Student Affairs and dean of students, explains that the center’s function is not to isolate students from the rest of the community. Instead, it serves as a comfortable place for students, who are sometimes vulnerable to feeling isolated within the community, to come, relax and feel energized to go back out and contribute to the larger student population.

Now at one year old, the center has hosted countless discussion forums and film screenings; started a growing mentorship program; and gained national recognition from the Association of College Unions International. However, outside of that list of noteworthy achievements, according to the campus, the center’s biggest accomplishment in its inaugural year is that it has provided a community and a home for Chapman students.

On Feb. 26, during the center’s anniversary celebration, Farrah Su ’17, an alumna that served on the Cross-Cultural Center Advisory Board and was one of the many students influential in getting the center built, called the space a “safe haven” in her speech.

“It was a place where I laughed the fullest. It was a place where vulnerability was encouraged more than smiling, and where sharing how your day went in full detail was what was expected,” Su reminisced. “This space was created for folks who want to find a community and to explore their identities.”

Monday’s event was more than birthday cake and a milestone moment. In his remarks, Dean Price compared the anniversary to a split time in running. The race and the work with the center is not finished yet, but the one-year marker allows the campus to pause, evaluate, and to look ahead to the future.

“There are going to be so many people that are going to walk in and out of these doors and this space is going to continue to adjust to cater to their needs and cater to them,” said Su. “This space is always changing, and that is what I find so beautiful about the Cross-Cultural Center.”

Display image at top/Farrah Su ’17, one of the student leaders influential in getting the Cross-Cultural Center built, shares how the space has impacted her personally during the center’s one-year anniversary celebration. (Photo/Amanda Galemmo ’20)