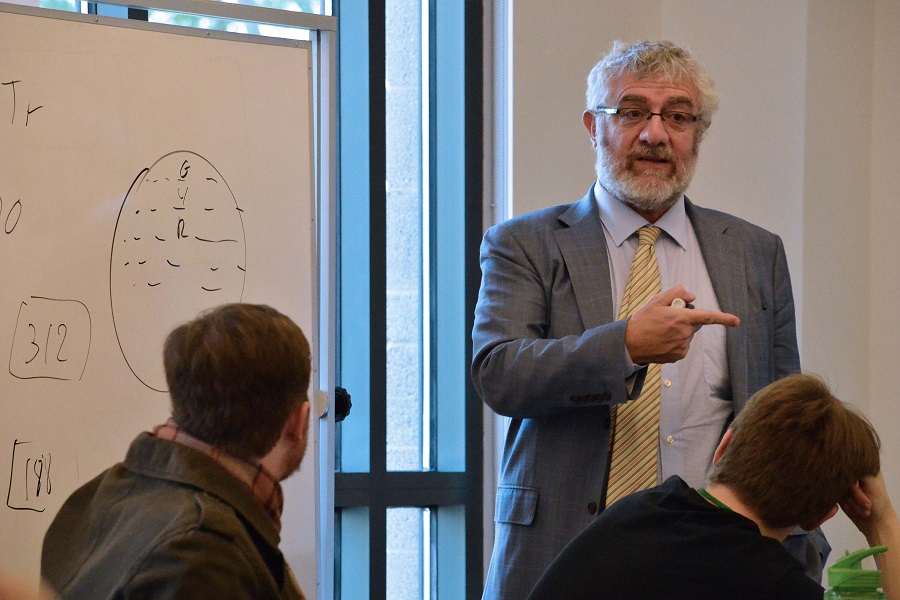 Chapman University President Daniele Struppa, Ph.D., will record his first podcast in San Diego Thursday evening as other math enthusiasts from across the globe gather in the same city for the 2018 Joint Mathematics Meetings (JMM).

This event is a partnership between Story Collider and Springer Nature and will present five true, personal stories from mathematicians about the experiences that have shaped their lives and careers.

Struppa will share a personal story about his time as Chancellor at Chapman University in 2008 when he helped attract a team of physicists to the university, including one world-renowned name in the history of quantum physics, Yakir Aharonov.

He had previously met Professor Aharonov at George Mason University in Virginia where he was giving a talk.

“I knew Yakir was a special person because one afternoon, during one of his seminars, I asked a question, apologizing for not understanding a point he was making,” Struppa said. “To my surprise (and … delight) he responded: ‘Don’t apologize Daniele: I think nobody else in this room understood what I am talking about, but you are the only one brave enough to ask!’”

At that moment, Struppa decided he definitely wanted to work with Professor Aharonov in the future. He soon got his chance when he invited the professor and a few of his collaborators to his Irvine home for dinner, planning on hosting an evening of mathematics and physics. After dinner, the plates were traded were easels and it was time to discuss mathematics.

Aharonov introduced Struppa to the notion of “weak value” for the first time, an idea that he had pioneered. He then continued to delight the group with an explanation of what he called, “superoscillations,” claiming these violated century old celebrated mathematical theorems. Aharonov then challenged the group to solve one fundamental question…. which Struppa further addresses in the podcast.

Although the event is not live-streamed, it will be recorded and uploaded to Before the Abstract’s website soon after the event.

Springer Nature produces podcasts to highlight the importance and utility of storytelling in science. As the need to communicate research beyond the confines of scholarly circles grows, Springer Nature is offering authors and potential authors the opportunity to talk about their real-life experiences as researchers, in their own words.

While serving as chancellor, Struppa continued his scholarly research focusing on Fourier analysis and its applications to a variety of problems including the algebraic analysis of systems of differential equations, signal processing, quantum physics, and pattern recognition. He has authored more than 200 peer reviewed publications and is the editor of several volumes. He has edited or co-authored more than ten books, including Bicomplex Holomorphic Functions; Regular Functions of a Quaternionic Variable; Noncommutative Functional Calculus; Analysis of Dirac Systems and Computational Algebra; Fundamentals of Algebraic Microlocal Analysis; and The Fundamental Principle for Systems of Convolution Equations.

Struppa’s mathematical endeavors have taken him to many countries. He has lectured extensively in Japan (where he first went to learn algebraic analysis from the Kyoto school), the Soviet Union (he coauthored a comprehensive article on mean-periodicity in a volume of the Soviet Academy Encyclopedia of Mathematical Sciences, later translated in English), Mexico, China, and in Europe (United Kingdom, France, Sweden, Germany, Ukraine, and Italy).

The prestigious national program is funded by the Arnold and Mabel Beckman Foundation, whose mission supports basic research in chemistry and life sciences.