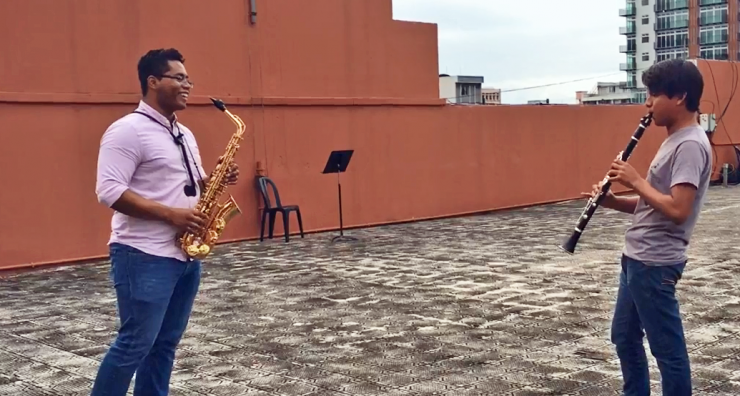 Carlos Hernandez ’17 didn’t necessarily go to Guatemala City to play his saxophone on a rooftop. But as video of the open-air jam session shows, the moment was just too emotive to keep cooped up inside.

During a back-and-forth of improvisational jazz with one of his students, Hernandez displays the depth of his range, then he smiles broadly as he watches his protégé take a turn. The Guatemalan teenager beams as he riffs on his clarinet, his Nike sneakers tapping to the beat.

Sometimes it takes months before a new player of jazz conjures memorable phrasing. After Hernandez had conducted just a couple of master classes with students at the Escuela de Musica Municipal, he heard traces of Miles Davis and Charlie Parker.

“It was inspiring how quickly they grabbed onto that,” says Hernandez, a student of music performance and music education in the College of Performing Arts at Chapman University. “It was almost as if they needed someone to unlock what they already knew.”

Hernandez journeyed to Guatemala, the ancestral home of his father, to “Translate Musical Languages and Intelligences,” as hisresearch project title noted. Participating in Chapman’s Summer Undergraduate Research Fellowship (SURF) program, Hernandez worked with project mentor and Chapman Professor Christopher Nicholas, DMA, who has been guest-conducting orchestras in Guatemala since 2010.

A scholar of the Sistema program in Venezuela, Nicholas studies how social entrepreneurship through music can transform lives. He’s seen it happen in Mexico, Haiti, Guatemala and other developing nations, and he notes that “focusing on how art changes the world can only be done by delving into this world.”

Hernandez says that by teaming up with Nicholas and immersing himself in the research experience, he grew as a student, teacher and performer.

“It was extremely rewarding,” Hernandez says. “Coming from an underserved community myself, I know how satisfying it is to grow personally and musically. I wanted (the students) to have the freedom to make mistakes, to refine their skills and just to get better.”

Growing up in Santa Ana the son of immigrant parents, Hernandez taught himself to play the recorder, refining his skills as a member of his church band. At age 9, he took up the soprano sax.

“I was very out of tune a lot of the time,” Hernandez recalls. “But I recently showed my teacher (Chapman woodwind professor Gary Matsuura) a recording of me playing, and he was very impressed. He said I played really well for someone so young who was without a teacher, even if I was out of tune.”

Hernandez says he has never lacked for drive, resourcefulness or confidence.

“There’s more than me in that situation – kids brimming with talent but who need help getting noticed, who need the means to get to the next level,” he says.

Nicholas knew that Hernandez would thrive at the school in Guatemala, providing next-level training to musicians as part of a team approach.

“The schedule is so packed; I’m presenting to teachers when I’m not rehearsing the orchestra for five hours,” adds Nicholas, director of bands, woodwinds and brass studies in Chapman’s Hall-Musco Conservatory of Music. “That’s why it was so great to have Carlos, because he could do a presentation on a completely different topic while I was talking to faculty.

Over the eight days of his visit, Hernandez gave three presentations, did three master classes in jazz and saxophone, and performed a solo recital. Throughout it all, he benefited from being comfortable on stage and personable in the classroom.

“I find it easy to connect with people, and I’m guessing that I have that in my pedagogical approach as well,” he says.

Confidence also comes from working with Nicholas, says Hernandez, who praises his mentor for his patience and his dedication to helping young musicians grow as he shows them a way out of poverty.

“He provided such an incredible experience,” Hernandez enthuses.

For his part, Nicholas says he always returns to Chapman a better teacher and musician.

And what better example is there for a professor to set for his students?

“We’re examining what makes us distinctive among other great music schools, and one of those things is that students get opportunities for high-level research and scholarship,” Nicholas says. “It was great to see Carlos take advantage of this opportunity.”

Display image at top/A rooftop jam session with one of his Guatemalan students was a highlight of Hernandez’s work with musicians at Escuela de Musica Municipal in Guatemala City.

The Chapman University College of Performing Arts is marking 10 years of transforming lives with a 2017–18 season that includes some signature events, several of which have honored or will honor special friends. For more information or to buy tickets, visit chapman.edu/copa10th.

In Honor of Bette Aitken

In Honor of Joann Leatherby

In Honor of Judy Garfi-Partridge

Desdemona: A Play About a Handkerchief

In Honor of Marybelle Musco

Musco Center for the Arts

In Honor of the Women of Chapman

Musco Center for the Arts