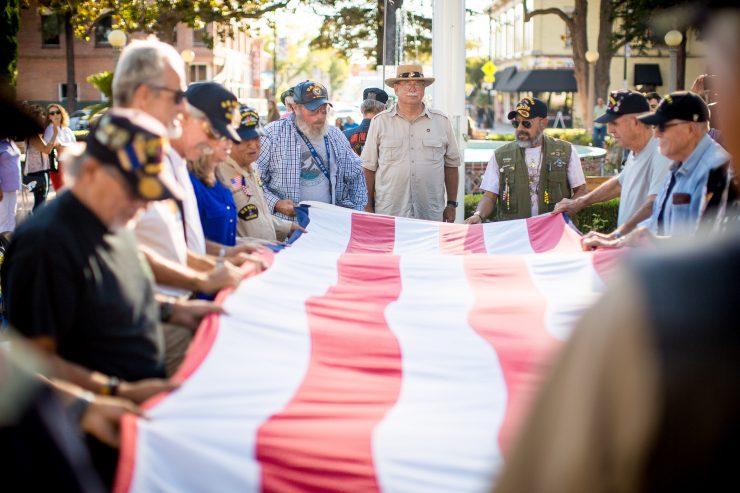 For Those Who Serve

Every Wednesday evening just as the sun fades, something special happens in Old Towne Orange’s historic Plaza Park. A small group of veterans gathers to watch the flag retire for the night and pay tribute to their comrades in arms. Organizers say a few words or invite a guest to speak, and on first Wednesdays they read the names of newly fallen service members. Then a Chapman University music student raises a trumpet and fills the air with the poignant notes of taps as the veterans lower and fold the flag amid the dying light.

Chapman students have performed taps since the ceremonies began a decade ago. One of the longest serving among those musicians is Matthew LaBelle ’17, who has volunteered at the ceremonies throughout his four years at Chapman. As LaBelle’s graduation day drew near, the veterans presented him with a plaque recognizing his service.

The veterans treasure the unique gifts each student contributes to the tradition, says event organizer Don Blake, a retired Marine.

“Just pulling the flag down all by itself is kind of empty,” he says. “The music adds a sense of specialness to the ceremony.”

LaBelle, a 2017 Musco Scholar, is grateful for the chance to experience the deep bond shared by the veterans.

“I’m just glad that I can serve this way,” he says.