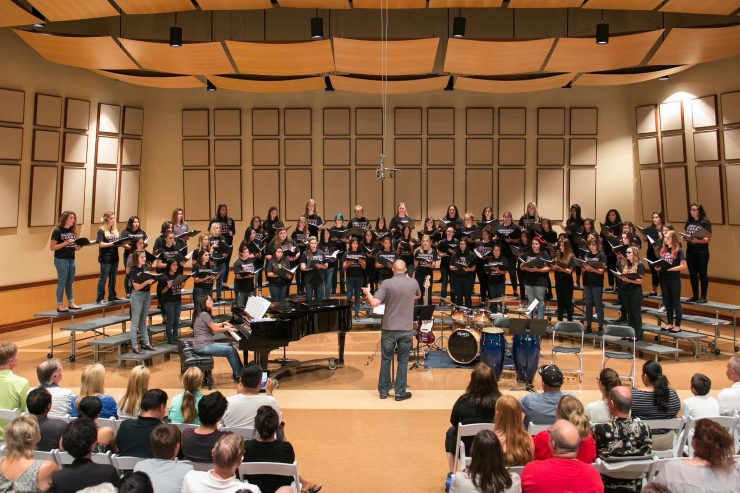 A Chapman University alumnus who transformed a high school’s chorus from a single class into an award-winning program with more than 200 singers has been named the 2017 Grammy Music Educator of the Year.

Keith Hancock ’02 (M.A. ’04) was chosen from among 10 finalists and more than 3,300 nominees from all 50 states. The award is given by the Grammy organization to recognize teachers who inspire students and make a lasting impact in the field of music education and the communities where they teach. This was Hancock’s second consecutive year as a nominee and finalist for this award.

Hancock received his award and a $10,000 honorarium at the 59th Annual Grammy Awards on Feb. 12 at Staples Center in Los Angeles.

“It is an incredible honor to be chosen among the finest music educators in the country. It’s a proud moment to have my hard work in the classroom validated and respected,” said Hancock, who is the choir director at Tesoro High School in Las Flores, Calif. “I share this award with the amazing music educators and colleagues I’ve had in my life, most of them from Chapman, including my chief musical mentor, Bill Hall, as well as my amazing students who inspire me each day.”

Clearly, the inspiration flows both ways. When Hancock arrived at Tesoro in 2002, there were about 35 students participating in choir. Now there are 225. Last year Tesoro’s music program was honored as one of five national Grammy Signature Schools, earning a $2,500 award spent in part on sheet music and equipment.

Under Hancock’s leadership, Tesoro choirs have toured in Europe and performed at Carnegie Hall, and in 2012 and 2016 performed at American Choral Directors Conventions, an honor he considers their highest.

Hancock has also served as director of Chapman’s summer Choral Music Camp, offered to local high school students, and has taught undergraduate courses in the College of Performing Arts, where he himself studied. 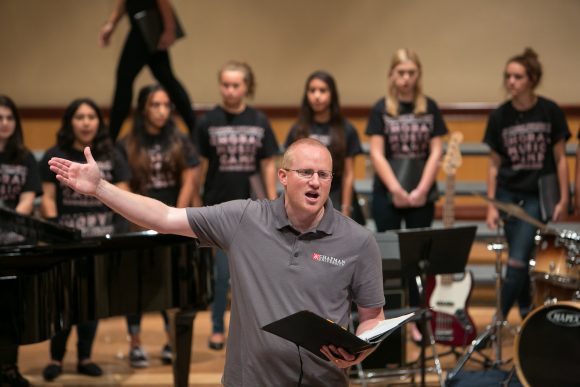 Watch him lead one of his choral groups and it’s immediately evident that his passion for music is infectious.

Many of his students have gone on to success in just about all  facets of the music business. But no matter their career choices, he believes the lessons they learn in chorus will stay with them all their lives.

“Students learn personal accountability in a group situation, how to deal with setbacks, and how to live their lives with empathy and love,” he said. “My students know that when we reach a goal, there is always a new goal to set or higher levels of excellence to attain, and this is something they can apply to many facets of their life.”