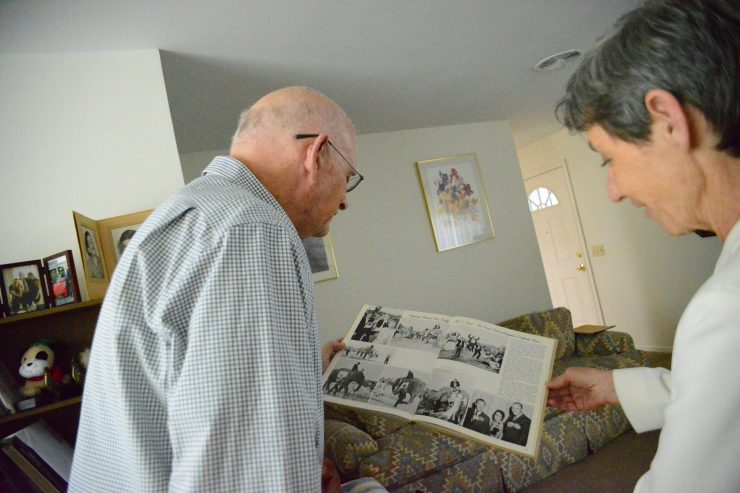 On Thursday, Sept. 7, 2017, Keith Dyer passed away at the age of 75. Jon recounted to friends at Chapman that in the days prior to his passing, he had asked Keith, “How was I able to be so lucky to have had a brother like you?” Keith responded in kind, “Well, how was it that I am so lucky to have a brother like you, Jon?” While neither could agree who was actually the lucky one, there is no doubt of the happiness, joy and love they each shared for each other. Anyone should be so lucky to have the kind of family they had in each other. We will miss Keith, who was a beloved member of our Chapman Family.

Dorothy Dyer, World War II-era elementary school secretary, was not the kind of woman who took no for an answer – unless it was a “no” of her own.

If you ask Jon Dyer ’62 who he takes after in his family, he’ll smile, laugh and say he probably has his late mother’s obstinate streak as well as her fierce commitment to her family.

Dorothy’s youngest son, Keith – Jon’s little brother – was born with cerebral palsy, among many other physical impairments. When Dorothy was told that Keith would not walk, she became determined that he would. She had that same defiant response when doctors told her that Keith would never speak and that he would be better off under institutional care.

Growing up, Jon had a front-row seat as he watched his mother challenge the odds set out for his brother. Her determination and the dedicated care given by medical therapy specialists made a lasting impression.

After graduating from Chapman, Jon built a career with Pfizer pharmaceuticals on the East Coast, but when his mom’s health began to fade he packed up his life and returned to the family home in Palo Alto, Calif., to take on the role of Keith’s caregiver. He makes sure his brother has a comfortable life supported by a backbone of brotherly affection. Now it’s Jon who’s the determined advocate saying “no” when necessary.

The Realm of Potential

Jon and Keith don’t get many visitors – Keith’s fragile health doesn’t allow for it. In fact, Jon almost never leaves Keith’s side. But today offers a rare opportunity to open their home.

Jon answers the door at the pretty corner house his parents bought in the 1970s – the one with drought-tolerant plants ringing a synthetic lawn. It’s a little past 10 a.m. and Keith is cycling through mile three on his goldenrod stationary Schwinn.

The scuttle-whir of the bike slows as Keith calls out, “Jon – how far?”

The pedaling resumes, a little faster this time.

This visit is the first time that Janeen Hill, dean of Crean College of Health and Behavioral Sciences, and Jon have met, giving them a chance to talk about their shared passion: the future of medical caregiving. Because he has seen how the right kind of comprehensive care can change lives, Jon is supporting the future of therapeutic health care at Chapman University.

With a gift through his living trust, Jon is establishing his legacy at Chapman via an endowment for Crean College. Additionally, he is making leadership gifts during his lifetime to fund the annual Jon P. Dyer ’62 Fellowship, which provides critical research support for Crean programs such as Communication Sciences and Disorders, Athletic Training, Marriage and Family Therapy, Physician Assistant Studies and Physical Therapy.

“We’re at the crossroads of new discovery and how patients are helped,” says Hill, Ph.D. “And our students need to be able to translate. They need to know about new discoveries and how to turn them into care.”

“I can’t think of a more dynamic career with more change every day or with more movement every day,” Jon says of therapeutic-care providers.

Jon’s own career started in information analysis in the Air Force before he transitioned to the business side of Pfizer. After years of caring for Keith at home, Jon has acquired skills with IVs, injections and home healthcare regimens – enough that some of Keith’s doctors tell him he could instruct.

“I don’t want another job,” Jon says with a laugh.

Across the living room, Keith carefully dismounts his bike after listening to his pedometer tell him he’s finished the three-mile course. As he waits for his attendant to assist him, Keith answers questions about his life with his brother.

When they were kids, who was the prankster?

“Oh, it was Jon – he’d tease me, but I’d tease him back,” Keith says affectionately, tilting his head in Jon’s direction. Jon confirms this, adding that Keith is adept at the joking riposte and loves to let him have it.

Keith excuses himself as he moves to the next part of his daily routine. Before he went blind in his 20s, Keith would watch Giants baseball games on TV with his mom. He still keeps up with his favorite team by listening to the broadcasts.

Not a lot of people ask Keith questions.

“People underestimate him. They direct all their questions at me when they want to know his information, but I tell them, ‘Heck, why don’t you ask him yourself?’” Jon says.

For Keith and Jon, days are carefully planned but frequently punctuated with medical issues – some they’re prepared for and others they’re not. Right now, pneumonia is the chief concern.

Through it all, a deep and purposeful love endures. Keith depends on Jon, and Jon embraces his brother with care and respect.

“His whole life, doctors have been coming at him with needles, poking him. He never complains,” Jon says. “Keith’s got to be the bravest person I know.”