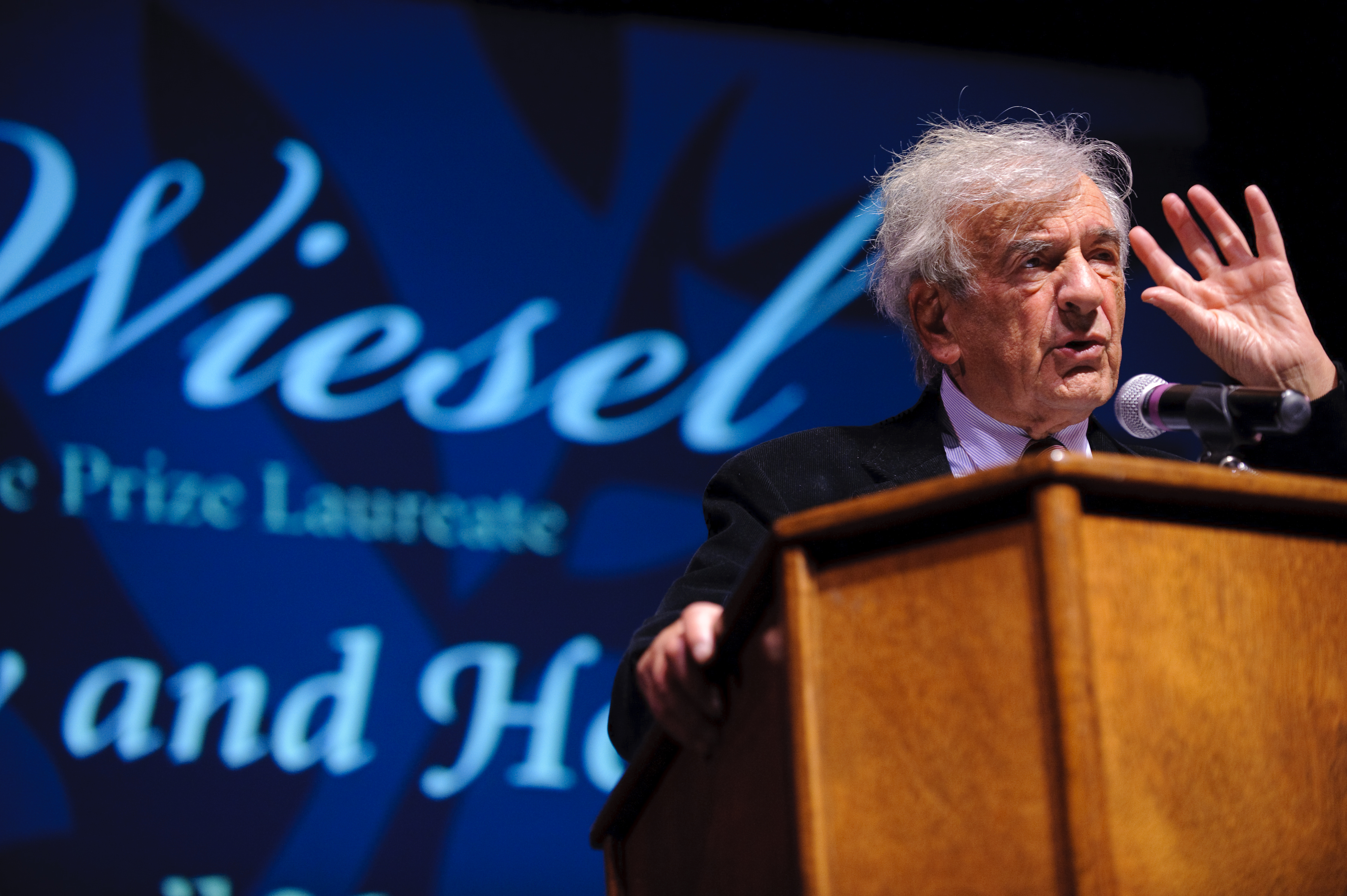 Elie Wiesel, pictured here during his 2010 visit, will return to campus for an April visit.
Arts & FilmCampus & StudentsUncategorized

Chapman University mourns the passing of Elie Wiesel, 87, Nobel Peace Prize Laureate, Holocaust survivor and witness, author, and humanitarian. “We feel tremendous gratitude for the weeks that Professor Wiesel spent as Distinguished Presidential Fellow at our university from 2011-15, as well as for his previous two visits in 2005 and 2010,” said Marilyn Harran, Ph.D., director of Chapman’s Rodgers Center for Holocaust Education and Stern Chair in Holocaust Education. Author of some 60 books and the recipient of innumerable awards and honors, “Elie Wiesel remained a person of exceptional humility and kindness,” Dr. Harran said.  “While knowing that no single individual could be the voice of the six million murdered in the Holocaust, he nonetheless devoted his life to witnessing on their behalf and sustaining memory, as well as inspiring people around the world to reject neutrality and speak out against injustice, racism, violence, and hatred.”

In those visits to Chapman, Wiesel focused his time on students, meeting with small groups of undergraduates and giving campus talks in Memorial Hall and Fish Interfaith Center. His fight for human rights sprung from the horrors of the Holocaust he witnessed as teenager imprisoned in the Nazi concentration camps at Auschwitz and Buchenwald. Too many people remained silent then, he said, and he always reminded students to be wary of blind passivity in their own time.

“Nobody knows everything. The thing is: Do we have the questions? I love questions because they contain the word ‘quest.’ Beware of answers. Remain with the quest,” Wiesel told an audience of nearly 300 students, faculty and guests during a 2012 visit.

“For all of us at Chapman University, students and faculty alike, he was our teacher,” Dr. Harran added. “He loved visiting with classes in many different disciplines, from English to history to music, and each year especially enjoyed his time with John Boitano’s French students when he could converse with the students in the language he loved so much.  He was the inspiration for, and mentor of, our program in Holocaust history and education.  He believed that ‘life is made up not of years, but of moments,’ and he gave us unforgettable moments that will remain with us forever.  As a university, we send our deepest condolences to his beloved wife Marion and son Elisha and all the Wiesel family.”

Wiesel first visited Chapman University in April 2005, at the invitation of Dr. Harran, Stern Chair in Holocaust Education at Chapman. The visit fell on the 60th anniversary of Wiesel’s liberation from the Buchenwald concentration camp.  During that visit, he participated in dedication ceremonies for the University’s Sala and Aron Samueli Holocaust Memorial Library and received an honorary doctorate in humane letters.  His second visit came in April 2010, when he spoke to the university community and was guest of honor at a gala marking the 10th anniversary of the Rodgers Center for Holocaust Education and the Stern Chair in Holocaust Education.

That same year he accepted a five-year appointment as a Distinguished Presidential Fellow at Chapman.  In that role, Wiesel visited Chapman annually to meet with students and offer his perspective on subjects ranging from Holocaust history to religion, languages, literature, law and music.