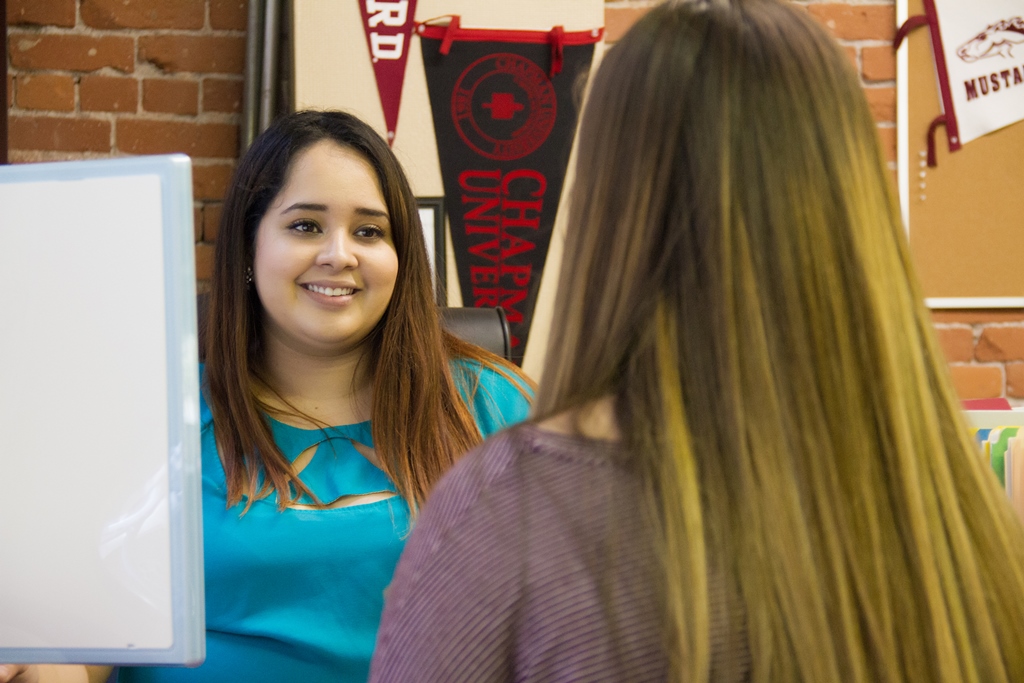 Martha Rivera ’12 was 11 years old when she saw a sign for piano lessons less than a block from her family’s upstairs apartment in Santa Ana, Calif.

“But we didn’t have money to pay the $5,” remembers Rivera, the daughter of immigrants. “My mom exchanged labor, doing cleaning, for me to take classes.”

Soon, Rivera was taking five or six classes a day on various instruments, heading straight to the Orange County Children’s Therapeutic Arts Center after school and staying until the founder, Ana Jimenez-Hami, Ph.D., walked her home at night.

“It got to the point where I was taking too many classes and my mom said, ‘You’ve got to start taking care of this yourself,’” Rivera says. “So I started filing and answering phones, teaching, helping with music therapy.”

So it was that Jimenez-Hami, also a part-time faculty member at Chapman University, became the first of Rivera’s many mentors, starting her on a path that took her to a charter high school for the arts and then to Chapman, where a merit scholarship, institutional aid and a Pell Grant helped her earned degrees in psychology and Spanish. From there, it was on to Harvard, where Rivera earned an Ed.M. in human development and psychology in 2013.

Today, Rivera is the operations and programs manager for Nicholas Academic Centers in Santa Ana, an after-school program where high school students receive academic services, mentoring and social services to help them reach college and succeed there.

“It’s such a rewarding job,” Rivera says. “But I don’t think of it as a job, because I was them.”

Part of her workday is filled with administrative tasks, meetings, and seeing to day-to-day operations. But when 3 p.m. hits and the students arrive, it’s all about them. Rivera is hands-on, helping review scholarship applications, personal statements and college applications.

“I ask, ‘Which one scares you? Let’s look into that one and try to go there,’” she says. “Because when they give you their college list, it’s always safety schools. I have kids who have a perfect GPA and amazing SAT, and it’s a lack of belief. They say, ‘But people in my school don’t go there.’ I say, ‘You’re going to be the first one.’”

This fall, Rivera will apply to doctoral programs on the East Coast, with a goal of working in national education policy.

Plenty of work ahead

“My area of interest is helping Latino men and supporting them, because Latina women consider higher education at a higher level than Latino men,” she says.

Her own path was paved by the financial support as well as the guidance she received at Chapman from such mentors as Anaida Colon-Muniz, Ed.D., an associate professor in the College of Educational Studies, and Rueben Martinez, a Presidential Fellow who was the recipient of a MacArthur Foundation “genius grant” after turning a Santa Ana barbershop into a Spanish-language bookstore.

“The financial aid I got at Chapman, I don’t know what I could have done without it,” Rivera says. “When I say my parents are low income, I truly mean low income.”

Though her parents had aspirations for their children, they had limited awareness of the possibilities. Her father, a day laborer who waits for work at a local Home Depot, showed little reaction when she told him she got into Harvard.

Chapman University professors are regular guests at the Nicholas Academic Centers through the Chapman Visiting Scholars Series, now in its sixth year. Visit the Nicholas website to read about Chancellor Daniele Struppa’s talk there this past fall.

“Then he went on a construction site and was wearing a baseball cap with Harvard on it,” she says. “The man who hired him said, ‘I noticed the Harvard sticker on your car and the baseball cap.’ When my dad told him, ‘My daughter is going to Harvard,’ I guess the guy flipped out, high-fiving him.

“My dad came home and hugged me and said, ‘I’m really proud of you.’”