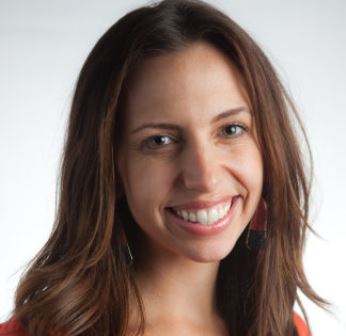 The click of the candidate’s heels on pavement. The clatter of pots and the chatter of cooks in the kitchen of a Mexican restaurant. The voices of voters meeting the congresswoman as she campaigns for the U.S. Senate.

Those are the sounds of a report by Mary Plummer ’07, a former editor-in-chief of theThe Panther who is now a senior politics reporter
for KPCC Southern California Public Radio.

Though Plummer got her start in print and still writes regularly for the station’s web site, radio became her primary medium when she joined KPCC in 2011 after earning a master’s degree in journalism from Columbia University in 2010.

Plummer’s platform will be television Tuesday, May 10, when she serves as a panelist for a debate on San Diego public television station KPBS featuring five of the candidates for the open Senate seat, led by California Attorney General Kamala Harris and Sanchez.

Prepping for the primary

With the Senate vacancy and the Republican and Democratic presidential nominations for once still contested as the June 7 California primary approaches, Plummer knows the spotlight is going to be bright as the candidates descend on the state.

“It’s a really exciting time to be a political reporter,” she said. “There’s just so much interest around the primary in California, and this is the first time in a long time California could play such a crucial role.”

An English and journalism major at Chapman, Plummer’s true career preparation was in the offices of
the Panther. She cites Susan Paterno, director of the journalism program in the Department of English, as “a great mentor.”

“I basically spent my whole college career working on the paper, and almost every weekend at times,” Plummer said. “It was such a training ground in terms of having the responsibility of running a staff and overseeing the publication of the paper every week.”

After working in the Los Angeles bureau of a newspaper from Japan, Plummer went to Columbia to gain more multimedia and broadcast skills. From there, she landed a fellowship with ABC News in London.

“I was there when WikiLeaks was happening and covered Julian Assange at the courthouse, and the royal engagement happened while I was there,” Plummer said.

After returning to L.A. she worked as a full-time freelancer for ABC News until joining KPCC as an associate producer. She moved to reporting, at first covering education and the arts, before being promoted to political reporter in 2015.

As the California primary and November election approach, her stories have included looks at the nuts-and-bolts of party registration and primary voting, as well as the attitudes of young voters, who have registered in droves.

“I was really struck by their passion and interest in some more radical or outside candidates, really wanting to see big changes,” Plummer said after a day in the field interviewing young voters in Santa Clarita. “I sense a lot of frustration and also enthusiasm for trying to improve things. Sometimes you hear that millennials tend to be apathetic and don’t care. My sense is the opposite: They’re people who care about making the country better.”

Instead of simply describing that in words, Plummer now tries to show what that sounds like. But however she tells the story, Plummer said she has found work that speaks to her.

“I love reporting,” she said. “So I think I’ll continue down the reporting path in whatever form that might take. I really love interviewing people and reporting and learning about my own community.”