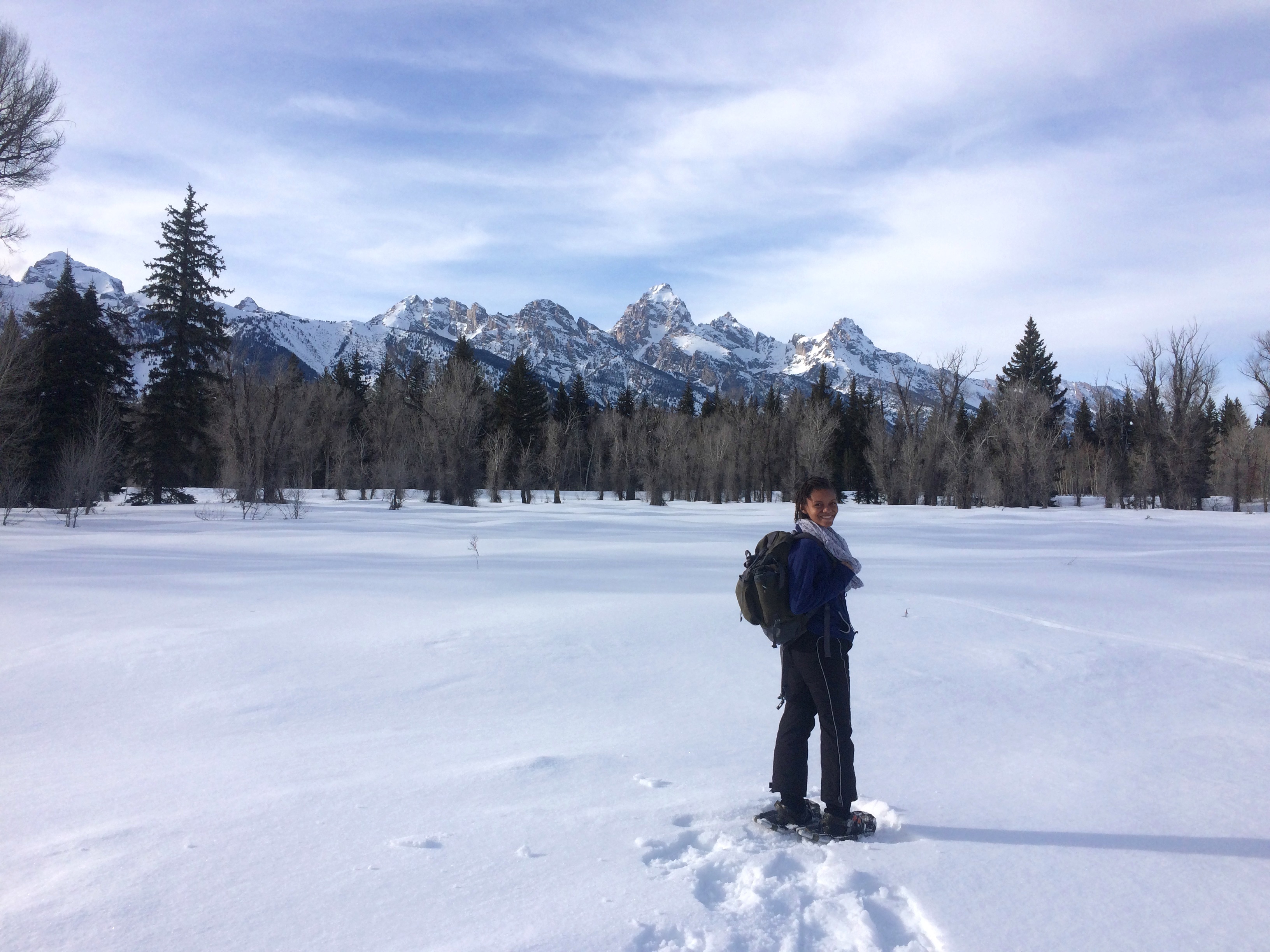 A world of sustainable impact For students in Chapman's Environmental Science and Policy program, an Earth Day ethos resonates all year long

From Paris to Sacramento, the Gulf of Mexico to the wilds of Montana, the Randall Dining Commons to the White House lawn, Chapman University students are putting environmental science into practice and turning that practice into impact.

Leah Thomas ’17, pictured above, is one of those students. Even as a child, she loved the outdoors and wanted to see natural environments protected. The Missouri native was a sophomore studying biology when she discovered the
Environmental Science and Policy
program at Chapman.

Since then, she has used remote-sensing data to study the cause of oxygen depletion plaguing waters in the Gulf of Mexico. Last summer, she worked with the Student Conservation Association in Kansas, educating visitors about the first settlement of former slaves west of the Mississippi. This spring, she attended the National Park Service Academy in the Grand Tetons, helping to develop ways to increase diversity of thought, religion, ethnicity and race in the National Parks. And come summer, she’ll work at the White House, using the grounds as a tool to educate youngsters about conservation practices, sound fertilizer use and the effects of climate change.


Earth Day provides an annual reminder that our global environment faces a multitude of stresses. So does the idea of Earth Day – or even Earth Week or Earth Month – mean much to people who make an everyday commitment to environmental care?

“For me, Earth Day is kind of like Christmas – always exciting and never gets old,” says Environmental Science and Policy student Leah Thomas ’17. “Even if people take part in environmental projects only on this day, that’s fine, because the more who can help, the better. And the hope is that more people will then want to extend that commitment throughout the year.”

On Saturday, April 23, Clayton Heard ’16 and many of his Chapman student colleagues will take part in a ROOTS native habitat restoration project in the Upper Newport Bay Nature Preserve.


“I can definitely say that this major has changed my life,” Thomas says of the Environmental Science and Policy program. “My experience has been amazingly positive. For the rest of my life I know I’ll be dedicated to issues of the environment and social justice, working where those two things connect. I can completely say that this major made me who I am right now.”

The program was launched at Chapman seven years ago to train students to think scientifically, socially and politically about solving the big environmental challenges, says Professor Jason Keller, Ph.D., head of the life and environmental sciences faculty at Chapman.

“We’re trying to prepare our students to be scientists who can communicate with policymakers,” Keller adds.

Examples abound of students and alumni of the program whose work is already having a substantial impact.


The small-town atmosphere in Davis evokes Hoffacker’s experience in the Environmental Science and Policy program, she says.  She and her Chapman colleagues agree that they have benefited from the spirit of collaboration that predominates.

“One thing that stands out is the mentorship the professors provide,” Hoffacker says. “They are still very much a part of my life and my research career.”

“Everyone knows and likes everyone else,” Thomas notes. “If someone hears about an internship or job opportunity, they want everyone to know about it.”

Professor Keller adds that for those who champion sustainability, the concept can influence all the ways people interact.

“It’s not just about environmental consciousness; there’s also economic and social sustainability,” he says. “Our students are smart enough to see the connections and get excited about them.”


Feinstein has worked alongside energy auditors in home evaluations, distributed high-efficiency shower heads and LED light bulbs to low-income and veteran communities and educated residents on steps they can take to make their homes energy efficient. On Earth Sunday her team will staff a booth at the city’s
Earth Day celebration
– and invite visitors to power a clean-energy marquee by pedaling a specially-equipped bicycle.

The environmental science major who started the
Mission Environment
club at Chapman says some of her happiest moments in the program come from the community service component.

“People are so grateful. It seems like such a small thing, giving them shower heads and light bulbs. But it will really save them money,” she says. “It’s helpful.”


Chapman University’s annual
Environmental Audit
is the capstone project for Environmental Science and Policy students, who research and provide recommendations on everything from water to waste, purchasing to energy management.

“The students are amazing – they blow me away with the quality of the data they bring back,” says Mackenzie Crigger, Chapman’s manager of energy and sustainability who teaches the capstone course.

This year’s audit focuses on reducing and recycling waste generated on campus. Each week, students dig through the trash and then communicate to the campus community based on what they find.

“If they find 1,000 Starbucks cups, then we know that we need to encourage greater use of reusable mugs,” Crigger says. The campus Starbucks and Einstein Bagels both offer a 10-cent discount to those who opt for mugs over paper cups.

In its four years, the audit has helped drive change on campus, Crigger notes. In 2014, a survey of 1,500 students, faculty and staff found that 95 percent were interested in seeing more native landscaping on campus. Now that change is evident around the Historic Core buildings.

“The students quickly realize that people care about and get excited by the work they’re doing,” Crigger says. “Their research has impact.”


Display photo at top: As an intern with the National Park Service, Leah Thomas ’17 explores Grand Teton National Park. This summer she will work at the White House, educating young visitors about issues of conservation and climate change.