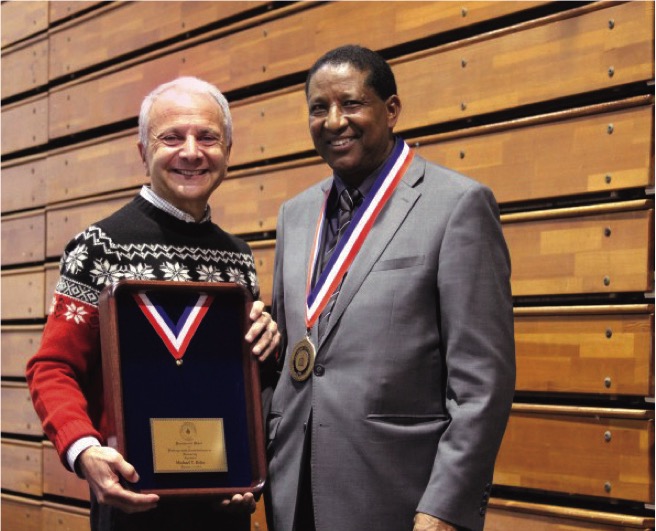 Michael Belay, the Chapman University public safety officer who sold his home to help pay for a school in his hometown of Tembien, Ethiopia, now has experience with receiving as well as giving.

At the annual Chapman staff holiday breakfast in December, Belay was presented with the highest honor awarded by the University – the Presidential Medal for Distinguished Contributions to Humanity.

For more than 15 years, Belay has dedicated much of his life to raising funds and supplies for the people of Tembien, where many children have been orphaned by the AIDS epidemic and the country’s wars. Belay founded Hands Across the Planet to Poor Youth (HAPPY), a nonprofit to provide ongoing support to Tembien (happyinethiopia org). Among his most recent actions was to refinance his car to buy uniforms and school supplies for students in the village.

Chapman University, its staff and students, as well as many other benefactors, have also contributed to HAPPY, providing the school with computers and the town with ambulances and other necessities.

“Michael Belay is an incredible example of the Chapman spirit and the Schweitzer way,” said President Jim Doti, referencing Albert Schweitzer, the 20th-century humanitarian known as the “guiding spirit” of Chapman. “(Michael) reflects so much honor upon our University.”

Belay is currently working to bring clean water to Tembien – a project that may cost several million dollars. Clean water could prevent myriad illnesses borne of pollutants and other impurities in the current supply.

“Chapman is my home, and you are my family,” Belay said, accepting the medal from President Doti. “How could I ever have imagined how wonderful my dream of America would be, how thankful I am to live in the United States of America, and how happy I am to be in the Chapman Family. This award symbolizes hope and dreams.”