Chapman Trustee Emeritus Jack Lindquist, Disneyland’s first president, has passed away. In the following letter to the campus community, President Jim Doti remembers Lindquist as a mentor to him and a source of inspiration to students.


I’m sorry to report the death of Jack Lindquist. Chapman University has lost a trustee, a benefactor and a great friend.  Jack lived a storied life that had an impact far beyond Orange County.

In 1955, Walt Disney hired Jack as Disneyland’s first advertising manager. In 1988, Michael Eisner appointed Jack as Disneyland’s first president. Regarded as one of the most creative and knowledgeable marketing men of the 20
th
Century, Jack Lindquist is credited with creating many of the unique programs that made not only Disneyland but Disney attractions around the globe so successful.

Jack retired from Disney on November 18, 1993, Mickey’s 65
th
birthday, saying that a 65-year-old mouse didn’t need a chaperone anymore.  Despite his official retirement, Jack considered himself to be “In Service to the Mouse” for the rest of his days.  Indeed, he gave that title to his memoir of his 38 years with the Disney Company.  For the cover reviews of that book, I had the honor of writing:  “This book is not only a captivating story of the formation of institution that has become an indelible part of our culture, it’s also the best primer on marketing I’ve ever read.”

After leaving Disneyland, Jack formed a distinguished marketing consulting firm, The Lindquist Group. He also was generous in giving his time and expertise to serving the community.  In addition to becoming a Chapman trustee, Jack provided dedicated and exemplary leadership through his involvement with Orange County’s professional sports teams and convention and visitor bureaus as well as organizations like the Boy Scouts and Bowers Museum.

In 2013, as a result of the generosity of Jack and his lovely wife, Belle, we dedicated the Jack and Belle Lindquist Dream Room in our Leatherby Libraries. It includes two study rooms and two large display classes that feature Jack’s incredible collection of Disney memorabilia.  It was important to him to give his personal collection a home where it would be appreciated and displayed for the enjoyment of others.

Over the last five years, more than 500 students have been privileged to go one-on-one with Jack during his visits to one of Chapman’s most popular classes, “The Pursuit of Happiness and Knowledge: Walt Disney and Charles Darwin,” taught by Brian Alters.  In fact, Jack met with that class just a few weeks ago on Thursday, Feb. 4.  Professor Alters tells me that his students loved Jack Lindquist and that one could hear a pin drop in the 90-student class when he spoke.

Jack and I frequently had breakfast together, usually at Rockwells in Villa Park.  He was my marketing guru, and I learned so much from him.  Jack was also my friend, my mentor and my hero.  Upon learning of his passing, I visited our Lindquist Dream Room, then strolled over to the Lindquist Arts Plaza.  Spending time in these places that he and Belle gave to our campus helped me rekindled wonderful memories of Jack and all he meant to me and our University.  His legacy will live on forever at Chapman.  We are a better place because of his friendship and support.

At last week’s State of the University Address, I recounted our great achievements over the last quarter of a century.  Those achievements came about because of people like Jack Lindquist, who served our University with verve, passion and boundless energy.  They are the real heroes of Chapman’s rise to prominence.

I will send out information about services as soon as it is available.

I will greatly miss this sweet gentle man.  May he rest in peace. 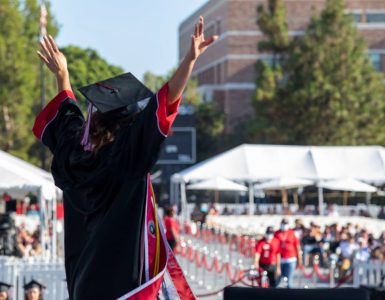 Chapman University Celebrates Commencement for the Classes of 2020 and 2021

Nearly 4,000 graduates from Chapman University’s Class of 2020 and Class of 2021 were welcomed back to campus for in-person Commencement ceremonies over two weekends in July and August. With friends and family in...

At 5 PM on June 23rd, an email security setting was applied and caused forwarded emails to be returned as “undeliverable”. The issue has been fixed.  If you the “undeliverable” error...