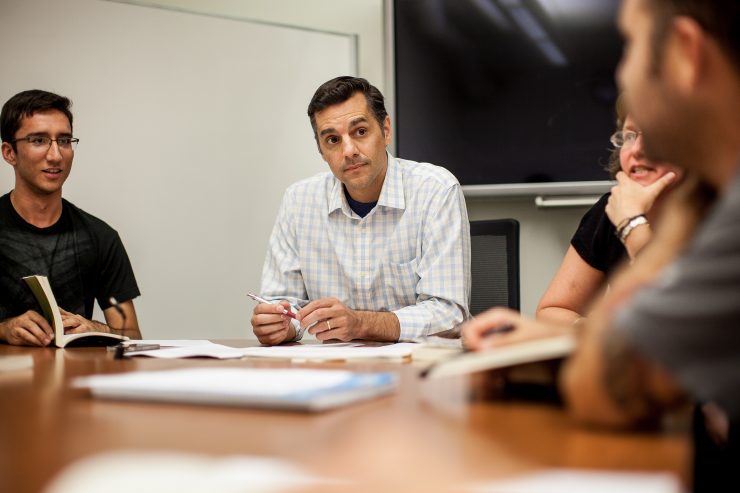 This is a time of change for Gregory Daddis. He has moved from New York to Southern California, from a career in the Army to civilian life, from teaching at West Point to directing the new War and Society master’s degree program at Chapman University. So what does it all mean?

“It means I’ll have longer hair,” Daddis said with a smile not long after moving into his new office in Roosevelt Hall.

For Chapman, it means that the Department of
History
and the broader University community have an important new voice to enrich the conversation. Before moving to Chapman, Daddis, Ph.D., was an Army colonel and professor at the U.S. Military Academy. A 1989 West Point graduate, he has served in many Army command and staff positions and is a veteran of Desert Storm and Iraqi Freedom, earning the Bronze Star.

The author of three books, including
Westmoreland’s War: Reassessing American Strategy in Vietnam
(2014), Daddis launched the Chapman program this fall excited to collaborate with Chapman’s nationally recognized program in Holocaust Studies as well as Peace Studies and the Center for American War Letters, among other research and study centers. He hopes to attract as students military officers, policymakers, secondary-school teachers and others eager to explore “how societies think about war, go to war, deal with war,” he explained.

“What if peace never comes? What if war only engenders new enemies and new threats?” Gregory Daddis asked those questions in a Los Angeles Times op-ed a year ago, when he was an Army colonel. Now he leads a new Chapman master’s degree program in War and Society.

In that spirit of exploration, we sat down with Daddis to ask about the new program and how research and experience inform his perspective on war in the 21
st
century.

Chapman Magazine:
How has your military background prepared you to lead this program?

Daddis:
I think you have to understand the problems associated with war itself before you can think more broadly about the consequences of war on society. The longer I’ve been doing this, the more I’ve been interested in the relationship between war and society, and the less about military tactics, per se. Vietnam was a way for me to see the implications of war. The Vietnam War had huge social consequences for the United States that lasted much longer than the war itself. I think we’re still talking about overseas operations through the lens of Vietnam. For me, that helps with understanding the consequences of war.

CM:
So your research and scholarship color your thinking about war?

Daddis:
Without a doubt. I’ve become much more of a pacifist. I mean, I think I’m a realist. The myth of war is useful on so many levels, for so many reasons – politically, socially. I’m not so naïve as to think that we are going to be able to do away with war. At the same time, over the last 15 to 20 years I’ve questioned the efficacy of military force overseas in terms of achieving political objectives, in large part because the consequences of achieving those objectives through the use of force is so high. That’s one of the problems this program will address. We don’t talk about the social implications (of war). If you think about the narrative in the United States, when we talk casualties it’s always how many Americans have died. We never talk about how many Iraqi civilians were killed or how many Afghan civilians were killed. So for this program to try to get at the issue of the social dislocation, disruption and death caused by war is important. Because as a society, we’re just not comfortable talking about it, for whatever reason.

CM:
What do you want students to take away from the program?

Daddis:
I want them to have the capacity to view war holistically as a human phenomenon. To see that war is not simply about tactics and strategy, that it’s not simply about political decisions. War is a very unfortunate but integral part of who we are as human beings and how societies relate to one another. I want students to have that appreciation leaving here and then enter into the national conversation about the problems of war. That would mean this program has more than just academic merit, and that’s clearly what we’re striving for.