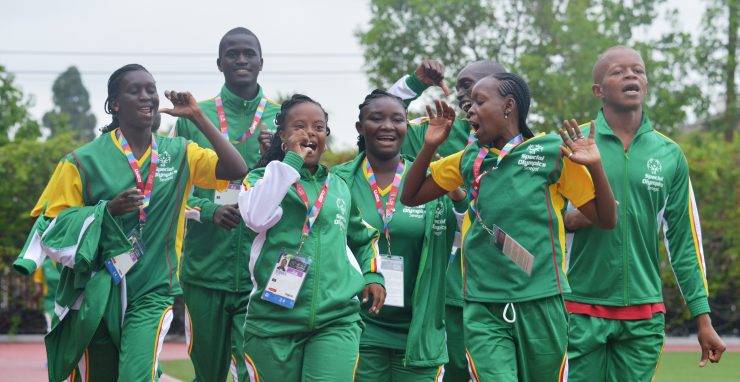 During a hot and steamy July day, athletes hopped and zigzagged through an obstacle course on Chapman University’s Wilson Field, navigating a tough assemblage of hurdles and cones. A Canadian training for the 2015 Special Olympics World Games in Los Angeles was undaunted. She conquered the course set up by Chapman’s athletic training students and was ready for more.

“My legs are like burning up,” said Kara Summer, a bowler with the Canadian delegation. Then she caught her breath, laughed and trooped off to yoga.

That was just one of many moments that defined Chapman University’s experience with the 2015 Special Olympics World Games Los Angeles this summer. Students, faculty, alumni and staff rolled up their sleeves and helped the Games come to life before and during the international event, which attracted athletes from 165 nations. A small army of volunteers contributed to the Olympic spirit that permeated Chapman this summer.

It seemed to surprise everyone how many lives changed because of their work with Special Olympics, which was founded to advance the values of respect, inclusion and opportunity for adults and children with intellectual disabilities.

“You really help people. I’ve been hearing stories of people we’ve screened and identified with hearing loss then going on and getting hearing aids,” said Khanh Vu, (M.S. ’16), a speech student who helped conduct the athletes’ hearing screenings.

Helping the athletes and coaches with their pre-Games training was a crew of M.S. students and faculty from Chapman’s Athletic Training Education. The team set up and staffed workout stations ranging from yoga to dynamic stretching.

Chapman undergraduates also were closely involved, despite the summer timing of the games. Scott Lee ’16 helped plan the morning’s activities and organized the cadre of Chapman volunteers needed to run the program.

“It looked pretty hectic earlier this morning. Now it’s looking really good,” he said as music, laughter and activities unfolded around him.

Then when the World Games opened in Los Angeles, 17 graduate students from Chapman’s Communication Sciences and Disorders Program from Crean College volunteered with the Special Olympics Healthy Hearing Program. The students were led by Professor Judy Montgomery, Ph.D., director of Chapman’s program, and the global clinical coordinator of the Special Olympics Healthy Hearing Program.

“They love it and they recognize what a difference it makes in athletes’ lives,” Montgomery said of the student volunteers.

Although she has led Healthy Hearing screenings at nine World Games over the years, the experience never grows old for Montgomery. In Los Angeles, she watched a Samoan athlete get fitted with a new pair of hearing aids that made him beam as he nodded that yes, he could hear again.

Top image: members of the team from Senegal take a warmup lap around the track during their stay on campus. (Photo By Dennis Arp)