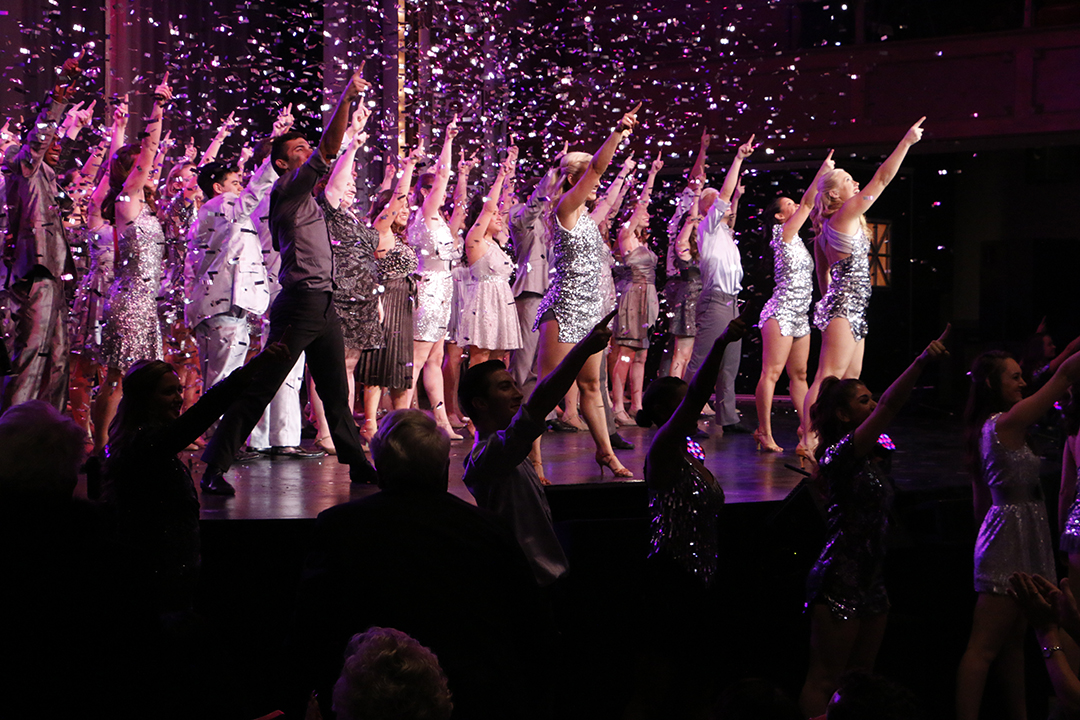 See you next year at the Musco Center! American Celebration 2015 raises more than $2 million for scholarships in its final year at Memorial Hall

Nostalgia was in the air as Chapman University’s 34th American Celebration was performed for the last time on the stage of iconic 1920s-era Memorial Hall. But it was excitement for the future that won the evening at the signature Broadway revue and glittering gala that is the University’s main fundraiser for student scholarships.

Nostalgia was in the air as Chapman University’s 34
th
American Celebration was performed for the last time on the stage of iconic 1920s-era Memorial Hall.

But it was excitement for the future that won the evening at the signature Broadway revue and glittering gala that is the University’s main fundraiser for student scholarships.

Next year’s American Celebration will be performed in “the new crown jewel of Chapman University, the Musco Center for Arts,” President Jim Doti said during the show as he introduced a video tour of the elegant new Marybelle and Sebastian P. Musco Center for the Arts, which opens March 19, 2016.

Doti paid tribute to the many philanthropists in the audience, led by the Muscos, who brought to reality the center, which will be both an elegant performance hall and state-of-the-art teaching facility.

That brand of generosity was abundantly evident Saturday night, too, as American Celebration soared to success. Thanks to the nearly 800 friends and donors in attendance, more than $2 million was raised for scholarships. Woven throughout the program were students’ heartfelt thanks, conveyed both in video montages and by several of the evening’s performers.

As always, American Celebration was an opportunity to honor special guests. Receiving the 2015 Citizen of the Year Award was David Pyott, vice chairman of the University’s Board of Trustees and past chairman of the board and chief executive officer of Allergan. Honored with the 2015 Lifetime Achievement in the Arts Award was actor James Caan, best-known for his Academy Award-nominated performance as Sonny Corleone in
The Godfather
.

The talent of student singers and dancers was showcased in a revue of some of Broadway’s greatest show tunes
,
including
Lullaby of Broadway
from
42nd Street
and
America
from
West Side Story
.

And as has been their tradition in American Celebration shows, President Doti and President’s Cabinet member Julianne Argyros made a guest appearance, dancing their last dance to the tune of
I Remember It Well
from
Gigi
. Doti has announced his
plans to step down
from the presidency in 2016, handing the reins to Chancellor and Presidential Designate Daniele Struppa. As Doti and Argyros twirled about the stage, a photo montage of their past performances, including a memorable rendition of
Shall We Dance
from
The King and I
was projected behind them.

But this was no sad swan song. The opening of the new Musco Center for the Arts will usher in a new era and spectacular opportunities to showcase student talent on a professional stage, Argyros said.

“This is going to allow our students, all of these wonderful students you’re going to see here tonight, to actually showcase their talents in a way that we can’t on this stage,” she said. “I’m so excited.”
american celebration student scholarships